'A Sweatshop Firing on All Cylinders': What It's Like to Work at Amazon at Christmas

In the third installment of The Amazon Diaries, a worker describes the madness that is the six-week ‘peak’ season 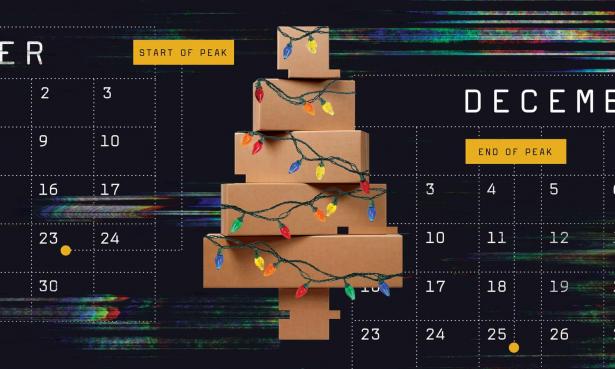 Time at Amazon is measured in the amount of “peak” you work. Peak, we are told, is the time when Amazon associates shine. We are forged in peak; we are made complete by packing and shipping the Christmas and holiday dreams of people worldwide. Records are set, and we have fun while making history.

Peak refers to the “peak” season, lasting from the week before Black Friday through Christmas. During this six-week period, the volume of packages running through our fulfillment, sortation and delivery centers soars. Full-time workers receive “mandatory extra-time”, working up to 60 hours per week with exhausting 11.5-12 hour days, while part-time workers are encouraged to take as many extra shifts as possible. Our workforce doubles with “seasonal” workers who are paid less, not given benefits, and put on a restrictive time-off allowance, ensuring they’ll be working through the holiday season.

Walking into my sort center, where packages are organized on pallets ready to be sent out to customers, it’s clear it’s mid-peak. Posters are scattered throughout the warehouse showing an associate holding an electronic scanner, like she’s in a photoshoot for Charlie’s Angels, with the slogan, “Be All Peak Pro”. We’re told to post our #Peak18 rallying cry to the company’s Instagram page, @amazonvestlife. My friend tells me that if I ever post him to @amazonvestlife he’ll kill me.

Guiding us through a “stand up”, management tells us we’re going to “kill it” today, to set new records for boxes processed on our shift. Aren’t we psyched to break records? Management claps and hoots. We’ll be rewarded, they say: a handful of associates randomly drawn may win a Kindle or an Echo Dot. My friend whispers to me, “We set the records, pay us in cash.”

Soon the early excitement and anticipation of the first few days of peak madness have dissipated; we’re mostly just exhausted, and counting down the days until it’s over.

Walking on to the sort floor the day after Cyber Monday, boxes of various sizes flood the conveyor belts. The normally orderly warehouse has trash strewn everywhere, random pieces of wood, tape, gloves and broken product on the concrete floor. Shoddily built pallets of boxes, normally stacked and wrapped with relative precision, are cascading on to the ground.

Our friends and co-workers walk past us, their feet dragging like zombies after having worked the last 10 hours, many for six days in a row. A few folks who learned their lesson last year refuse extra-time – they say that one five-hour shift is hard enough, doing two is unbearable.

As I reach my station I bargain with a friendly manager not to go to the hardest trucks for the day, my shoulders and neck aching from 10 hours of non-stop pushing the day before (and the day before, and the day before). He does me a solid and lets me take on an easier task. I see stress in the bags under his eyes, knowing that he is expected to work around the clock under immense pressure. A manager in his cohort had walked out mid-shift earlier in the week, fed up and pissed off.

The whir of the belt picks up, marking the beginning of shift. From the jump we’re pushed to the limit, and it won’t stop until the moment we leave. Blue lights blink, signaling that we’re working too slow. A new “seasonal” manager looking to impress upper management comes by and tells us to pick up the pace while he just walks by without offering a hand. Thanks, buddy.

Several of us in break room conversations, in the back of trucks, in the smoking area, and working the line, whisper and share articles about worker actions during peak: “Did you hear they are going on strike in Europe?” “I heard they are walking out the day before Christmas in Germany, Italy and Spain.” “I hear people are walking out in Minnesota this year – it’s happening in the US!” “Did you hear what happened in New York? I heard they were forming a union.” “We need to do that here!”

And just like that, the day after Christmas, peak ends. Managers start talking to floor leaders, asking which seasonal workers busted their ass.

Last year, that was when the culling of seasonal associates began, people fired mid-shift by text message. Not an hour later, texts went out seeking volunteers for overtime for the next two weeks. The text was accidentally sent to some of those who had just been fired. One of them, my friend, kicked a pallet over, said “fuck this” and marched out the building. Promises of conversion vanish for some, while others say good riddance and are on their way.

Our backs may be aching, our bodies exhausted, our pay still the same, but at least we broke some records. America’s sweatshop firing on all cylinders; hundreds of millions of “customer promises” fulfilled. @amazonvestlife.