Yes, There Is a War Between Science and Religion

In the end, it’s irrational to decide what’s true in your daily life using empirical evidence, but then rely on wishful-thinking and ancient superstitions to judge the “truths” undergirding your faith. 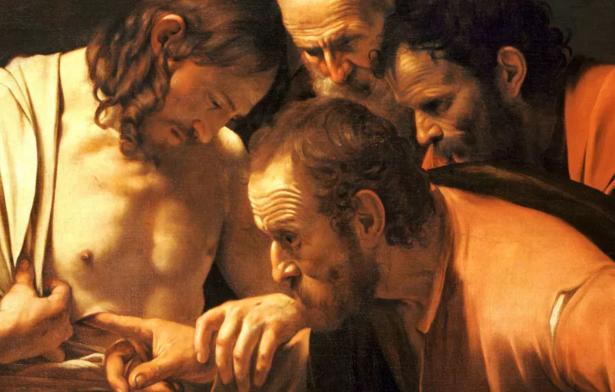 Doubting Thomas needed the proof, just like a scientist, and now is a cautionary Biblical example,Caravaggio/Wikimedia Commons

As the West becomes more and more secular, and the discoveries of evolutionary biology and cosmology shrink the boundaries of faith, the claims that science and religion are compatible grow louder. If you’re a believer who doesn’t want to seem anti-science, what can you do? You must argue that your faith – or any faith – is perfectly compatible with science.

And so one sees claim after claim from believers, religious scientists, prestigious science organizations and even atheists asserting not only that science and religion are compatible, but also that they can actually help each other. This claim is called “accommodationism.”

But I argue that this is misguided: that science and religion are not only in conflict – even at “war” – but also represent incompatible ways of viewing the world. 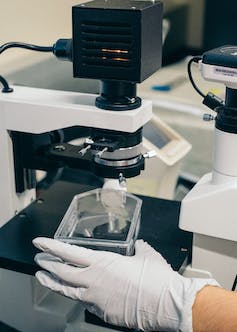 The scientific method relies on observing, testing and replication to learn about the world. Jaron Nix/Unsplash, CC BY

My argument runs like this. I’ll construe “science” as the set of tools we use to find truth about the universe, with the understanding that these truths are provisional rather than absolute. These tools include observing nature, framing and testing hypotheses, trying your hardest to prove that your hypothesis is wrong to test your confidence that it’s right, doing experiments and above all replicating your and others’ results to increase confidence in your inference.

And I’ll define religion as does philosopher Daniel Dennett: “Social systems whose participants avow belief in a supernatural agent or agents whose approval is to be sought.” Of course many religions don’t fit that definition, but the ones whose compatibility with science is touted most often – the Abrahamic faiths of Judaism, Christianity and Islam – fill the bill.

Next, realize that both religion and science rest on “truth statements” about the universe – claims about reality. The edifice of religion differs from science by additionally dealing with morality, purpose and meaning, but even those areas rest on a foundation of empirical claims. You can hardly call yourself a Christian if you don’t believe in the Resurrection of Christ, a Muslim if you don’t believe the angel Gabriel dictated the Qur’an to Muhammad, or a Mormon if you don’t believe that the angel Moroni showed Joseph Smith the golden plates that became the Book of Mormon. After all, why accept a faith’s authoritative teachings if you reject its truth claims?

Indeed, even the Bible notes this: “But if there be no resurrection of the dead, then is Christ not risen: And if Christ be not risen, then is our preaching vain, and your faith is also vain.”

“The question of truth is as central to [religion’s] concern as it is in science. Religious belief can guide one in life or strengthen one at the approach of death, but unless it is actually true it can do neither of these things and so would amount to no more than an illusory exercise in comforting fantasy.”

The conflict between science and faith, then, rests on the methods they use to decide what is true, and what truths result: These are conflicts of both methodology and outcome.

In contrast to the methods of science, religion adjudicates truth not empirically, but via dogma, scripture and authority – in other words, through faith, defined in Hebrews 11 as “the substance of things hoped for, the evidence of things not seen.” In science, faith without evidence is a vice, while in religion it’s a virtue. Recall what Jesus said to “doubting Thomas,” who insisted in poking his fingers into the resurrected Savior’s wounds: “Thomas, because thou hast seen me, thou hast believed: blessed are they that have not seen, and yet have believed.” 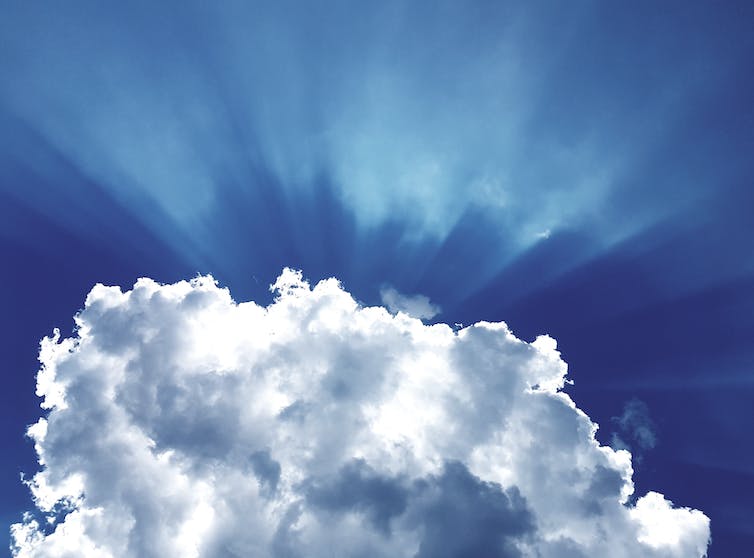 Two ways to look at the same thing, never the twain shall meet. Gabriel Lamza/Unsplash, CC BY

But different religions make different – and often conflicting – claims, and there’s no way to judge which claims are right. There are over 4,000 religions on this planet, and their “truths” are quite different. (Muslims and Jews, for instance, absolutely reject the Christian belief that Jesus was the son of God.) Indeed, new sects often arise when some believers reject what others see as true. Lutherans split over the truth of evolution, while Unitarians rejected other Protestants’ belief that Jesus was part of God.

And while science has had success after success in understanding the universe, the “method” of using faith has led to no proof of the divine. How many gods are there? What are their natures and moral creeds? Is there an afterlife? Why is there moral and physical evil? There is no one answer to any of these questions. All is mystery, for all rests on faith.

The “war” between science and religion, then, is a conflict about whether you have good reasons for believing what you do: whether you see faith as a vice or a virtue.

So how do the faithful reconcile science and religion? Often they point to the existence of religious scientists, like NIH Director Francis Collins, or to the many religious people who accept science. But I’d argue that this is compartmentalization, not compatibility, for how can you reject the divine in your laboratory but accept that the wine you sip on Sunday is the blood of Jesus? 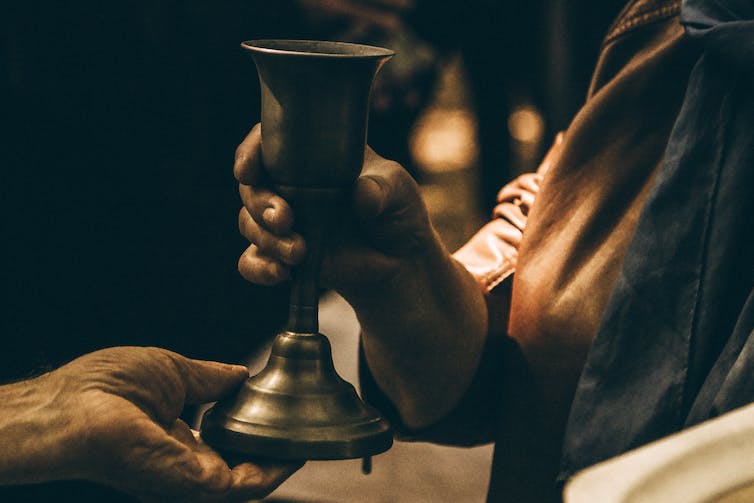 Can divinity be at play in one setting but not another? Jametlene Reskp/Unsplash, CC BY

Others argue that in the past religion promoted science and inspired questions about the universe. But in the past every Westerner was religious, and it’s debatable whether, in the long run, the progress of science has been promoted by religion. Certainly evolutionary biology, my own field, has been held back strongly by creationism, which arises solely from religion.

What is not disputable is that today science is practiced as an atheistic discipline – and largely by atheists. There’s a huge disparity in religiosity between American scientists and Americans as a whole: 64 percent of our elite scientists are atheists or agnostics, compared to only 6 percent of the general population – more than a tenfold difference. Whether this reflects differential attraction of nonbelievers to science or science eroding belief – I suspect both factors operate – the figures are prima facie evidence for a science-religion conflict.

The most common accommodationist argument is Stephen Jay Gould’s thesis of “non-overlapping magisteria.” Religion and science, he argued, don’t conflict because: “Science tries to document the factual character of the natural world, and to develop theories that coordinate and explain these facts. Religion, on the other hand, operates in the equally important, but utterly different, realm of human purposes, meanings and values – subjects that the factual domain of science might illuminate, but can never resolve.”

This fails on both ends. First, religion certainly makes claims about “the factual character of the universe.” In fact, the biggest opponents of non-overlapping magisteria are believers and theologians, many of whom reject the idea that Abrahamic religions are “empty of any claims to historical or scientific facts.”

Nor is religion the sole bailiwick of “purposes, meanings and values,” which of course differ among faiths. There’s a long and distinguished history of philosophy and ethics – extending from Plato, Hume and Kant up to Peter Singer, Derek Parfit and John Rawls in our day – that relies on reason rather than faith as a fount of morality. All serious ethical philosophy is secular ethical philosophy.

In the end, it’s irrational to decide what’s true in your daily life using empirical evidence, but then rely on wishful-thinking and ancient superstitions to judge the “truths” undergirding your faith. This leads to a mind (no matter how scientifically renowned) at war with itself, producing the cognitive dissonance that prompts accommodationism. If you decide to have good reasons for holding any beliefs, then you must choose between faith and reason. And as facts become increasingly important for the welfare of our species and our planet, people should see faith for what it is: not a virtue but a defect.