Atlanta Journal-Constitution Op-Ed asks Georgia to reconsider the educational limits it places on undocumented students. The Universal Declaration of Human Rights declares all people everywhere have certain inalienable rights - but not in Georgia. 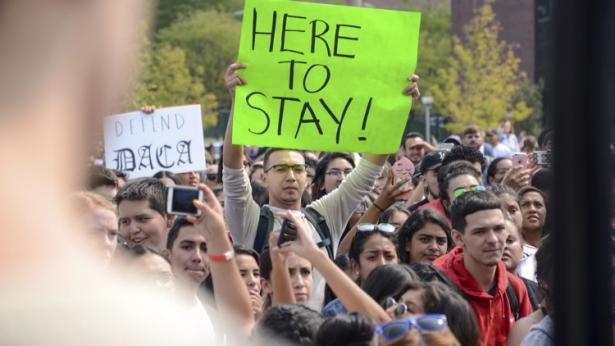 Across the country, including last year in Denver, students have protested the erosion of protections and opportunities for young immigrants on America's college campuses., credit: Tatiana Flowers/AP // Atlanta Journal-Constitution

This year, we have watched as police officers tear-gassed children, policymakers proposed a border wall, and families were separated before our very eyes. With the recent celebration of International Migrants Day and the 70th anniversary of the Universal Declaration of Human Rights, we must ask ourselves, how much do we as a nation truly love our neighbors and value the rights and dignity of the migrants who live next door?

Around the world, International Migrants’ Day was celebrated on Dec. 18. The day commemorates the 1990 signing of the Migrant Workers Convention, a landmark multilateral United Nations treaty that formally recognizes the connection between migration and human rights. This year, International Migrants’ Day fell just one week after the 70th anniversary of the Universal Declaration of Human Rights (UDHR).

The UDHR was drafted by a committee appointed by the newly formed United Nations in the years following the end of World War II, when humanity was reeling from the aftermath of the Holocaust, two atomic bombs, and the potential of mass human destruction. The UDHR was proclaimed on Dec. 10, 1948, and set forth the foundation of international human rights law.

Unlike any other declaration before it, the UDHR held that all people everywhere have certain inalienable rights, not based on the country in which they are born, but by virtue of their humanity. While the Universal Declaration of Human Rights is the most widely translated document in the world and has inspired the constitutions of more than 90 countries, most Americans are unfamiliar with it or believe that human rights violations only take place in distant countries far from home.

However, in a small classroom in Atlanta at Freedom University, an underground freedom school that meets down the street from the birth home of Dr. Martin Luther King Jr., students study international human rights law and carry passport-shaped copies of the Universal Declaration of Human Rights in their pockets.

These students are not just any students. They are undocumented students whose human right to education is denied to them by the state of Georgia, which bans them from equal access to public higher education. Students are banned from the top public universities in Georgia not because they do not meet the academic requirements of admission, but because of the way they arrived in the United States as migrant children.

These bans are particularly shameful because the same public universities that ban undocumented students today also banned black students in 1960. It was in part because of educational segregation that black students of the Atlanta Student Movement issued “An Appeal for Human Rights” in March 1960 that sparked mass student protests and desegregation efforts throughout Georgia.

In the state of Georgia today, we are in the midst of a human rights crisis. Migrants face grave, ongoing human rights violations, including the right to education. Article 26 of the Universal Declaration of Human Rights states that “everyone has the right to education… and higher education shall be equally accessible to all on the basis of merit.” Yet, in 2010, the Georgia Board of Regents passed Policy 4.1.6 and 4.3.4, banning undocumented migrant youth from admission to its top public universities and from qualifying for in-state tuition rates, respectively. These policies have been in place for eight years, barring thousands of undocumented students from higher education, despite their academic merits and their payment of state taxes that fund the universities they cannot attend.

Georgia is widely considered the most punitive state toward migrant youth seeking higher education, as it is the only state in the country to ban undocumented students -- as well as DACA recipients -- from admission to selective institutions of public higher education. Georgia is also the also the only state to pass an “Anti-Sanctuary Campus Bill” to punish any private university that declares itself a sanctuary of learning for undocumented immigrant youth.

In banning undocumented status from attending its most prestigious public universities, the state of Georgia promotes discrimination on the basis of national origin and immigration status, as well as race. Underlying the right to equal access to education is the right to be free of discrimination, both in impact and intent, and the affirmative right to equality. These rights are protected and guaranteed by the Convention on the Elimination of All Forms of Racial Discrimination (CERD) and the International Covenant on Civil and Political Rights (ICCPR), both of which the United States has ratified, in 1994 and 1992 respectively.

On occasion of the 70th anniversary of the Universal Declaration of Human Rights, Freedom University joined forces with Project South and the Penn Transnational Law Clinic to submit a formal complaint to the Office of the UN High Commissioner for Human Rights, as well as several UN human rights experts, highlighting these well-documented violations of human rights against undocumented migrant youth in Georgia.

In light of the United States violations of core international legal obligations under the ICCPR and CERD, the complaint invites the UN human rights experts to make a site visit to Georgia and meet with human rights advocates, civil rights veterans who fought racial discrimination at the same public universities in Georgia during the 1960s, and undocumented students who suffer daily as a result of Georgia’s current discriminatory policies.

The complaint also urges the UN experts to issue a collective statement, broadcast internationally, condemning the state of Georgia’s actions and urging the United States to ensure that the rights of undocumented students in Georgia are protected. Finally, the complaint encourages UN experts to engage in follow-up communications or visits with the U.S. Department of Education and the Georgia Board of Regents to monitor progress on eliminating Georgia’s discriminatory policies in higher education.

We need to recommit ourselves to advancing the human rights of migrants around the world -- the migrants on shores on other continents and the migrants in the shadow of border walls -- but also the migrants behind the kitchen door and the migrants in our classrooms. We must send a strong message to Georgia that banning young people from school had no place in the Jim Crow era, and it certainly has no place in the 21st century. Educational policies that violate international human rights laws need to be repealed so that every young person, regardless of where they are born or what papers they have, has equal access to higher education.

[Laura Emiko Soltis is the executive director of Freedom University, an Atlanta-based school that provides free college-level classes, college application and scholarship assistance, and social justice leadership training for undocumented students in Georgia. She is an Ashoka Fellow and a Ford Foundation Public Voices Fellow. You can follow Freedom University on Facebook @freedomuniversitygeorgia, and on Twitter @FU_Georgia

Co-author Azadeh Shahshahani is legal and advocacy director at Project South and a past president of the National Lawyers Guild. She tweets @ashahshahani.]