The Trump administration has made a point to eviscerate regulations of all types. 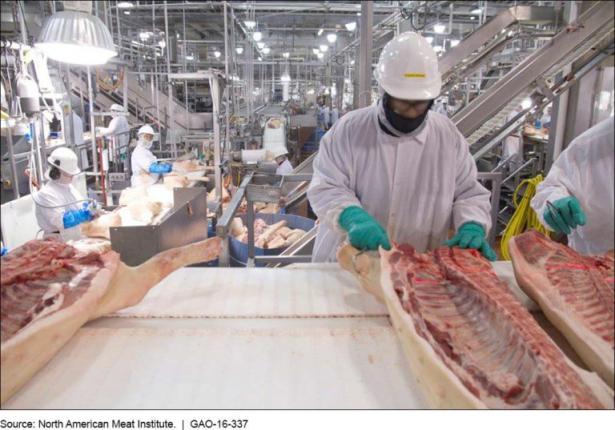 The Trump administration has made a point to eviscerate regulations of all types. Part of its hyper-capitalistic agenda is to make sure profits are maximized regardless of the result to the broad majority of people. One area where this is the case, which has flown well-below the radar, are attempts by the United States Department of Agriculture to make major changes to the rules governing chicken and pork processing plants under the guise of updating and modernizing rules that are allegedly outdated.

In reality the changes are all about drastic, and very dangerous, increases in line speeds and a reduction of safety inspections that ensure the processed meat is not contaminated. These changes are still “proposed” rules and the government has to jump through some hoops before implementing them.

That being said, the government has quite a bit of latitude to force the rules through, although of course that could be challenged in court. However, at the current moment at least, it does seem likely that they will go through, much to the detriment of working-class people.

Meatpacking as an industry is already very dangerous work. According to the Occupational Safety and Health Administration:

“The Bureau of Labor Statistics (BLS) reports injury and illness rates for the Meat Packing Industry as 2 ½ times higher than the national average. More serious injuries requiring work restrictions or days away from work are more than 3 times higher in meat packing than U.S. Industries as a whole.”

“Meatpacking workers also experience an illness rate — such as for disorders like carpal tunnel syndrome — that is almost 17 times as high as the average for all other industries.”

“The poultry industry has the eleventh highest number of work-related amputations and hospitalizations of all industries reporting to the government — more than saw mills and the construction industry… The high injury and illness rates in meatpacking plants contribute to staggering worker turnover running at 60 percent annually per plant.”

More directly, the NELP outlines the overall harsh conditions faced by many workers in the meatpacking industries:

“Hog slaughter workers already endure exceedingly harsh working conditions to provide cheap meat to American consumers. They work in cold, wet, noisy, and slippery conditions. Workers on the slaughtering and processing lines make tens of thousands of forceful repetitive motions on each and every shift. They work with large and dangerous hooks, saws, and knives to cut and break down the hogs. They process thousands of hogs per hour. Hog slaughter and processing workers also push huge dangerous trolleys and vats of meat, clean and maintain very dangerous equipment, and pack 40 to 50 hams per minute.”

And as it concerns the poultry industry:

“Workers in the industry stand shoulder to shoulder on both sides of long conveyor belts, most using scissors or knives, in cold, damp, and loud conditions, making the same forceful cuts or movements thousands upon thousands of times a day, every day, as they skin, pull, cut, debone, and package the chickens… These are disassembly plants, where a typical medium-size plant processes 180,000 birds a day. On most lines, a typical workers handle 40 birds a minute.”

The meatpacking industry is making big profits off this state affairs. There are not a huge number of companies reaping this profit given that monopolization in the country is significant. Looking at the “four-firm concentration ratio,” essentially the percentage of business controlled by 4 firms, it is fairly obvious how highly monopolized the industry is.

Eighty-five percent of the beef processing, 65 percent of lamb processing and 65 percent of pork processing is controlled by just four companies in each industry, some of them, of course, having some overlap. They are booking big profits too. Pilgrim’s Pride, for instance, raked in $718 million in profits in 2017.

Tyson Foods had roughly $1.7 billion in profits this year. Smithfield Foods, in 2016, hit a record high for profit in the first half of the year, taking in $447 million. So clearly, they are raking in the dough. Now, these companies are pushing hard, and the government is obliging, a race to the bottom, to drastically reduce safety standards in order to make even more profits possible.

The easiest way to increase profits for meatpacking companies is pretty straightforward, pack more meat. The way this is mainly done, is increasing line speeds. As we mentioned before, line speeds are already high.

In both industries, now, the USDA is proposing rules that would eliminate any restrictions on line speed. They claim their proposed rulemaking is rooted in the results of voluntary pilot projects that prove there are no real problems with decreasing line speed or the number of workers focused on the safety of the meat.

These are fairly stunning claims because the actual results of those programs appear to show the exact opposite. Many of the claims for the proposed rulemaking center on the results of the New Poultry Inspection System established in 2014. As it concerns line speed, this makes no sense, as the NPIS explicitly limited line speed to 140/bpm and explicitly stated this should not be raised or changed until the NPIS was implemented on a wide-scale, which it has not.

Government research has also shown that even in plants authorized to operate at 175/bpm they were rarely exceeding 131/bpm. Raising serious questions about how, given the massive amount of injuries already, that safety would not suffer tremendously with increased line speeds.

Something further underlined when noting that at pilot project pork processing plants that were allowed to run higher line speeds that:

“In a 4.5-month period in 2017, two workers from the Clemens Food pork plant in Pennsylvania suffered injuries that required hospitalization, while another worker suffered an amputation.”

And in 2016, JBS was sanctioned by OSHA when it was found that line speeds were going so fast the company was denying or seriously delaying employees ability to go to the bathroom to avoid slowing down the line.

The pork processing rules also include the reduction of USDA Food Safety Inspection Service employees and replacing them with plant workers who are untrained, and who there would be numerically fewer of. To quote again from the NELP:

“USDA claims that the new proposed inspection system can increase food safety by removing FSIS inspectors from the slaughter line and allowing FSIS inspectors to conduct more offline pathogen testing. But that has not been proven to be true for poultry plants in the New Poultry Inspection System (NPIS). The agency’s recent release of testing data in poultry plants shows that 30 percent of the NPIS chicken plants failed the agency’s performance standard compared to only 13 percent that are still using traditional inspection. Further, the USDA admits in the preamble to the proposed rule that the increase in offline FSIS activities in hog plants will not be much greater than is done now. In addition, the agency stopped collecting salmonella samples at hog slaughter in 2011, so the agency’s risk assessment for the New Swine Inspection System needs to be questioned.”

“Based on data gathered from a series of Freedom of Information Act requests that cover the period January 1, 2012 through November 30, 2016, Food & Water Watch has found that the five … pilot plants had more regulatory violations when compared to five comparably sized non-[pilot] plants.”

Even further, there is serious concern from some academics that the USDA is also using improper studies to prove their point about the line-speed issue. In terms of why they would do this, it is again worth noting from a National Employment Law Project report that:

“USDA calculates the economic benefits of the proposal in terms of higher profit for pork processing companies. Assuming establishments increase their line speeds by 12.49 percent and have a packer margin of $4.10 per head, an average large establishment’s surplus could increase by approximately $2.04 million.”

Either way, what is entirely clear that despite claiming to be “pro-worker” the Trump administration is certainly happy to let plenty of workers die or grievously injured on the job, not to mention risking the health of tens of millions of worker consumers who may be touched by tainted meat if these changes are, as looks likely, forced through.

Eugene Puryear is a founding member of the Party for Socialism and Liberation and is on the editorial board of Liberation News.