First Step Act Has Sinister Implications for the Poor and Marginalized

The modest sentence reductions in the bill are so narrow that veteran reform advocates say the long-term, harmful provisions of the legislation — including its reliance on racist risk assessment mechanisms and expansion of electronic monitoring... 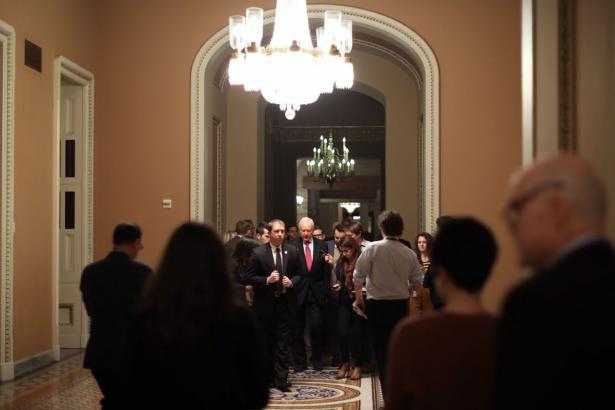 Sen. Orrin Hatch talks to reporters as he heads to begin debate on a sentencing reform bill called the First Step Act at the US Capitol on December 17, 2018, in Washington, DC. The Senate overwhelmingly passed the bill.,Chip Somodevilla/Getty Images

The Senate passed the First Step Act on Dec. 18th in an 87-12 vote after vigorous debate over legislative amendments that would have gutted much of the bill. The legislation now moves to the House for a vote later this week, where it is expected to pass.

The latest version, which came to the Senate floor via another, unrelated bill, advanced Monday with stripped-down provisions and additional measures demanded by law enforcement groups, including the National Sheriff’s Association and “tough-on-crime” Republicans.

Senators voted against a set of amendments to the bill Tuesday that reform advocates deemed “poison pill” amendments ahead of the legislation’s passage. Republican Senators Tom Cotton and John Kennedy authored three amendments that advocates say would have unacceptably whittled down the already feeble legislation.

The amendments would have excluded felons from early release, prerelease custody and supervised release; notified victims before a prisoner is allowed to transfer out early; and tracked the effectiveness of the anti-recidivism programs. Advocates, however, say the amendments would have led to further stigmatization of incarcerated people, risked re-traumatizing victims of crime, and discouraged the neediest prisoners from participating in recidivism-reduction programming.

In a stunning reversal, Senate Majority Leader Mitch McConnell indicated last week that he would bring the bill to the Senate floor after Senate Judiciary Committee Chairman Chuck Grassley expressed frustration over McConnell’s inaction. President Trump, the Fraternal Order of the Police, and for-profit prison corporations GEO Group and CoreCivic all support the legislation.

“We can look at this legislation as immediate relief for a very small number of people, but what are [Black and Brown] communities going to look like in 20 years?”

Some conservative senators are already touting the bill’s passage in the Senate as a legislative victory after Congress’s previous effort at bipartisan prison reform in the wake of the Ferguson uprising in 2014-15 largely stalled. Others, like Senators Cotton and Kennedy, have decried the bill as weakening the Republican Party’s “law-and-order” identity.

The bill is limited to federal prisons, which only constitute about 13 percent of the overall US prison system, or about 180,000 of 2.1 million incarcerated people in US jails and prisons. Further, prison reform advocates argue the bill systematically excludes casualties of the war on drugs, since the legislation does not make any sentence reductions retroactive other than those under the 2010 Fair Sentencing Act, which somewhat reduced the disparity between crack and powdered cocaine sentences.

The legislation could liberate several thousand prisoners hit with harsh drug sentences prior to the 2010 Fair Sentencing Act, and represents the most significant blow to mandatory minimums since the 2010 legislation was passed.

Still, the modest sentence reductions in the bill are so narrow that veteran reform advocates say the long-term, harmful provisions of the legislation — including its reliance on racist risk assessment mechanisms and expansion of electronic monitoring and other forms of privatized surveillance — outweigh its benefits. For instance, the bill contains no measures that would prevent private prison corporations from charging those they place on electronic monitors from paying fees associated with the devices.

“It’s important for us to focus on the long-term impacts of any legislation that we put in place,” said Vivian Nixon, a formerly incarcerated person and director of College and Community Fellowship. “We can look at this legislation as immediate relief for a very small number of people, but what are [Black and Brown] communities going to look like in 20 years when … there’s a huge percentage of people with criminal justice histories in very targeted, under-resourced communities who are bogged down with these electronic monitors and payments that they can’t make?”

CoreCivic and GEO Group, the nation’s largest for-profit prison corporations, strongly back the bill, and have urged representatives not to adjourn before passing it. Both companies are expanding heavily into reentry and post-prison rehabilitation services, and the legislation presents new opportunities to boost their profits, authorizing a $375 million expansion of post-prison services. Moreover, Koch Industries, whose attorney Holden helped shape First Step, has worked to privatize reentry services through funding the Texas Public Policy Foundation’s “Right on Crime” operation.

“This is like a ‘Get Out of Jail Free’ card for extremely low-risk, well-resourced people who find their way into federal prison.”

Nixon points out that because of the way risk assessments measure static factors like a person’s income, work history or where they lived at the time of their offense, many poor people of color will not even be eligible for early release under electronic monitoring, while those deemed low-risk, such as white-collar criminals, will likely be able to go free without any electronic surveillance. “This is like a ‘Get Out of Jail Free’ card for extremely low-risk, well-resourced people who find their way into federal prison,” Nixon said.

Moreover, she worries that the bill sets a precedent for expanding “e-carceration” strategies that could spread beyond the federal prison system. “Whatever the federal system does, there are many states [that] are likely to follow suit, which means we’re not only talking about the small number of federal prisoners, we’re talking about 2 million people in jails and prisons around the country,” she said.

Nixon argues the bill was conceived of and drafted predominantly by “grasstops” nonprofit staffers, lawyers and people in government, not the communities of color most directly impacted by policing and the prison system. Further, the bill’s prioritizing of low-risk, well-resourced prisoners is a reflection of Kushner’s familial experiences with the prison system: His father Charles was released from prison in 2006 after serving two years for illegal campaign contributions.

A real reform bill, she says, would have made the 2015 Sentencing Reform and Corrections Act retroactive, focused less on risk assessments and more on “needs assessments” to provide adequate programming for incarcerated people, and would have included provisions to limit public-private partnerships.

“What is in this federal bill that says we will not double the current federal population on community supervision?”

DeAnna Hoskins, president of JustLeadershipUSA, which seeks to reduce the carceral population in the US, agrees, telling Truthout that static factors disproportionately affect risk assessments for Black and Brown communities. For instance, over-policing of predominantly Black and Brown schools can result in early criminal records for young people of color. Criminal records resulting from civil rights violations such as stop-and-frisk and racial profiling can, and often do, play into risk assessments.

“What is in this federal bill that says we will not double the current federal population on community supervision, especially when the cost is shifted from the government to the individual?” Hoskins said.

She also points out that it’s not just casualties of the war on drugs who are systematically carved out of the bill, but also prisoners with many disabilities, since the bill only outlines screenings for prisoners with learning or cognitive impairments. The bill also carves out undocumented immigrants, who constituted more than half of federal criminal prosecutions in 2016 and make up about a third of all people sent to federal prisons annually.

“I think what will happen at the end of the day is that the arc of all these exclusions will kind of cement these problematic policies around immigrants.”

Paromita Shah, who is associate director at the National Immigration Project of the National Lawyers Guild, argues that the way the legislation singles out migrants’ unauthorized reentry into the US as one of the most serious classes of offenses is troubling, and that the legislation gives the administration the tools to exacerbate the problems caused by the administration’s “zero tolerance” policy, which has led to separations of thousands of migrant families at the border.

“If you’re an immigrant, the presumption under our laws is that, [immigrants] shouldn’t have access to these [rehabilitation] services because [they’re] just not going to be here,” Shah told Truthout. “I think what will happen at the end of the day is that the arc of all these exclusions will kind of cement these problematic policies around immigrants.”

She also points out that the legislation funnels anyone presumed to be “deportable” into what’s known as the “Institutional Hearing Program,” which holds deportation hearings for immigrants while they are still in federal prison. Shah says the program undermines due process protections and remains inaccessible in many federal prisons. The legislation forces people to undergo the program as a condition for applying for time credits, ultimately pushing more immigrants toward the likelihood of deportation.

The Trump administration’s draconian immigration policies have also proved lucrative to these private prison profiteers as well, and Shah worries the bill will likewise only further cement GEO Group and CoreCivic’s ability to profit from the federal detention system in how it singles out unauthorized reentry.

“There may not be an immediate impact right now, but I feel like it’s a tradeoff,” Shah said. “Pushing out a bill like this while federal prosecutions of [unauthorized reentries] remain one of the highest prosecuted offenses in our criminal justice system, it just seems like a real disconnect.”

Nixon, Hoskins and Shah all hope to see Democrats take a shot at deepening reforms the Senate just passed, while putting accountability measures in place, when they take control of the House in January.

“It’s just a baby step. If they want a true first step,” Hoskins says, Congress would have had a real debate. “If this is true bipartisanship, then what are [lawmakers] scared of, and why the need to push this bill through? Because it protects them, [white-collar criminals] and not the most marginalized.”

Candice Bernd is an editor/staff reporter at Truthout. Her work has also appeared in several other publications, including The Nation, In These Times, the Texas Observer, Salon, Rewire.News, YES! Magazine and Earth Island Journal, as well as in Truthout's anthology on police violence, Who Do You Serve, Who Do You Protect? She received two awards from the San Francisco Press Club in November, and the Dallas Peace and Justice Center's annual journalism award in December 2016. Follow her on Twitter: @CandiceBernd.

Truthout works to spark action by revealing systemic injustice and providing a platform for progressive and transformative ideas, through in-depth investigative reporting and critical analysis. With a powerful, independent voice, we will spur the revolution in consciousness and inspire the direct action that is necessary to save the planet and humanity. For more on our editorial approach, please read Remaking Media in the Pursuit of Justice and A Call to the Media: Let’s Go Beyond “Preserving Democracy.” https://truthout.org/