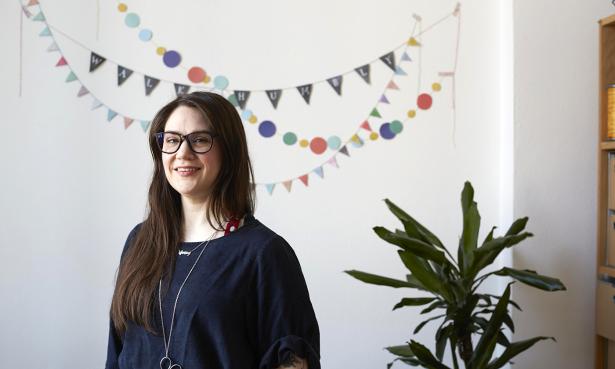 Sarah Corbett, award-winning campaigner, author and founder of the Craftivist Collective, recently released her new book How to Be a Craftivist in the United States. , Jenny Lewis

Sarah Corbett never dreamed a cross-stitched teddy bear could change her life and how she approached her career. But looking back, she realizes that that’s when it all started.

Corbett, a professional campaigner for causes and charities, was preparing to board a train from London to Glasgow to give yet another workshop on training people as activists.

But she was exhausted, stressed, and burning out. With a five-hour journey ahead of her, she couldn’t work because it made her travel sick. Feeling a hankering to do something creative, she picked up the tiny cross-stitch kit. As she took her seat and began to work, she immediately noticed something.

“Separating the threads, you have to go slowly so that it doesn’t tangle, and it made me aware of how tight my shoulders were, and that’s something I hadn’t checked in with myself about,” she says. “As activists, my colleagues never checked in with each other—‘Are you OK?’ You just do lots of campaigning, because that’s what you’re passionate about.”

People began to ask her what she was doing. “I immediately thought to myself, ‘Oh, if I was cross-stitching a Gandhi quote, we could have a conversation about that.’ But the fact that a stranger was asking me what I was doing, it made me think how powerful it was that I wasn’t giving eye contact, I wasn’t shouting at them with megaphones, and they were asking me.”

That made Corbett realize that there might be better ways to engage with activist communities. She had just moved to London, but was having a hard time fitting in.

“A lot of them were very extroverted, very loud, very transactional, sometimes quite demonizing—or treating people like robots or just doing stalls or petitions,” she says.

By contrast, the repetitive action of cross-stitching made her aware of how tense she was. The process was comforting and gave her space to ask herself whether she was really being an effective activist, or was she just doing lots of things to feel effective?

What Corbett discovered for herself on her train trip is known as “craftivism,” a term popularized by North Carolina activist Betsy Greer. With Greer’s blessing, Corbett spun it into her unique “gentle protest” approach, and a decade later has turned that epiphany into a high-impact career, the international Craftivist Collective and a whole lot of creative social change. Corbett’s book, How to Be a Craftivist: The Art of Gentle Protest (Random House, 2018), was just released in the U.S. and will be presented at SXSW in Austin, Texas, in March 2019.

Greer, for her part, has been surprised and delighted to see how the concept has spread across the globe. “For a while, you could track the word back to me,” she says. “Eventually I got an email from Africa. I was getting emails from people in places I’d never been that were way outside my demographic.”

Greer learned to knit from her grandmother before knitting was cool. She studied craft as a sociology student, and wrote her dissertation on knitting, DIY culture, and community development. That led to her first book, Knitting for Good: A Guide to Creating Personal, Social, and Political Change Stitch by Stitch (Roost Books, 2008).

In her research on crafting and activism, Greer began to realize that this was nothing new. She has traced craft as a form of resistance to tapestries of the disappeared under Pinochet’s regime in Chile, and diapers and headscarves made by Argentina’s Mothers of Plaza de Mayo. Even the legendary abolitionist Sojourner Truth engaged in knitting and needlework as a form of resistance.

Greer comes from a military family, so the war in Afghanistan affected her personally, with a cousin and a friend who served there. In the mid-2000s, she began a needlework series based on anti-war graffiti from around the world. Taking anonymous images—a bomb as a head on a human body, the Statue of Liberty holding a missile instead of a torch—and working them in cross-stitch, she illustrated the effects and toll of war: “How it embeds itself in our daily vocabulary in the news, in conversation, in our worries, even though in many cases, we are spared the actual gravity of war at our doorstep,” she wrote in an email.

Working on those pieces, she found, was a great way to explore her feelings about war. She created the series, she says, “to show that people all around the world are against war, but very few people actually make the decision to go to war.”

In the U.K., Corbett was taking the concept in new directions. In 2016, she and a small group from the Craftivist Collective teamed up with ShareAction, a movement for responsible investment, to organize a living-wage campaign aimed at the British retail giant Marks and Spencer. They used gift handkerchiefs with bespoke embroidered messages for the company’s board members and investors, then followed up by carefully cultivating relationships with them. The campaign eventually resulted in pay increases for the company’s 50,000 workers.

Other campaigns involved embroidered messages on small protest banners to be hung at eye level in public places and on embroidered hearts worn on sleeves. Last year, the Craftivist Collective created a campaign to support Fashion Revolution, a global movement launched after the 2013 Rana Plaza factory collapse in Bangladesh, which killed more than 1,100 garment workers. Makers dropped tiny, handwritten scrolls into the pockets of clothing sold by retailers who engage in unfair trade practices. The scrolls had messages such as, “Our clothes can never be truly beautiful if they hide the ugliness of worker exploitation.”

The idea, Corbett says, was to encourage them to be curious about who made their clothes, without making them feel judged, and give them options so they could join the movement, as well. The campaign resulted in global media on the homepage of BBC News, a double-page spread in The Guardian and rare coverage in fashion magazines because of Corbett’s “gentle protest” approach to activism.

The line between craftivism and artivism—the use of art in activism—is a fine one.

Greer says she intentionally chose craft as a way to reclaim a practice that has been historically demeaned and undervalued for thousands of years. Additionally, she says, she uses craft as a way to encourage people to be creative precisely because it’s not art.

Elizabeth Vega, who has been using art to empower and inform since the early days of the Black Lives Matter movement in Ferguson, Missouri, prefers to give the work the stature she feels it deserves—so she calls it artivism.

“It stems from the place that art and craft is something we all have within us,” Vega says, who has degrees in sociology and counseling psychology. “It’s a way to make sense of things and a way to have cultural intersections but also to process.”

She remembers the moment when she began to realize the power that art could have within the fight against racism in St. Louis. Her social justice group had set up a story wall to help people process the death of Michael Brown, the 18-year-old Black man who was shot by a White police officer in 2014, setting off the Black Lives Matter movement.

“There was a mother and daughter who came to see the memorial. And as they walked away, you could tell they were really feeling it. They were walking kind of separately. And I noticed the 13-year-old, and I said to her, ‘Can I give you a hug?’ and this child fell into my arms and wept like I was a member of her own family.”

Vega encouraged the two to create something that they could put on the memorial, and they collaborated and came up with a beautiful image: the words “hands up” with two hearts, the word “unfair” and a tear.

“And I think that’s the role it has,” Vega says. “Sometimes before we even have language, we have images, we have things that are visual. And so holding space with art materials gives people an opportunity to process, so that by end of it they do have words, and they have a greater understanding of it.”

But besides the inner work, the act of creating together can have an even greater impact socially, Vega says.

“The beauty of art and craftivism and this kind of resistance work is that oftentimes we are fighting against things—we’re constantly fighting against oppression, against racism, against sexism—but the art reminds us of what we’re fighting for,” she says. “And that’s connection, and beauty, and humanity, and the ability to create and dream and collaborate.”

Tracy L. Barnett wrote this article for YES! Magazine. Tracy is a Mexico-based independent writer focused on the environment, social justice, indigenous rights and travel. She is the founder of The Esperanza Project and author of the upcoming book, Looking for Esperanza: One Woman's Search for Hope in the Other America.