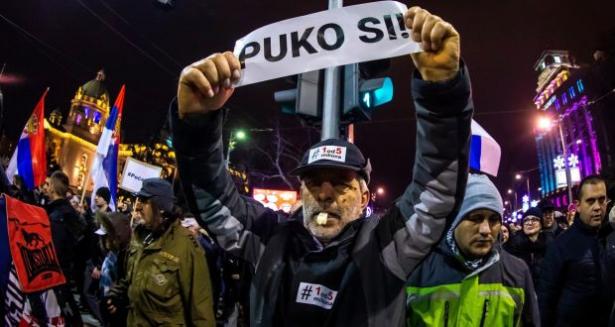 "You're through!" An anti-government protest in Belgrade, Serbia on Saturday, Photograph: Srdjan Suki/EPA

Andrés Manuel López Obrador was inaugurated December 1, in a ceremony unlike any other seen in Mexico. What’s next for the new president?

At least six authorities elected in the July 1 general elections were killed before taking office. Four of them belonged to Morena, one to the Democratic Revolution Party (PRD) and one to the Ecologist Green Party of Mexico (PVEM).

The Yellow Vest rebellion, now in its seventh week, is not “petering out,” despite the near-unanimous pronouncement of the mainstream media.

An explicit reference to Communism has been added—not present in the initial text: “The human being reaches their full dignity only in Socialism and Communism.“

Marking International Migrants Day, labor unions and human rights groups took to the streets to demand the Korean government revise the labor policy to a “Work Permit System” to protect the labor rights of foreign workers.

Ongoing protests and strikes in Iran have gained a new intensity. The oil-producing and industrial province of Khuzestan in southern Iran continues to be the most active site of labor, environmental and human rights struggles.

__________
The Battle Continues Against Neoliberalism and the Global Right

The year witnessed struggles across the world, most often led by trade unions, against neoliberalism and the related rise of the right-wing.