Democrats Announce First-Ever Hearings on Medicare for All 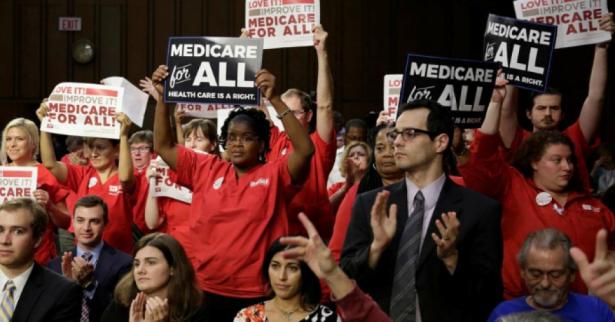 Audience members cheer during a Medicare for All event in Washington, D.C. on September 13, 2017, Yuri Gripas/Reuters

In an essential and historic step toward developing a humane, effective, and universal solution to America's for-profit healthcare crisis, Rep. Pramila Jayapal (D-Wash.) has reportedly won approval from House Speaker Nancy Pelosi (D-Calif.) to hold the first-ever hearings on Medicare for All in two of the most powerful committees in Congress.

"It's a huge step forward to have the Speaker's support," Jayapal said in an interview with the Washington Post on Thursday. "We have to push on the inside while continuing to build support for this on the outside."

According to the Post, Medicare for All legislation is set to receive hearings in the Rules and Budget committees, both of which are chaired by Medicare for All supporters—Reps. Jim McGovern (D-Mass.) and John Yarmuth (D-Ky.), respectively.

While dates for the hearings have not been officially announced, Jayapal said House Medicare for All supporters expect to release legislation in "the next couple of weeks."

"This will ensure that Medicare for All is part of the 2020 Democratic presidential platforms," said Jayapal, who will sponsor the House bill.

This is a huge step forward. We have to push on the inside while continuing to build support for this on the outside. Let’s make #MedicareforAll happen!

Highlighting reports that legislation to expand Social Security will also get a hearing in the Democratic House, Social Security Works president Nancy Altman applauded news of the coming Medicare for All hearings as "a giant step toward greater economic security."

The first-ever Medicare for All hearings will come as nurses and progressive advocacy groups continue to build support for single-payer at the grassroots level, launching pressure campaigns and nationwide Medicare for All "barnstorms" designed to build enthusiasm for the immensely popular, bold, and—contrary to the claims of its critics—cost-saving plan.

Meanwhile, insurance companies, Big Pharma lobbyists, and establishment Democrats committed to maintaining America's healthcare status quo are deploying their vast wealth and resources to "crush" Medicare for All before it even gets off the ground.

As Sanders Institute Fellow Michael Lighty argued in a piece for Common Dreams on Wednesday, "Only a mass social movement can overcome the huge resource and political advantages of the medical-industrial complex."

"It requires elected officials having to choose between voters and donors—and creating an overwhelming demand that forces them to accede to fundamental reform," Lighty concluded. "To be clear, that means guaranteed healthcare for all with no barriers to care."

This work is licensed under a Creative Commons Attribution-Share Alike 3.0 License
Because of people like you, another world is possible. There are many battles to be won, but we will battle them together—all of us. Common Dreams is not your normal news site. We don't survive on clicks. We don't want advertising dollars. We want the world to be a better place. But we can't do it alone. It doesn't work that way. We need you. If you can help today—because every gift of every size matters—please do.