A Coup in Guatemala is the Real Emergency

Rep. Norma Torres (D-Calif.) linked Guatemala's entrenched corruption to international migration, saying that the crises created by Guatemala's "mafioso" government are "why children leave their homes and risk their lives to come here." 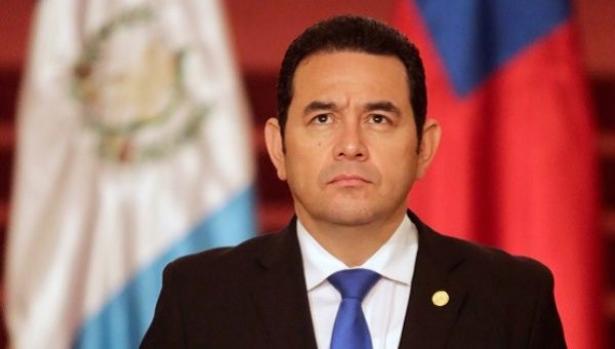 Guatemalan President Jimmy Morales looks up as he listens to national anthem at the Presidential Palace in Guatemala City, Guatemala January 11, 2017., Reuters

As the government shutdown drags on amid Trump's threats to declare a "national emergency" to build his border wall, a true emergency is unfolding in Guatemala, with serious implications for stability in Central America and beyond.

On Jan. 5, Guatemalan authorities detained a member of a U.N.-sponsored anti-corruption commission in the airport. They refused him entry into the country, despite an order by Guatemala's Constitutional Court not to interfere with the commission's work.

Two days later, Guatemalan President Jimmy Morales announced he was terminating the mandate of the International Commission Against Impunity, known as CICIG, which works with prosecutors in Guatemala's Public Ministry to investigate organized crime and corruption. The commission's investigators left the country the following day.

Morales himself is being investigated by CICIG for illicit campaign financing. His willingness to defy Guatemala's highest court in order to shut down that investigation has provoked a constitutional crisis, which many Guatemalan analysts and journalists are calling a "slow-motion coup," which could have dire implications for combating corruption — and a ripple effect beyond Guatemala’s borders.

The Trump administration has kept silent as Guatemala unraveled, a stance harshly criticized by Rep. Norma Torres (D-Calif.), co-chair of the House Central America Caucus. Torres linked Guatemala's entrenched corruption to international migration, saying that the crises created by Guatemala's "mafioso" government are "why children leave their homes and risk their lives to come here."

Trump's silence flies in the face of what had been, up to now, a strong bipartisan American support of CICIG. By turning its back on Guatemala's anti-impunity efforts, the Trump administration is undermining the best — and maybe the last — hope to dislodge mafia control over the Guatemalan state. Moreover, Guatemala's efforts to prosecute organized crime are watched closely in other Central American countries and even Mexico.

CICIG was created in 2006 at the request of the Guatemalan government and with the support of the United Nations. Its mandate is to help investigate and bring to justice cases of corruption and criminality, including drug trafficking, graft, money laundering, tax evasion, and other financial crimes. Many of CICIG’s early cases focused on Guatemala’s so-called “hidden powers,” shadowy criminal networks that gained influence during the decades of military dictatorship and counterinsurgency warfare in Guatemala. Its work is considered a model in Latin America for how to investigate and prosecute organized crime and corruption.

In 2015, CICIG's investigatory work, combined with massive anti-corruption protests in Guatemala, brought down the sitting president, former army general Otto Pérez Molina, and his vice president, Roxana Baldetti. Since then, the anti-impunity commission and Guatemalan prosecutors have brought charges against dozens of current and former government and military officials, as well as members of Guatemala's elite, allegedly linked to violent networks of graft. As anti-corruption probes have widened, so has the backlash from those sectors within Guatemala who want to protect themselves against current and future investigations.

Morales isn't the first Guatemalan president to try to get rid of CICIG. Shortly before he was deposed and arrested in 2015, Pérez Molina sought to end the commission's mandate, prompting Vice President Joe Biden to travel to Central America to make clear that the U.S. government saw a connection between governability, crime and migration.

In August 2017, Morales tried to expel the head of CICIG, Colombian prosecutor Iván Velásquez, after CICIG and the Public Ministry sought impeachment proceedings against the Guatemalan president as part of their anti-corruption probe. The president's maneuver was blocked by Guatemala’s Constitutional Court and condemned internationally, including by bipartisan U.S. Congressional leaders.

Morales later curried favor with Trump, promising, for example, to move Guatemala's embassy in Israel from Tel Aviv to Jerusalem in support of U.S. policy. And CICIG's opponents in Guatemala launched a vigorous campaign in Washington, hiring a pricey Beltway lobbying firm to chip away at the commission's congressional support. Within Trump's administration, the message changed from one of clear support for CICIG, under former Secretary of State Rex Tillerson, to a conspicuous silence under current Secretary of State Mike Pompeo and national security adviser John Bolton, whose anti-U.N. stances are well known.

Is the Trump administration actively undermining Guatemala's anti-corruption efforts, or is this unwitting neglect? Either way, it's a catastrophic moral and strategic mistake. President Jimmy Morales and his political and economic allies in Guatemala — those who also are under investigation — clearly feel emboldened to take down CICIG, even if it also means tearing down the public institutions built so laboriously after Guatemala's civil war ended in the 1990s.

In August 2018, Morales refused to renew CICIG's mandate, set to expire in September 2019. He then barred CICIG's head prosecutor, Iván Velásquez, from returning to Guatemala, accusing him of "affecting the governance, institutions, justice and peace of the country." In December, Morales announced his intention of expelling the remaining CICIG investigators, but Guatemala's Constitutional Court blocked the action, ordering Morales to let the commission continue its work until the end of its mandate. This is where events move beyond the struggle over CICIG itself to threaten Guatemala's political stability and the rule of law.

When CICIG investigator Yilen Osorio was detained on Jan 5 at the Guatemala City airport by immigration authorities, a 24-hour standoff ensued and the airport that was forced to close. Guatemalans wondered how far Morales would go in open defiance of a judicial order. Finally, Public Ministry agents arrived to escort Osorio out of the airport, arresting two immigration officials who were charged with illegal detention. It was a small victory for the rule of law in Guatemala.

On Jan. 7, Morales announced that he was unilaterally and immediately suspending CICIG's mandate, breaching the agreement signed between Guatemala and the U.N. Even worse, Morales' allies in the Guatemalan Congress may push to allow Morales to remove the three judges on the Constitutional Court who voted against him in the struggle over CICIG. This puts at risk not only Guatemala's anti-mafia campaign, but also the hard-fought integrity of its judicial system.

That day, 63 human rights and civil society organizations in Guatemala called upon U.N. Secretary General António Guterres to reaffirm support for CICIG. The State Department issued a statement on Tuesday that gave vague support for Guatemala's anti-corruption efforts but failed to mention CICIG.

Hours after Morales' latest announcement, U.S. Senator Patrick Leahy (D-Vt.), Vice Chair of the Senate Appropriations Committee, warned of congressional action to suspend aid to Guatemala as a consequence of the Guatemalan president's abuse of power. That is the correct action. U.S. policy must support those in Guatemala who are struggling to maintain the rule of law, and Congress must demand that Guatemala's anti-impunity commission be allowed to continue its work. Otherwise, we may soon see a new mafia-backed dictatorship in Guatemala. That will create problems that no border wall can solve.

Elizabeth Oglesby is associate professor of Latin American Studies at the University of Arizona. She is co-editor of “The Guatemala Reader” (2011) and “Guatemala: The Question of Genocide” (2018).

This piece has been updated.