Early Tuesday, actor, musician, and activist, Jussie Smollett was attacked at a Chicago Subway by two men who shouted racist and homophobic slurs and with “This is MAGA country” as they beat him, tied a noose around his neck, and poured bleach on him 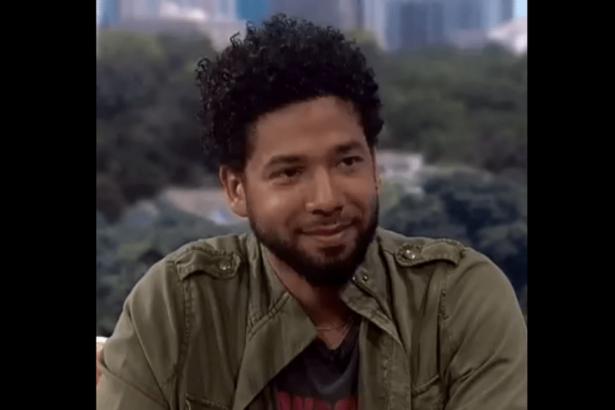 Jussie Smollett Survived an Attempted Lynching: This Is America - Rosa Clemente and JLove Calderón (Latino Rebels)
Demand that news outlets call the attacks on Jussie Smollett for what they are--racist and homophobic. - Color of Change

By Rosa Clemente and JLove Calderón

As you know by now, this Tuesday in the cold winter streets of Chicago, Jussie Smollett was viciously attacked by two masked men wearing MAGA hats. If there is any remaining doubt that Donald Trump’s rhetoric has reawakened and ignited a racist White America, that doubt must now be laid to rest.

This was an attack steeped in homophobia and racism.

This isn’t just a hate crime, this is an attempted lynching.

This is an act of terror.

Jussie’s attack causes trauma to him, his family, his community and the LGBTQIA community. It is a warning from white supremacists and opens the door to more fascism in this country. Fascism is a political ideology about us and them—about racial and sexual identity, because let’s be clear, Jussie was attacked because he is Black and because he is gay. In the book How Fascism Works: The Politics of Us and Them, author Jason Stanely states, “Sexual anxiety is also typical of racist politics as the patriarchal hierarchy is threatened by growing gender and sexual equity.”

This is where Trump and his followers have pushed this country to. White people terrorizing Black and Brown people has become normalized, again. White supremacy, patriarchy and homophobia destroys lives and kills people.

Let’s go back in history to truly understand the significance of the attempted lynching and chemical warfare (for anyone who doesn’t know, the attackers also threw bleach on his body).

Lynching was used as a terror tactic designed to dehumanize and strip Black people of their dignity and their lives.

The National Memorial for Peace and Justice says that “More than 4,400 African American men, women, and children were hanged, burned alive, shot, drowned, and beaten to death by white mobs between 1877 and 1950. Millions more fled the South as refugees from racial terrorism, profoundly impacting the entire nation.”

Ida B. Wells-Barnett was an anti-lynching activist and the first African-American woman to own her own newspaper. Beginning in 1895 until 1930, she documented lynchings in a book called The Red Record.

“Some were witnessed by big crowds who brought children and picnic baskets, as if at a public entertainment,” a Guardian storyabout Wells’ work said.

“Wells visited places where people had been hanged, shot, beaten, burned alive, drowned or mutilated,” the story later added. “She examined photos of victims hanging from trees as mobs looked on, pored over local newspaper accounts, took sworn statements from eyewitnesses and, on occasion, even hired private investigators.”

One hundred years later, there is a new name to add to the Red Record. We are blessed Jussie lived to tell his story.

ALL of us need to recognize that this moment in history requires each and every one of us to pick a side. You are either on the side of white supremacy and patriarchy, or the side of freedom. It’s not enough to just critique or make jokes about Trump’s rhetoric. It’s not enough. Anyone who stands with Donald Trump and his administration is complicit.

As organizers, we understand the struggle for justice is long. We are committed to that organizing for the long haul. Part of that commitment is about supporting Black and Brown and gender non-conforming folx.

We send Jussie and his family and friends love and support, and we hope that this moment will lead us toward a real political movement of resistance.

[Rosa Clemente is an organizer and independent journalist and 2008 Green Party Vice Presidential candidate and Creator of Puerto Rico on the Map.

JLove Calderón is an award-winning creative, activist, coach and trainer working on the frontlines of race, class and gender for two decades.]

Demand that news outlets call the attacks on Jussie Smollett for what they are--racist and homophobic. 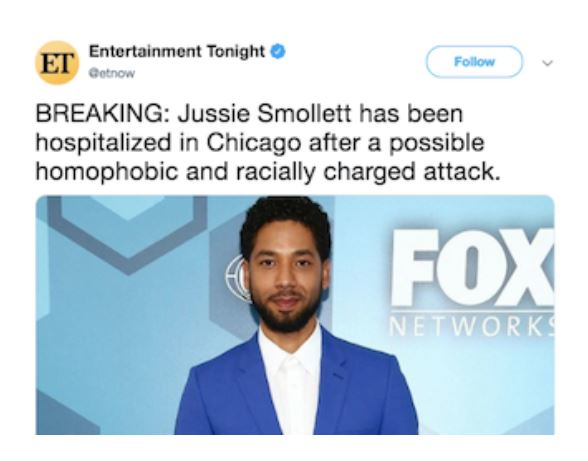 Early Tuesday morning, beloved actor, musician, and activist, Jussie Smollett was attacked at a Chicago Subway by two men who shouted racist and homophobic slurs along with “This is MAGA country” as they viciously beat him, tied a noose around his neck, and poured bleach over his body.1 As we send prayers and healing toward Jussie and his family, it is clear that for those living at the intersection of Black and LGBTQ identities, discrimination and violence is compounded.  That is why we're demanding that mainstream media stop the euphemism of this brutal attack. News outlets like Entertainment Tonight and NBC News have refused to be clear and integral in their reporting; instead choosing to soften these vicious acts as “racial” or “racially charged”, instead of calling them for what they are: racist and homophobic.2

Since Donald Trump’s ascent to power, we’ve seen a change in the way racist and sexist violence has been reported by the media. Rather than holding the line as arbiters of truth, some of our most trusted publications have allowed Trump’s normalization of racist and sexist ideals to run the show. Representative Steve King, who infamously asked why the term “white supremacist” was offensive, has enjoyed the benefit of the doubt from the media--often being referred to as a “racialist” even as his government website links to overtly white nationalist websites.3 And who can forget the New York Times characterizing Donald Trump’s calling African nations “sh*thole countries” as “racially tinged?”4 Or ABC News referring to lynching threats against Senator Al Green as “racially charged?”5 The truth is that phrases like “racially-charged” and “racially-tinged” serve a dual function- they allow news outlets to avoid offending their conservative readership while giving people and institutions who propagate systemic race-based discrimination a way to avoid the claim of racism.

In the wake of such a horrific homophobic and racist act, the media must be accountable for their power to dictate the language we use and the ideas that we discuss. But instead, they’ve relished in the sensationalism and ratings bonanzas that the normalization of misogyny and racism have brought them. It’s been reported that during the 2016 election, Donald Trump received an estimated $2 billion of free media.6 And in turn, cable news networks profited, with primetime viewership on CNN, Fox News, and MSNBC up 50%.7 With the lives of so many at stake, we cannot allow news to play the middle.

As Jussie Smollett lies in a hospital bed recovering from an attack committed against him because of his race and sexual orientation, news media must be clear and integral in their reporting of racist attacks. They owe it not only to Jussie--but the countless others who fear for their lives in the wake of emboldened white supremacists. They must be clear, direct, and fair in their reporting and stop normalizing a hate-fuelled movement that seeks to harm us.

Join with us as we demand that news outlets stop using phrases like  “racially-charged” for explicitly racist acts.

Until justice is real,

NOTE: From pressuring mainstream media to stop using the term “alt-right” to campaigning against Associated Press’s use of the term “chain migration”, Color Of Change has led the fight against biased reporting. Later this year, we will be publishing a media reference guide that will provide news outlets with guidelines and preferred language for equitable and fair coverage.  We ask you to join with us in this crucial fight by texting MEDIA to 225568.

Color Of Change is building a movement to elevate the voices of Black folks and our allies, and win real social and political change. Help keep our movement strong.