The US Is Orchestrating a Coup in Venezuela

As Venezuela’s second president, Simon Bolivar, noted in the 19th century, the US government continues to “plague Latin America with misery in the name of liberty.” 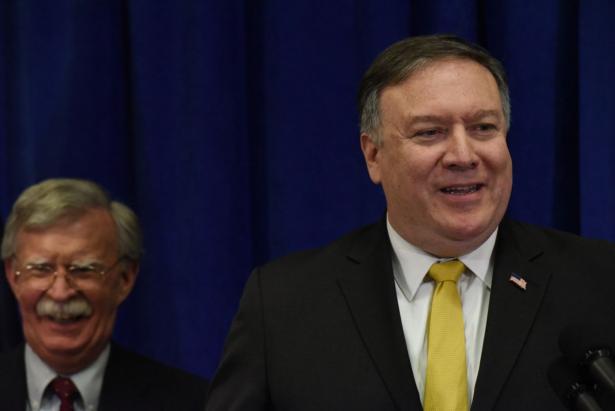 From engineering coups in Chile and Guatemala, to choreographing a troop landing at the Bay of Pigs intended to establish an exile government in Cuba, to training Latin American strongmen at the School of the Americas in torture techniques to control their people, the United States has meddled, interfered, intervened and undermined the democracies it claims to protect.

In 2002, the George W. Bush administration, through the CIA, aided and abetted an attempted coup, according to attorney Eva Golinger, an award-winning author and journalist. Golinger, a close confidante of former Venezuelan President Hugo Chávez, obtained evidence of US intervention from multiple Freedom of Information Act requests, which she discusses in her new book, Confidante of ‘Tyrants’: The Inside Story of the American Woman Trusted By the US’s Biggest Enemies.

US Aided and Abetted 2002 Coup Attempt

Golinger came to Chávez’s attention after her investigation revealed proof of US involvement in the 2002 attempted coup. Since Chávez was elected president of Venezuela in 1998, the United States tried overtly and covertly to overthrow his “Bolivarian Revolution” by furnishing opposition groups working for regime change with millions of dollars, Golinger writes. Chávez used Venezuela’s vast oil wealth to eradicate illiteracy and poverty, and to provide education and universal health care.

After Chávez’s death in 2013, Nicolás Maduro was elected president after promising to carry on the Bolivarian Revolution. But the punishing sanctions President Obama imposed in 2015, combined with corruption, mismanagement and autocratic leadership, caused economic hardship. Falling oil prices in 2016 led to hyperinflation two years later, and Venezuela’s economy collapsed.

Nevertheless, Maduro was re-elected in 2018. The opposition’s boycott of the election and the US government’s support of that boycott resulted in Maduro’s victory over Henri Falcón.

Elliott Abrams is a disturbing, but not surprising, choice to serve as US special envoy to Venezuela. Abrams was convicted of lying to Congress about the Iran-Contra scandal and later pardoned by George H.W. Bush. The new envoy supported General Efraín Ríos Montt, the Guatemalan dictator who directed the torture and mass murder of Indigenous people in the 1980s, and was later convicted of genocide. Moreover, Abrams was linked to the 2002 attempted US coup in Venezuela.

The Trump administration is now pursuing regime change in Venezuela in plain sight.

“The naming of notorious ‘dirty war’ expert Elliott Abrams to oversee the Venezuela operation, the public threats against Venezuela of ‘consequences’ should they defy the US made by Trump’s hawkish John Bolton, and Trump’s own multiple statements that a military option is ‘on the table’ for Venezuela, clearly show that the table is set,” Golinger told Truthout.

The “US is not just ‘behind’ this coup,” Ben Norton wrote in a series of tweets. “The US is openly leading the coup.”

Indeed, The Wall Street Journal reported that on January 22, Pence called Juan Guaidó and “pledged” US support “if he seized the reins of government from Nicolás Maduro.” Guaidó was a little-known player whom the United States had long cultivated to undermine the Bolivarian Revolution. Guaidó swore himself in as “interim president” of Venezuela the following day.

“That late-night call set in motion a plan that had been developed in secret over the preceding several weeks, accompanied by talks between U.S. officials, allies, lawmakers, and key Venezuelan opposition figures, including Mr. Guaidó himself,” according to the Wall Street Journal. “Almost instantly, just as Mr. Pence had promised, President Trump issued a statement recognizing Mr. Guaidó as the country’s rightful leader.”

“Opposition leaders have already met in the White House with Pence, and Trump himself telephoned Guaidó to express US support for his de facto regime. If this is what they are doing overtly, we can only imagine the depth of their covert ops in Venezuela,” Golinger told Truthout.

In fall of 2017, Trump broached the subject of invading Venezuela with top White House officials, including former Secretary of State Rex Tillerson and then National Security Ddviser HR McMaster. Although they tried to dissuade him, Trump was “preoccupied with the idea of an invasion.” He raised the issue with the president of Colombia at a private dinner during a UN General Assembly meeting. McMaster finally talked Trump out of it.

But as recently as a few weeks ago, Trump reportedly asked Sen. Lindsey Graham (R-South Carolina), “What do you think about using military force?”

Bolton held a yellow legal pad with the words “5,000 troops to Colombia” prominently written on it at a January 28 press briefing. Although Bolton didn’t mention sending troops to Colombia, which shares a border with Venezuela, his well-placed prop serves as an ominous warning.

On January 28, the Trump administration imposed sanctions against Venezuela that amount to an oil embargo. They forbid Venezuela’s state-owned oil company from doing business with most US companies (except Chevron and Halliburton).

These penalties are projected to deprive Venezuela of $7 billion in assets, resulting in $11 billion in export losses during the next year. That’s on top of the $6 billion that Trump’s August 2017 financial sanctions cost Venezuela in one year.

The new sanctions against Venezuela “could turbocharge what is already the world’s worst inflation, worsening fuel shortages and compromise the state’s ability to buy and distribute food,” the New York Times reported.

“[A] problematic idea driving current US policy is the belief that financial sanctions can hurt the Venezuelan government without causing serious harm to ordinary Venezuelans,” Francisco Rodríguez, a Venezuelan economist, wrote in Foreign Policy. “That’s impossible when 95 percent of Venezuela’s export revenue comes from oil sold by the state-owned oil company. Cutting off the government’s access to dollars will leave the economy without the hard currency needed to pay for imports of food and medicine.”

As a result, Rodríguez, added, “Starving the Venezuelan economy of its foreign currency earnings risks turning the country’s current humanitarian crisis into a full-blown humanitarian catastrophe.”

The United States used the same flawed strategy in 1960 when the Eisenhower administration imposed an embargo on Cuba. A State Department memo had proposed “a line of action that makes the greatest inroads in denying money and supplies to Cuba, to decrease monetary and real wages, to bring about hunger, desperation and the overthrow of the [Fidel Castro] government.” Although the embargo continues to hurt the Cuban people, it failed in its stated goal.

In addition to the oil sanctions, the US State Department turned over control of Venezuela’s property and bank accounts in the United States to Guaidó, in what The New York Times called “one of Washington’s most overt attempts in decades to carry out regime change in Latin America.”

Regime Change and Sanctions Are Illegal and Unwanted

Forcible regime change in Venezuela is illegal under international law.

“The shocking aggression and illegal interference against a sovereign nation by the Trump administration is a blatant violation of the charters of the United Nations and Organization of American States, which recognize the principles of national sovereignty, peaceful settlement of disputes, and a prohibition on threatening or using force against the territory of another state,” the National Lawyers Guild said in a statement.

Moreover, the organization states, “directly fomenting a coup in a sovereign nation is not only illegal and outright shunned by the international community, it fundamentally undermines any pretextual concern about interference by other nations in U.S. elections.”

Venezuela has the world’s largest oil reserves, and the United States is its biggest customer.

Indeed, the United Nations Charter requires that countries settle their disputes peacefully and forbids the use or threat of force against the territorial integrity or political independence of another country. Military force is only permissible in self-defense or with the assent of the Security Council. Further, the Charter of the Organization of American States (OAS) says no country can intervene, for any reason, in the internal or external affairs of another country.

US imposition of economic sanctions against Venezuela is also illegal. The OAS Charter proscribes the use of coercive economic or political measures to force the sovereign will of another country and obtain any advantages from it.

“Coercion, whether military or economic, must never be used to seek a change in government in a sovereign state,” said Idriss Jazairy, a UN special rapporteur concerned with the negative impact of sanctions. “The use of sanctions by outside powers to overthrow an elected government is in violation of all norms of international law.” Jazairy also noted that, “Precipitating an economic and humanitarian crisis in Venezuela is not a foundation for the peaceful settlement of disputes.”

Moreover, in order to impose sanctions under US law, the president must declare a national emergency and state that Venezuela constitutes an “unusual and extraordinary threat” to the national security of the United States. That claim is patently false.

De Zayas is a signatory to an open letter released last week, signed by 70 experts and academics who condemned the US-backed coup attempt against the Maduro government.

Although ostensibly aimed at helping the Venezuelan people, Team Trump’s sanctions and threats of military invasion are overwhelmingly unpopular in Venezuela. Eighty-six percent of Venezuelans oppose US military intervention and 81 percent are against sanctions.

Within two days of his self-inauguration as “interim president,” Guaidó began a process to restructure and privatize Venezuela’s oil industry for the benefit of multinational corporations.

Drawing a parallel with George W. Bush’s Iraq war, Tulsi Gabbard (D-Hawaii) tweeted, “It’s about the oil … again.” Indeed, Halliburton, exempted from the new sanctions against Venezuela, is once again benefitting from regime change, like it did in Iraq.

Bolton didn’t pull any punches when he stated at a press conference that, “We’re in conversation with major American companies now. … It would make a difference if we could have American companies produce the oil in Venezuela. We both have a lot of stake here.”

The Trump administration appears intent on privatizing Venezuela’s oil in order to maximize the profits of US oil companies at the expense of the Venezuelan people and the rule of law.

...which is why Truthout urgently need everyone reading this to take a moment to help us continue our work.

Unlike most news sites, TRuthout doesn't run ads, have a paywall or sell your info. We rely on your support.

Please, help Truthout keep fighting for a better future by making a tax-deductible donation right now. It takes seconds (we don’t even need your address) and every dollar helps.