labor Anchor Workers Are Organizing to Become One of the First Unionized Craft Breweries in the U.S.

After taking their union drive public on Thursday, workers from Anchor Brewing Company, a San Francisco institution that was founded in 1896 and stands as one of the country’s oldest craft breweries, rallied in the Mission District. 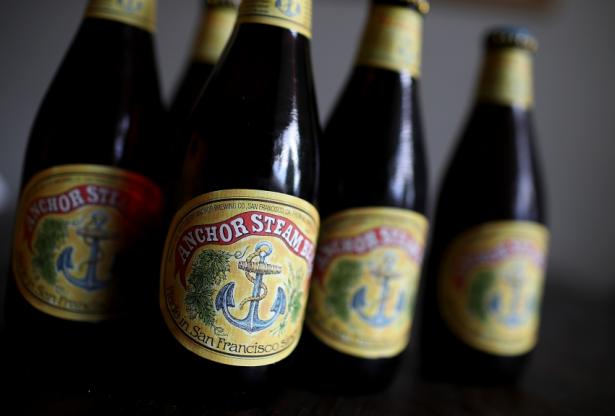 Beer is better when it's union made., (Photo by Justin Sullivan/Getty Images)

After taking their union drive public on Thursday, workers from Anchor Brewing Company, a San Francisco institution that was founded in 1896 and stands as one of the country’s oldest craft breweries, rallied in the Mission District. The workers estimate 75 people showed up to support their union, organized with the International Longshoremen and Warehouse Union (ILWU). Should the workers’ union drive succeed, theirs would be among the first unionized craft breweries in the United States.

“We were the first craft brewery,” said Garrett Kelly, a full-time fermentation worker at Anchor who has been with the company for three years. He stressed that his love for being a part of Anchor is part of the motivation for unionizing. “We've led the way for decades, so it makes sense for us to lead the way in this new chapter.”

After gathering in the Mission for a few speeches, the crowd dispersed into small groups to coat the neighborhood’s bars, restaurants and liquor stores with signs in support of the Anchor union.

“My group went to eight places and we didn't get a single negative reaction,” said Kelly. “People were giving us free beer, free food; they were just really excited to support us.”

“We drew up a turf map of every place that sells Anchor, then we went out and talked to people at every one,” said Brace Belden, a part-time Anchor worker and member of the union’s organizing committee. “The first bar we went to had all these old Anchor Steam signs and I thought ‘Man, this guy might be weird,’ but his response was to say what we were doing was amazing and to ask for eight of our signs.”

Belden, like many of his coworkers, is kept at 29-hour workweeks—Anchor would be legally required to provide healthcare to anyone working 30 hours or more. He makes $16.50 an hour, which he points out is far below what’s considered a living wage in San Francisco. “My rent is about to go up to $1,100,” he added. “I make shit [money].” He described his work as fun but “backbreaking,” adding that hearing loss is a particular concern among his coworkers.

These concerns are what led the approximately 70-person bargaining unit to unionize.

“Working at Anchor brewing company used to be one of the best jobs in San Francisco; you could make a career and raise a family with what used to be a full-time factory job with great benefits” said Kelly. “But that's no longer the case. There's been a steady and systematic rollback of our wages, our benefits and our quality of life.”

Jon Ezell, a full-time bottle-shop worker who has been with Anchor for almost two years, told me he sometimes spends two hours commuting home from the company’s Potrero Hill facility, a reflection of the Bay Area’s ballooning housing crisis, which is itself a product of the area’s immense class divide. “That’s the crushing fact of life in the Bay Area,” Ezell said. “And it’s time away from my kids… We have three kids. If I wanted to live in the city, the cheapest two-bedroom apartment near my work is over $4,000 a month.”

Five members of the union’s organizing committee delivered a letter announcing their unionization to management at the facility on Thursday. They describe the immediate response as “extremely negative and petty.” After being shunted into a small conference room and told the CEO would not have time to speak with them, the workers said they were asked if they were still on the clock. “Who clocks out to go to a meeting?” Kelly recounted. Should Anchor refuse to voluntarily recognize the union within 48 hours, workers say they will file for a National Labor Relations Board vote “immediately.” They are urging the company to remain neutral throughout that process.

The union drive began a year ago, not long after beer conglomerate Sapporo’s 2017 acquisition of Anchor. Though it’s unclear how the acquisition will affect working conditions at the brewery—and it’s worth noting that one Canadian subsidiary of the company is unionized and went on strike as recently as 2017—workers describe recent changes, such as the reduction of a 45-minute paid lunch, as concerning. “If you work at a craft brewery, you get a shift beer,” said Belden. “But they took that away recently too.”

While craft breweries are by definition small companies, the country’s 7,000 craft breweries represent a growing proportion of the U.S. beer market: 23 percent in 2017, according to the Brewers Association. As was noted in an SF Weekly story on the unionization drive, that amounts to $26 billion in sales. But despite generating such profits, craft brewery workers’ wages declined by 25 percent from 2006 to 2016, according to the Bureau of Labor Statistics. Workers at Anchor say the starting wage is lower now than it was 5 years ago. This squeeze is in stark contrast to larger breweries such as Anheuser-Busch, where thousands of workers are members of the International Brotherhood of Teamsters and receive higher wages than their craft counterparts.

While so-called bread-and-butter issues are central to the union drive, Belden emphasized that the campaign is also about control, and having a say in one’s own life.

“I rent a place, and I can get kicked out any time. I'm an at-will employee—I have no control in that area of my life. I think once [my coworkers] realized that they could have an iota of control, people started taking themselves more seriously. People are valuing their work and realizing that, ‘Hey, all our managers moved here from Canada and Japan; we are the company.’”

The union with which Anchor workers have chosen to organize, the ILWU, remains a bright spot in a U.S. labor movement that has found itself on the back foot for decades, besieged on all sides by anti-union politicians, moneyed organizations that are hostile to labor and unfavorable court rulings. The partnership, facilitated through the San Francisco chapter of the Democratic Socialists of America, of which several organizers of the Anchor union are members, is a promising sign that, where other attempts have failed, these workers may succeed. And that’s why they’re hoping not only to improve their own working conditions, but to inspire others in the craft beer industry to unionize.

“There is space for fighting unions right now,” said Belden. “In the past year, since Trump's election, and since Janus, we’ve seen the laborers and workers and the toilers of America—especially the teachers and nurses—get aggressive. But lots of people who work in these blue-collar jobs, for some reason they think that because they aren’t carpenters or something, they can't have a union…People like it when Alexandria Ocasio-Cortez fights, people like when Bernie Sanders fights, but they can't think of themselves fighting, or their unions fighting. We’re hoping to change that, we hope this can contribute to a fighting unionism.”