This is an illegal, anti-democratic power grab rooted in racism. The only emergency at the border is the one created by Trump and the Republicans enabling his temper tantrum. 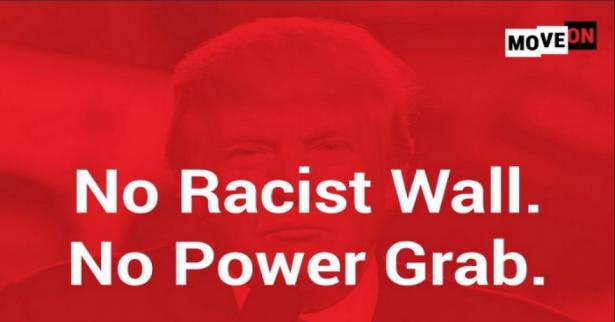 President Donald Trump has officially declared a national emergency to construct his "racist" border wall, and progressive groups have a plan to fight back.

After Trump on Friday issued the emergency declaration in a rambling and lie-filled speech on the White House lawn, grassroots progressive organizations announced nationwide protests and a massive pressure campaign urging Congress to block the president's "anti-democratic power grab."

"This is a full-fledged attack on our democracy," Indivisible declared in an email to supporters detailing its action plan. "The only emergency at the border is the one created by Trump and the Republicans enabling his temper tantrum."

In a strategy call on Friday, progressive groups announced "No Racist Wall, No Power Grab" protests throughout the U.S. on Monday, Feb. 18 at noon local time.

Visit CrisisResponse.us to receive updates on the demonstrations and find an event in your area.

Indivisible also laid out a three-step plan to defeat Trump's "desperate attempt" to sidestep the legislative process to fund his wall:

"This is the move of an authoritarian, reckless human filled with hate and a stubborn need to fulfill his campaign promise," Indivisible said of the president's emergency declaration. "Trump will not get away with it and our [members of Congress] must uphold the mandate that they accepted the day they were elected into office to fight back and protect our democracy."

Sign up to march with us, @MoveOn, and more to protest this abuse of power rooted in hate here: https://t.co/qp3paowVhu and text MOBILIZE to 977-79 for updates.

Read our resource for more on what this means and what Congress can do: https://t.co/smrrDhznTz pic.twitter.com/UMtvMICz5c

The nationwide demonstrations on Monday will be led by a large coalition of diverse advocacy groups representing millions of Americans, including Win Without War, CREDO Action, MoveOn.org, Public Citizen, United We Dream, and others.

"Our most pressing national emergency is that a racist autocrat occupies the White House," CREDO Action co-director Heidi Hess said in a statement. "The media and politicians should be perfectly clear about what this is: An unconstitutional power grab that threatens our democracy and escalates Trump's attacks on immigrants, communities of color, Muslims and black and brown people."

"There is already a mass mobilization happening against Trump's wall," added America's Voice. "Fifty thousand signed MoveOn petitions against the national emergency overnight, ten thousand made calls to Congress, thousands of people expected to hit the streets on Monday. This is a moment."