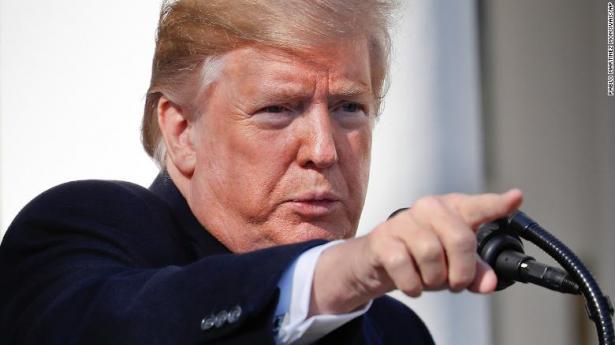 House Democrats are vowing an aggressive response to President Trump's emergency declaration at the southern border, mulling ways to block his go-it-alone approach with legislation, legal action, or both.

Yet party leaders are in no immediate rush to show their hand, instead hoping to keep the focus on growing GOP divisions while pressuring more Republicans to oppose the president's unilateral power play.

Heading into the weeklong Presidents Day recess, the office of Speaker Nancy Pelosi (D-Calif.) is distributing a spreadsheet to members logging a host of wide-ranging local projects potentially threatened by Trump’s effort to shift funds from military construction coffers to the border wall.

The list — nearly 400 projects long — features a number of ventures in GOP districts. It includes maintenance facilities for F-35 stealth fighters at Eielson Air Force Base outside Fairbanks, Alaska; the operation of a middle school at Fort Campbell, Ky.; and funds to replace a training maze at Fort Bragg, N.C.

“We have to smoke out as many Republicans as possible by making the case that projects in their backyard are in jeopardy and will likely be raided to help pay for Trump’s ineffective and politically motivated wall,” said a senior Democratic aide.

“Congress has granted the executive branch certain spending authorities. I strongly object to any president acting outside of those explicit authorities to spend money that Congress has not appropriated for specific initiatives,” said Rep. Greg Walden, the House GOP’s former top campaigns chief and the only Republican in the Oregon delegation.

“We recognize the president has the authority to declare a national emergency but believe this sets a bad precedent and lets Congress off the hook from doing its job,” Reed said. “We encourage the president to use other means to move around unused money to build off of the down payment on border security Congress is delivering with this funding bill.”

Across the Capitol, GOP criticism of Trump’s executive move was even more scathing.

Sen. Thom Tillis (R-N.C.), a member of the Judiciary and Armed Services committees, warned that Trump was setting a horrible precedent that the next Democratic president could use to ram through “left-wing” policies.

Sen. Booker (D-N.J.) is running for president, while Sen. Sanders (I-Vt.) is expected by many to enter the race.

“It doesn’t matter who the President is or what party they belong to: I strongly believe in the separation of powers and curbing the kind of executive overreach that Congress has allowed to fester for the better part of the last century, including during the Obama Administration,” Tillis said in a statement.

Those GOP concerns aren’t necessarily unfounded. On Friday, Rep. Ilhan Omar (D-Minn.), a progressive freshman rabble-rouser, tweeted that the next president “should declare a #NationalEmergency on day 1 to address the existential threat to all life on the planet posed by Climate Change.”

“I'm not advocating for any president doing an end-run around Congress,” she said. “I'm just saying that the Republicans should have some dismay about the door that they are opening.”

The bipartisan pushback arrived within hours after Trump, speaking from the White House Rose Garden, declared a national emergency at the U.S.-Mexico border. The president argued that waves of migrants streaming north from Central America pose a direct threat to national security, leaving him no choice but to sidestep Congress and direct $8 billion from other projects to build the wall he’d promised during his 2016 campaign.

A day earlier, Congress had passed a sweeping federal spending bill, providing funds to roughly a quarter of the government — including the Department of Homeland Security (DHS) — and preventing another partial shutdown.

Trump agreed to sign the package, but only reluctantly, since Democrats had successfully blocked the $5.7 billion in border wall funds he’d requested within it. The emergency declaration, endorsed by Senate Majority Leader Mitch McConnell (R-Ky.), was the president’s way to claim victory in defeat. With it, Trump is asserting the power to fund the wall by transferring funds from other projects, under DHS and beyond, including some Congress had approved for the Defense Department.

Democrats, however, won’t sit idle long in launching their formal response. Reps. Joaquin Castro (D-Texas), the chairman of the Congressional Hispanic Caucus, and Alexandria Ocasio-Cortez (D-N.Y.) are already drafting a resolution to block the declaration from taking effect. That proposal could arrive as early as next week, according to a second Democratic aide.

“We've got people flooding in to support this, which is great,” the aide said.

Among the early supporters is Rep. Steve Cohen (D-Tenn.), chairman of the Judiciary Committee’s subpanel on the Constitution. It’s unclear, however, if Democrats will rally around the Castro resolution or another proposal, or if they’ll move it through committees or bring it straight to the floor.

Passage by the House would create an enormous headache for McConnell. Although the Kentucky Republican said he supports Trump’s declaration, the National Emergencies Act requires that such a resolution is deemed privileged, guaranteeing a vote on the Senate floor, and highlighting GOP divisions with Trump.

Democrats are also eyeing a legal challenge to Trump’s declaration, with House Majority Leader Steny Hoyer (D-Md.) predicting this week that Democrats “would test it in the courts.”

Democrats could file such a suit themselves, or piggyback onto other legal challenges sure to come from states, landowners and other stakeholders affected by new wall construction. California, for instance, announced Friday that it will file such a suit. And others are eager to join.

“This affects everyone in Congress, affects governors,” New Mexico Gov. Michelle Lujan Grisham (D) said Thursday in an interview with MSNBC. “And we will join whatever legal action and related efforts to make sure that we keep the executive branch in check.”