When it comes to normal longevity – living to 85 – your lifestyle is more important than your genetic makeup; but if you don’t have that genetic makeup, then you’re not going to make it to 100. 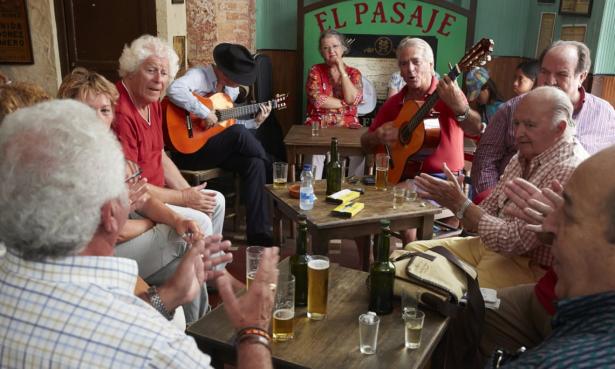 According to a study, people in Spain will have an average lifespan of 85.8 years by 2040. ,Godong/UIG/Rex/Shutterstock

Spain is on course to become home to the world’s longest-lived people, with researchers crediting diet and lifestyle

The Mercado de Maravillas lives up to its name. Should you ever find yourself in Madrid and desperate to buy half a kilo of pigs’ ears, a pair of fluffy slippers, a whole beef heart, a poncho, a jar of Peruvian chilli sauce and a bottle of good, strong bleach all under one roof, the stallholders of the Market of Wonders will be happy to oblige.

Its most life-enhancing marvels, however, may lie in the piles of neatly stacked fruit and vegetables, the bags of nuts and in the treasuries of fish reclining, dead-eyed but odourless, on beds of ice.

Markets such as the Mercado de Maravillas – which have long flourished across Spain – could be one of the main reasons why Spaniards are on course to overtake the Japanese to become the longest-lived people in the world.

According to a study published this week by the Institute for Health Metrics and Evaluation in Seattle, people in Spain will have an average lifespan of 85.8 years by 2040, while those in Japan will lag ever so slightly behind on 85.7 years.

Fernando de la Fuente, who has run a fruit and veg stall in the Mercado de Maravillas for 47 of his 61 years, was not at all surprised that researchers think Spain’s famous Mediterranean diet plays a major role in longevity.

The oldest people he knows – and they tend, overwhelmingly, to be women – know how to eat.

“It’s fruit and vegetables – which we can grow all year round – it’s fish, it’s meat; it’s a bit of everything,” he said on Friday morning.

Could he conceive of a diet without a sizeable daily ration of fruit and vegetables? He looked confused and then aghast – and probably not just for professional reasons.

“That wouldn’t be possible,” he said. “A Spanish diet without fruit and vegetables is just unthinkable.”

Antonio Abellán of the Research Group on Ageing at Spain’s National Research Council (CSIC) said the study’s findings were consistent with a recognised trend. Over recent years, life expectancy in Spain has been approaching that of top-tier countries such as Japan, Switzerland, Sweden and France.

“The truth is we don’t know all the reasons why,” he said. “The generations now reaching old age in Spain are doing a bit better than other generations did in other countries. We can say that the new generations of old people coming through now are a bit better and so will last a bit longer.”

Abellán said that while the Mediterranean diet obviously played its part, social and familial relationships were also key.

“Like other Mediterranean countries, Spain really values that family richness: the bonds of family; the closeness of family. It’s not the only thing – nor the most important thing – but I think it goes some way to explaining the differences between Spain and other countries. It’s a bonus. If you live better, you end up living longer.”

For Consuelo Borrás, a lecturer in physiology at the University of Valencia, lifestyle remains the most important factor in life expectancy.

Even if the modern world has begun to take its toll on the Mediterranean diet, “it’s still fairly well lodged in the Spanish mentality and we know it’s something that’s important”.

But, she added, a healthy diet can only take you so far.

“Genetic makeup is very important when we’re talking about extreme longevity – people who are going to live for 100 years,” said Borrás.

“No matter how well you look after yourself throughout your life, if you don’t have that genetic makeup, then you’re not going to make it to 100. But when it comes to normal longevity – living to 85 – your lifestyle is more important than your genetic makeup.”

Dr Jeroen Spijker, a research fellow at the Centre for Demographic Studies at the Autonomous University of Barcelona, said that Spain’s universal free healthcare system was helping people to live longer than in other countries.

But he said the country’s food culture – not to mention its abundance of produce – was also a factor.

Spijker warned that the demographic shift would also require careful thought. Next week, the Spanish parliament will debate a government bill that would make euthanasia available in both public and private healthcare for those with incurable diseases and irreversible disabilities that cause unbearable suffering.

“We all want to live well in our old age, but we don’t want to enter what gerontologists call the ‘fourth age’, which is really defined as being frail,” said Spijker.

“The onset of [being] frail used to often begin in your 70s, but it’s becoming more common now in people in their 80s or 90s.”

He also noted that the longevity projections might need to be altered as new cohorts reach old age.

“People are getting to 100 these days and they’re from a generation that never smoked – especially the women,” he said. “I’m still a bit wary as to what effect people born in the 1950s and 1960s will have on the trend over the next 20 to 30 years as they’re the first wave of massive female smokers.”

Back at the Mercado de Maravillas, a woman who looked to be in her late 50s was wandering the busy aisles. María, who didn’t want to give her surname, turned out to be 75. “Yes: seven five.” Her secret? “It’s olive oil, vegetables, fruit, fish, not too much meat, the odd beer and a little bit of wine,” she said. “Oh, and you need to enjoy your life, your friends and, above all, your family.”