The Wet’suwet’en struggle in British Columbia is the latest Indigenous resistance that builds on hundreds of years of organizing against colonial Canada. 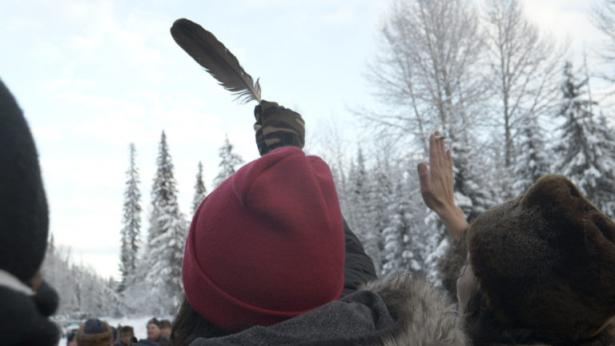 Colonialism in Canada is alive and present. It wields enormous ongoing violence against us Indigenous people through disappearing and murdering our women, two-spirit, and trans people; through lack of clean drinking water; dire housing conditions and shortages; and the highest rates of poverty, and incarceration, of any group of people within Canada. The underlying motivation that propels all of this violence is the state’s age-old war for Indigenous land.

Wet’suwet’en is an Indigenous nation in northern British Columbia, the westernmost province of Canada. Like the majority of Indigenous nations in BC, Wet’suwet’en never signed a treaty with the government. Their land is unceded. In fact, aside from the 14 Douglas Treaties on Vancouver Island, a small portion of land in northeastern BC caught within Treaty 8, and a few “modern” treaties, all of the land in BC is unceded. This is the case because of a fairly complicated history of the province “going rogue” and defying the terms of the Royal Proclamation of 1763.

Yet, throughout Canada, even nations with treaties tell stories and histories of being manipulated through treaty negotiations; every treaty was negotiated under duress, with coercion rather than consent as the rule. The spirit of the treaties as they were understood by Indigenous nations has never been followed by the Canadian state. All land in Canada is not unceded, but all land is certainly contested.

In British Columbia, it was not until the early 1990s that the province began the BC Treaty Process, a modern treaty process that has put Indigenous nations into millions of dollars of debt, and that a sizable number of nations have dropped out of. Some Indigenous sovereigntists also recognize the BC Treaty Process as a modern termination process because it is designed to shrink the territorial title of a nation within hard borders and encourages the adoption of fee simple property rights, therein negating Indigenous difference rooted in non-Western concepts of land stewardship, rather than ownership.

An act of Indigenous sovereignty

It is also important to acknowledge that other Wet’suwet’en people have reoccupied their territories over the years as well; Unist’ot’en is not an exceptional reoccupation. What is exceptional about it is that it happens to lie in direct route of multiple proposed tar sands and fracked gas pipelines, including three projects that have failed to receive consent from the Unist’ot’en. These three pipelines are the currently halted Northern Gateway Pipeline funded by Enbridge, and the in-progress Pacific Trails Pipeline funded by Chevron as well as the Coastal GasLink Pipeline funded by TC Energy.

Until last week, TC Energy was known as TransCanada. They changed their name in the midst of widespread criticism and ongoing Wet’suwet’en solidarity actions across the world. Coastal GasLink/TC Energy has been constructing a 670 kilometer liquified natural gas (LNG) pipeline that would carry fracked gas from Dawson Creek, BC to the coastal town of Kitimat, where LNG Canada’s processing plant would be located.

The permits for Coastal GasLink’s LNG pipeline were approved by the BC government under the Liberals. More recently, the permits were enforced by the BC government under the New Democrat Party (NDP), Canada’s party of labor which, like New Labour in the UK, has adopted “third way” neoliberal policies and has led multiple attacks on Indigenous sovereignty and land defense movements when it has been in power in BC.

Whether at the hands of the Liberals or the NDP, the Royal Canadian Mounted Police (RCMP) is the paramilitary police force that has attacked Indigenous nations since the time of Canadian Confederation. The RCMP was initially founded in order to wage war against Métis, Cree, and allied non-Natives during the anti-colonial and anti-capitalist Red River Resistances in the 1870s and 80s. The RCMP was born through Indian Wars, and it continues to thrive on them.

In the context of unceded land, colonial resource extraction and transportation, and a paramilitary police force founded through Indian Wars, the Wet’suwet’en struggle is a key political and symbolic battleground for a militant Indigenous movement. Wet’suwet’en is not negotiating a treaty with BC; they are actively reoccupying traditional territories without colonial “permission.”

This is a profound act of Indigenous sovereignty, and it is fitting that it would be occurring in BC. Although Canada itself has never fully solved its “Indian problem,” BC’s lack of treaties is a glaring admission of violent colonial occupation.

Timeline of the Wet’suwet’en struggle

In November 2018, Coastal GasLink named Freda Huson, spokesperson for the Unist’ot’en clan, and Dini ze Smogelgem (Warner Naziel), hereditary chief of the Laksamshu clan, in a civil suit and applied for an injunction to gain access to Unist’ot’en territory and proceed with construction. This civil suit individualizes the Unist’ot’en collective leadership by targeting Huson and Naziel, undermines Unist’ot’en governance, and criminalizes Wet’suwet’en sovereignty.

On December 14, BC Supreme Court Justice Marguerite Church issued the injunction granting Coastal GasLink/TC Energy the go-ahead to proceed with development of the LNG pipeline. Through this injunction, the RCMP is authorized to forcibly clear a path for the construction stage of Coastal GasLink’s fracked gas pipeline.

In swift response to Justice Church’s injunction, a second Wet’suwet’en checkpoint was set up on December 18, outside and before the injunction zone. The Wet’suwet’en Access Point on Gitdumt’en territory, land adjacent to Unist’ot’en, is being enforced by house chiefs of all five Wet’suwet’en clans.

But only three days later, on December 21, Justice Church granted Coastal GasLink’s request for an amendment to include the second checkpoint in the injunction. This ruling by Justice Church overrides the distinct jurisdiction of each clan and renders unceded Wet’suwet’en territory open to RCMP invasion and colonial resource extraction.

As the new year approached, Unist’ot’en and Gitdumt’en reported that hundreds of RCMP officers were amassing in the small towns of Houston and Smithers. On January 7, the RCMP attacked the checkpoint at Gitdumt’en, arresting 14 people including Molly Wickam, spokesperson for Gitdumt’en.

Days after the violent assaults by the RCMP on people at Gitdumt’en, the Unist’ot’en Camp issued a statement reporting that the five hereditary chiefs had decided to allow Coastal GasLink onto Unist’ot’en territory to do preparatory work for the pipeline.

The statement, titled “This Is Not Over,” says that this decision is not a capitulation to the RCMP or Coastal GasLink, nor does it indicate consent for the construction of the pipeline. Instead the statement calls for increased solidarity and reminds us that Freda Huson and Dini ze Smogelgem will appear in court on January 31, regarding the interlocutory injunction.

The statement also hints at a long-term strategy emerging from the hereditary chiefs: a trial focused on Indigenous rights and Aboriginal title, that would seek to extend the landmark decision made in the 1997 case Delgamuuk’w vs. British Columbia.

To give a thorough background of Indigenous resistance in Canada would be a multi-volume historical tome. But I can offer some brief notes. I have already mentioned the Red River Resistances above, perhaps the greatest, and least understood, Native sovereignty movements Canada has ever repressed. Jumping forward in time, I think of the years of blockades in British Columbia through the late 1980s and 90s.

I think of the 1990 Oka Resistance, which the mainstream media was quick to coin as the “Oka Crisis,” a 78-day standoff over the construction of a golf course on a Mohawk burial ground resulting in the mobilization of nearly 1,000 police and army officers. The incredible Abenaki filmmaker Alanis Obomsawin memorialized the strong, proud, and righteous courage of Mohawk communities in her 1993 documentary Kanehsatake: 270 Years of Resistance.

Then there’s Gustafsen Lake in British Columbia, where Secwepemc land defenders spent a month in a standoff with 400 RCMP officers. I think of Burnt Church, a fishing dispute in 2000 in Mi’kmaq waters on the east coast of Canada. Another striking documentary by Obomsawin catches the egregious violence of the police at Burnt Church as well as the blatant disregard for treaty rights in Is the crown at war with us? (2002).

Then comes Six Nations in 2006, a months-long blockade and occupation of a settler housing development on Six Nations territory that re-erupted ten years later in another blockade. In 2013, police attacked Indigenous land defenders, who were standing up against fracking, with rubber bullets and police dogs at Elsipogtog. And there is the 2015 reoccupation of Lelu Island in BC.

These are just the moments of Indigenous sovereignty met with colonial repression that come to my mind; this is far from an exhaustive history. If you had any doubt about the state of colonialism in Canada today, this brief summary of Indigenous resistance, assertion of sovereignty, and violent state repression should begin to reveal the contours of modern settler colonialism in this northern country.

The future of the Wet’suwet’en Struggle

On January 31, Freda Huson and Dini ze Smogelgem (Warner Naziel) appear in court over the interlocutory injunction. After this court hearing, we will know much more about the future of the Wet’suwet’en struggle.

But make no mistake: there is a war raging in British Columbia. The Wet’suwet’en hereditary chiefs are facing off with the colonial Canadian government over their traditional territories, the right to reoccupy them as Wet’suwet’en people, and the right to steward the land and protect it from the construction of Coastal GasLink’s pipeline.

All over the world, we join together in the streets and say: No trespass! Wet’suwet’en Strong!

Sign up for our Newsletter  Help sustain ROAR Magazine