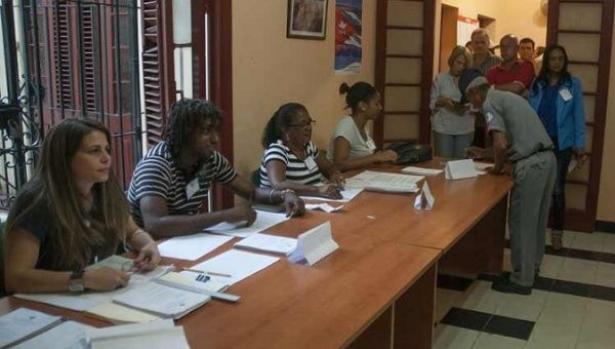 A thousand parishioners gathered in the Methodist church in the Vedado district of Cuba’s capital on a recent Sunday morning. After the revival music and conga drums had faded, the dancers had come off stage and the faithful had lowered outstretched arms, Pastor Lester Fernández rounded off his sermon on the ruinous consequences that the legalisation of gay marriage would bring.

“The Cuban church, as an essential part of society, is worried, and therefore has a right to a public voice,” he hollered into his microphone. “Amen,” replied the flock.

On an island where mass campaigns against official policy are almost unprecedented – and where “scientific atheism” was once state doctrine – evangelical churches have burst on to the political scene in recent months to campaign against gay marriage.

A new Cuban constitution will be put to a referendum on Sunday and, while the state apparatus is campaigning for a “yes” vote, the usually fractured Methodist, Baptist and Pentecostal churches are running a united counter-campaign, although it stops short of explicitly calling for a “no” vote. They fear the new constitution could open the door to gay marriage.

“The Word is clear: God created mankind in his own image,” said Belkis Ros Pascual, 51, standing on Havana’s Malecón last Sunday as Bishop Ricardo Pereira and his wife, Maritza, gathered with more than 100 other Methodists to renew their wedding vows and express support for the traditional family. “God said: ‘Be fruitful and multiply and fill the earth’,” added Ros Pascual, wearing a wedding dress and clasping a bunch of flowers. Ros Pascual and her husband would vote no to the new constitution, she said.

Last October, the Methodist, Baptist and Pentecostal churches organised a petition against the draft constitution which defined marriage as a union “between two people” rather than between a man and a woman. They delivered 178,000 signatures to the National Assembly, an unparalleled event in Cuba. The faithful daubed posters on doors, lamp-posts and buses across the island.

The energetic campaign, chiming with deep-seated homophobia on the island, has overwhelmed the official LGBT rights campaign by the National Center for Sex Education (Cenesex), headed by Mariela Castro, daughter of the former president Raúl Castro, and a timid, mainly online campaign by independent Cuban gay rights activists. It has pressured the state to row back from enshrining marriage as a right for all, regardless of sexuality, in the new constitution. In December, the National Assembly replaced the “between two people” definition with more ambiguous language, saying it would legislate on the issue in the future.

Almost 20% of Latin Americans now identify as evangelicals, up from 3% in the 1980s. And, like the Christian right in the US before them, they are transforming politics in the region;, giving new vigour to conservative parties and right-wing populist movementsthe political right.

In Colombia in 2016, evangelicals voted no to a peace deal with the left-wing guerrilla group, the Farc. The “no” campaign triumphed after evangelical leaders argued that the language of the accords jeopardised the traditional family. In Peru, an evangelical group called “Hands Off My Kids” mobilised more than 1 million people in 2017 to march against the teaching of so-called “gender ideology” in schools. And in Brazil last year, nearly 70% of evangelicals voted for the far-right firebrand Jair Bolsonaro for president.

In Cuba, the Communist party has gradually removed barriers to religion since the 1980s. Half of islanders now identify as religious, and evangelical Christianity has emerged as one of the three main religious forces, along with Catholicism and the Afro-Cuban religion, Santería.

“Pentecostals have been highly adept at integrating national rhythms into their services,” said Andrew Chesnut, religious studies professor at Virginia Commonwealth University. “Afro-Cuban rhythms, which are heavy on percussion, animate Pentecostal services. Likewise, dance which is an important part of Cuban culture, has been integrated into services.”

Cuba’s drawn-out economic and social crisis after the Soviet Union fell created fertile ground for missionaries to tread. “Before the socialist bloc collapsed, many people had the revolution as their god, but afterwards they realised that God is greater than any government,” said Pereira, head of Cuba’s Methodist church.

Deep pockets in times of hardship have also been key. Pereira said his church receives around $200,000 annually from churches in Colombia, Chile, Brazil, Mexico, and the US.

And Latin American churches have channelled funds to Cuban evangelicals for decades, paying for the conversion of thousands of homes into makeshift churches, as well as for musical equipment and food.

“Living through the special period, you did better if you were a Protestant,” said Hal Klepak, history professor at the Royal Military College of Canada. “In any village in Cuba, people who attended the evangelical churches would have a meal after the service – when times are bad, that matters.”

The US Department of State – which has long seen religion as a political lever on the island – also gives generously. Echo Cuba, a Miami charity that “exists to equip and strengthen the Independent Evangelical Churches of Cuba”, has received more than $2m in US government grants over the past decade.

While most Cuban evangelicals, even those campaigning against gay marriage, balk at the suggestion they are doing anything political, there are tight bonds with the Christian right in the US and Latin America.

Cuban pastors regularly meet their counterparts from elsewhere in the Americas to discuss strategy.

Analysts speculate that, given time, gay marriage could become a wedge issue for a wider, anti-statist, free market agenda. “The campaign for a ‘no’ vote is the first time this group has become visible politically,” said Ariel Dacal Díaz, a Marxist political analyst. “But this force is brewing – it could be mobilised for other projects.”