Two articles about the UE Locals that are on strike after GE sells the locomotive plant to Wabtec and contract talks fail to achieve a new contract upholding years of union contract gains. 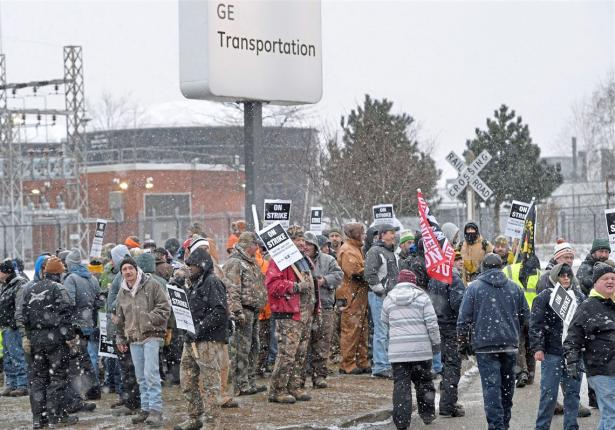 UE Locals 506, 618 Strike "For the Jobs Our Communities Deserve" in Erie

1700 members of UE Locals 506 and 618 went on strike today to preserve decent wages and working conditions at the GE Transportation locomotive plant. Their new employer, Wabtec, took over the business on Monday and imposed "terms and conditions" that include mandatory overtime and arbitrary schedules, wage reductions of up to 38 percent for recalled and newly-hired workers, and the right to use temporary workers for up to 20 percent of the work in the plant.

The UE negotiating committee worked long into Tuesday morning and were not able to convince the company to negotiate an acceptable short-term agreement that preserves the wages, benefits, and working conditions negotiated with GE over the past eight decades.

“We are extremely disappointed that the company could not see its way to agree to continue the terms and conditions that we have worked under for decades. Their refusal leaves us with no choice but to go out on strike to protect our members' and our children’s future,” said Scott Slawson, President of UE Local 506.

Karlene Torrance of UE Local 618 said, “We are gratified by the outpouring of support we have received from our friends, neighbors, and community in Erie. We will need their support now more than ever.”

“The American people are sick and tired of corporate America and their wealthy CEOs ripping off the working families of this country.  Today,  I'm proud to stand with the 1,700 locomotive manufacturing workers of Local 506 and 618 of the United Electrical Workers in Erie, Pennsylvania in their fight against the Wabtec corporation to maintain decent wages and working conditions.

“Wabtec must honor the existing collective bargaining agreement with the UE union in Erie, Pennsylvania.”

The Erie UE locals have received letters of support from UE Local 610, which represents Wabtec workers in Wilmerding, the industriALL global labor federation which represents 50 million workers around the world, unions in Canada, Great Britain, France, Italy, Brazil, Mexico and Turkey, and from Railroad Workers United, a cross-craft alliance of union railroad workers in the U.S. and Canada, all of whom have written to Wabtec CEO Ray Betler indicating that they are following the negotiations in Erie closely and are prepared to take action.

UE Locals 506 and 618 also also received a letter of support from American Legion Carl Neff Post 571 on Friday, recognizing the Erie local's work raising funds for veterans and stating “your generosity and commitment to veterans makes Erie a stronger community. We urge your new employer, Wabtec, to continue to provide you with good jobs that allow you to give time and money to support veterans, and we will stand with you in your struggle to maintain good jobs for the future of Erie.”

A day after Wabtec Corp. completed an $11 billion deal with GE Transportation, more than 1,700 workers at an Erie plant walked off the job as talks for a new four-year labor contract with the Wilmerding rail products manufacturer collapsed.

The United Electrical, Radio and Machine Workers of America, through its Local 506 and Local 618, called the strike at 5 a.m. on Tuesday after failing to reach an agreement that “preserves the wages, benefits, and working conditions negotiated with GE, their former employer, over the past eight decades.”

A labor strike is a highly unusual move in the manufacturing industry. The Erie plant has been a scene of discontent for the union for years, after GE Transportation built a manufacturing facility in Fort Worth, Texas, that shifted work away from Erie in 2017.

The plant has been a magnet for campaigning politicians as diverse as President Donald Trump, U.S. Sen. Bob Casey, D-Pa., and, most recently, U.S. Sen. Bernie Sanders of Vermont, who wrote to Wabtec shortly after launching his campaign for president last week.

Mr. Sanders has weighed in on the conflict, writing a letter to Wabtec CEO Raymond T. Betler last Friday.

“Let's be clear, Wabtec is not a poor company,” he wrote. “It is not going broke. Through the first three quarters of last year, Wabtec made a $256 million profit and had enough money to give you a $3.5 million compensation package.”

Wabtec has proposed a two-tier system that would maintain wages and benefits for all current employees, who earn a starting wage of $35 an hour, but pay a new hire or a recalled workers about 38 percent less.

The proposal would impose mandatory overtime and the right to use temporary workers for up to 20 percent of the work in the plant, according to the union’s statements.

“We are extremely disappointed that the company could not see its way to agree to continue the terms and conditions that we have worked under for decades,” said Scott Slawson, president of UE Local 506. “Their refusal leaves us with no choice but to go out on strike to protect our members' and our children’s future.”

Wabtec, in a statement last week, said the Erie plant is “GE Transportation’s least competitive site and it has been for years.” The company said its proposals are in line with work conditions negotiated with UE-represented workers at its manufacturing facility in Wilmerding.

Mr. Betler, asked by an analyst about the labor dispute on Monday, said he is eager to resolve it.

The Wabtec-GE Transportation deal, first announced May 2018, creates a Fortune 500 company, headquartered on the North Shore, that sends railroad products to 100 countries and aims to design a fully autonomous railroad system.

“Our view is very simple: We want to integrate that workforce into our organization,” Mr. Betler said.

He acknowledged the two-tier wage structure is the “biggest sensitivity” but that “allows us to be competitive internationally (without affecting) wages for any of the legacy employees.”

“We’re working through that with the union and we believe we’ll be able to settle that agreement hopefully in the near-term,” he said.