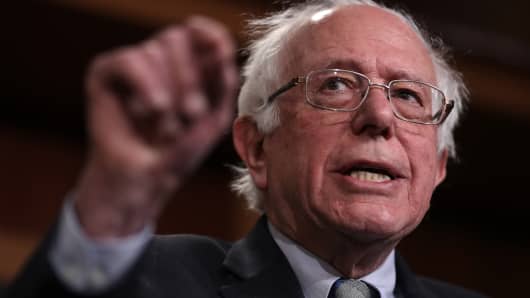 About 1,700 employees at an Erie, Pennsylvania, locomotive plant — represented by the United Electrical, Radio and Machine Workers of America union — started their strike early Tuesday. The workers were unable to come to terms with Wabtec, the western Pennsylvania-based rail transport company that took over the facility in its merger with GE Transportation. GE announced the more than $11 billion merger deal last year as part of a broad restructuring.

Sanders, a Vermont independent who routinely rails against companies that he says give workers a raw deal, said he was "proud to stand" with the workers. In a tweeted statement Tuesday, Sanders said, "Americans are sick and tired of corporate America and their wealthy CEOs ripping off working families."

The senator has built a political following in part due to his broadsides against corporations and business leaders such as Amazon and its CEO, Jeff Bezos. He has frequently pushed American corporations such as McDonald's and Walmart to boost minimum wages and offer better benefits.

His involvement in the Wabtec fight brings more political intrigue than usual.

Sanders recently launched a 2020 presidential campaign as a Democrat. The strike takes place in a state carried by President Donald Trump in 2016 that Democrats may need to win in order to take back the White House. By slamming free-trade deals and attempting to revise them, Trump has tried to appeal to disillusioned manufacturing workers in areas similar to Erie, a city on the northwestern edge of Pennsylvania.

Sanders' support for the striking workers has "absolutely" nothing to do with his presidential ambitions, his spokesman Josh Miller-Lewis said. The senator has "stood with working people and against the greed of large, profitable corporations his entire life," he added.

The union, known as UE, has a history with Sanders. It endorsed the senator in 2016 in his bid for the Democratic presidential nomination. Last week, Sanders wrote a letter to Wabtec CEO Raymond Betler in part arguing that Wabtec is "not a poor company" and "is not going broke."

UE says it was "not able to convince [Wabtec] to negotiate an acceptable short-term agreement that preserves the wages, benefits, and working conditions negotiated with GE" after the merger became official Monday. The plant had employed GE workers for about 80 years before the industrial giant's overhaul.

UE has several grievances with the new employer at the Erie plant. The union says Wabtec's terms "include the introduction of mandatory overtime and arbitrary schedules, wage reductions of up to 38 percent for recalled and newly-hired workers, and the right to use temporary workers for up to 20 percent of the work in the plant."

In response to the criticism, Wabtec pointed to an opinion piece written by executive Greg Sbrocco. He wrote that Wabtec's proposal would keep current wages of $35 per hour, a rate that he said went "beyond anything in this region."

He wrote that the company would continue to offer competitive benefits. Sbrocco also said the proposal falls in line with conditions and benefits seen at a facility it runs in Wilmerding, a borough near Pittsburgh where its headquarters is located. He also noted that Wabtec finished negotiations with four separate unions except UE.