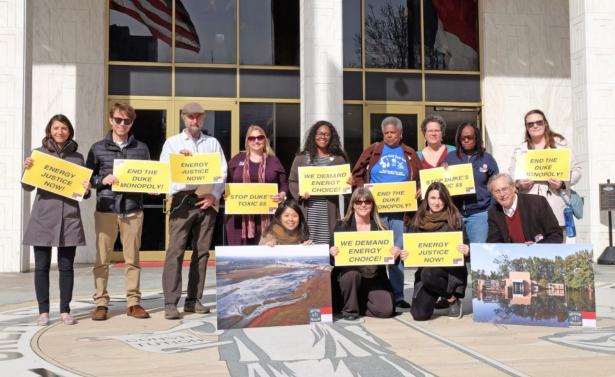 A newly-formed coalition of advocacy groups has launched a campaign to end Duke Energy's longstanding monopoly control over most of North Carolina's electric system in hopes that permitting competition among power generators would hasten the shift to clean energy and bring pollution relief to vulnerable communities.

The members of the Energy Justice NC coalition include local, regional, and national environmental and social justice organizations. Among them are 350.org, Appalachian Voices, Center for Biological Diversity, Down East Coal Ash Coalition, Food and Water Watch, Friends of the Earth, and the NC Environmental Justice Network. Another member of the coalition is climate watchdog NC WARN, which has long pressed for an end to Duke's monopoly.

The coalition recently held a press conference in Raleigh to announce its formation and outline its goals, which also include getting state and local officials to stop accepting the company's political contributions and appointees to the N.C. Utilities Commission who will stand up to Duke and put the public interest first. The coalition announced it was launching a petition for energy choice in North Carolina and invited individuals, organizations, and businesses to sign on. It also said it is pursuing legislation, though none has been introduced yet.

"Duke's energy monopoly, where dirty power is king, needs to end," said Jean Su, energy director at the Center for Biological Diversity. "The climate crisis demands we ditch fossil fuels as fast as possible, but Duke's stranglehold on North Carolina is stopping the clean energy transition in its tracks."

Based in Charlotte, North Carolina, Duke Energy is the largest U.S. power provider, generating 90 percent of the electricity used in its home state. It's also the top carbon emitter among U.S. utilities, according to the Energy and Policy Institute. In 2017, it released about 105 million metric tons of carbon dioxide alone, down from almost 153 million in 2014.

As its falling emissions show, Duke Energy has been increasing its renewable energy capacity in recent years. According to the company's latest sustainability report, its generation diversity in terms of owned capacity is 39 percent natural gas and fuel oil, 36 percent coal, 18 percent nuclear, and 7 percent hydropower and solar. But critics say Duke's current plan to have renewables, including hydropower, represent 14 percent of its generation capacity by 2030 isn't adequate given that the world's leading climate scientists have warned that humanity has only 12 years to hold global warming to a maximum of 1.5 degrees Celsius, beyond which the risks of drought, flood, and extreme heat worsen significantly.

Clean energy advocates have also criticized the company's growing reliance on natural gas, which is mostly methane — an exceptionally potent greenhouse gas in the short term. Duke is one of the partners in the Atlantic Coast Pipeline, a controversial project with major environmental justice implications that would carry fracked gas from West Virginia to North Carolina. So much natural gas leaks into the atmosphere during drilling, transportation, and storage that its use for generating electricity is even more damaging to the climate over the coming decades than the use of coal.

Electricity was first produced for commercial distribution in the 1880s, and economic as well as safety concerns led to the industry's regulation — first by municipalities, then by states. The industry soon came to be viewed as a "natural monopoly" that worked most efficiently if the number of providers in a given market were restricted, if the industry were "vertically integrated" (meaning the same companies produced power and operated distribution systems), and if the cost structure was regulated by state government.

That model was formalized by the Public Utility Holding Company Act of 1935, a landmark New Deal-era law that grew out of government investigations into the Wall Street Crash of 1929 and the resulting Great Depression, which included the collapse of a public utility holding company empire that wiped out 600,000 shareholders. PUHCA was sponsored by U.S. Rep. Sam Rayburn of Texas and U.S. Sen. Burton Wheeler of Montana, both Democrats.

In North Carolina, the current utility regulatory system is rooted in the creation of a post-Civil War railroad network. The railroads' growing size and monopoly power spurred rural shippers to demand more government regulation to keep rates low, leading to the 1891 creation of the N.C. Railroad Commission, which came to oversee telegraph, telephone, steamboat, and canal companies as well as electricity providers. The N.C. Utilities Commission eventually spun off and today also regulates companies that provide natural gas and water, among other services.

But starting in the 1970s, high fuel prices, environmental concerns, and technological innovation led to the reimagining of the monopoly utility model. In response, Congress passed a series of laws that effectively chipped away at it — for example, by permitting non-utility generation companies to sell power to utilities at market prices, and by authorizing federal energy regulators to allow transport of third-party power over utility lines.

Restructuring efforts experienced a setback following the California electricity crisis of 2000-2001, in which energy companies — led by Houston-based Enron, which later went bankrupt — created an artificial supply shortage to drive up prices in the state's competitive market, leading to blackouts and skepticism about free-market power. But by 2005, restructuring was once again on the table as Congress passed a law that, among other things, repealed the 1935 law creating the utility monopoly model. 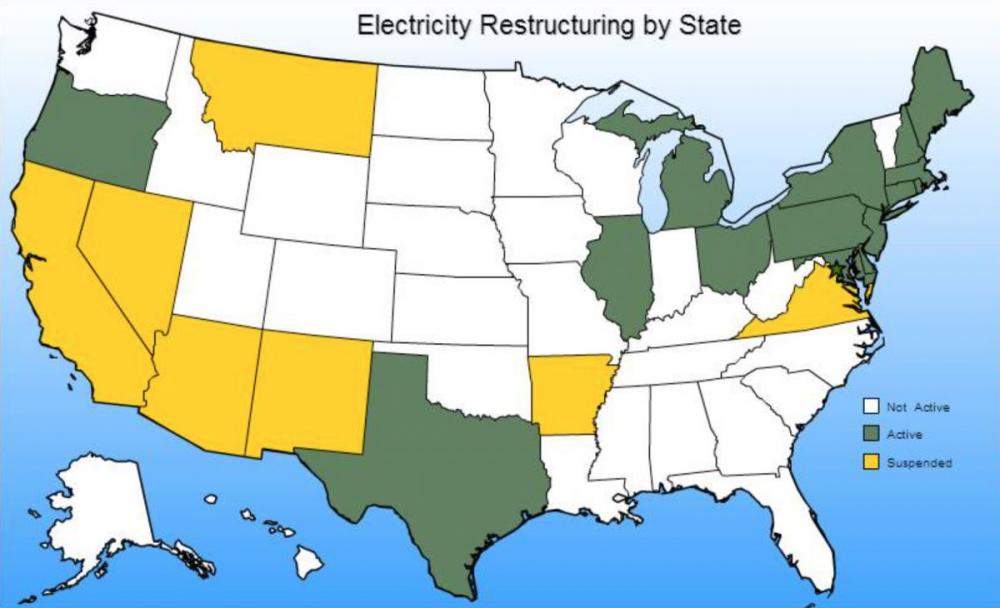 Texas is now the only state in the South where residential customers have a choice of electricity providers. (Map is from this 2016 report by the University of Texas at Austin Energy Institute.)

Today, the states that have restructured their electricity markets to allow competition among power providers are concentrated in the Northeast and New England, as seen on the accompanying map from a University of Texas at Austin Energy Institute report. But the South remains dominated by monopolies.

While Arkansas and Virginia began work toward restructuring electricity markets, those efforts are now on hold. Arkansas currently offers no competitive choice, according to the American Coalition of Competitive Energy Suppliers, while Virginia offers choice only for non-residential customers in the Appalachian Power and Dominion service areas, and for residential customers who want 100 percent renewable energy and whose utilities don't provide it. Georgia allows electricity choice only for large commercial and industrial customers.

In fact, the only Southern state with real electricity choice is Texas, where residential customers in most places can pick among providers.

But Southern states' adherence to the utility model is facing challenges — and not only in North Carolina. There's also an effort underway to restructure the electricity market in Florida, where Duke Energy is a major player, serving the northern and central parts of the state as a regional monopoly.

An Alachua, Florida-based political committee called Citizens for Energy Choices is currently trying to place a constitutional amendment on the 2020 ballot to open the state's electricity market to competition. The group needed to collect 76,632 signatures to qualify their proposal's wording for state Supreme Court review; it submitted 79,132 valid signatures in January. The proposal calls for both wholesale and retail electricity markets in the state to "be fully competitive." The initiative's listed supporters are primarily small businesses.

If the court approves the wording, Citizens for Energy Choices would need to submit at least 766,200 valid signatures by Feb. 1, 2020, to get the proposal on the November 2020 ballot. To pass, the measure would need the approval of 60 percent of voters, and it would require the state legislature to pass laws to implement restructuring.

Citizens for Energy Choices registered with the state last September and spent over $1.1 million through Jan. 31. The group gets its funding from the Coalition for Energy Choice, a nonprofit whose own donors are not subject to mandatory disclosures. Opposing the ballot measure is a group called Floridians for Affordable Reliable Energy, whose board includes an executive board member of the state AFL-CIO, the former executive director of the state Democratic Party, and president of the Hillsborough County Democratic Black Caucus. Other opponents include the Florida Chamber of Commerce and Associated Industries of Florida.

Critics of the Florida measure cite concerns over affordability. However, studies have produced conflicting findings about how restructuring affects residential rates. A 2015 report on the competitive Texas market found some customers paid less while others paid thousands of dollars more than monopoly electric utility customers. But the American Public Power Association's recent analysis of federal data from 1997 to 2017 found little difference in retail electric rate increases in monopoly vs. competitive states; indeed, the average retail cost of electricity for residential customers is 11.25 cents per kilowatt-hour in competitive Texas and 11.29 cents in monopolized Florida. Meanwhile, electricity choice advocates point to data showing electricity prices are falling in states with competition — and are rising most dramatically in Florida's monopoly system.

Something that is clear is that, at least in North Carolina, people across the political spectrum would like greater access to clean energy. A poll released in 2017 by Conservatives for Clean Energy found that 63.9 percent of North Carolina Democrats, 53.9 percent of unaffiliated voters, and 25.7 percent of Republicans say support for new clean energy is important to them. Far smaller portions of those groups said that increased competition among providers is a priority — but far more than said they supported offshore oil and gas exploration, which has gained political traction in the state in recent years. While no conservative groups have joined Energy Justice NC to date, the John Locke Foundation, a leading conservative policy group, voiced support for ending Duke's monopoly following the company's disastrous 2014 coal ash spill into the Dan River.

Sue Sturgis is Editorial Director at Facing South. Sue joined the Institute in November 2005 as director of Gulf Coast Reconstruction Watch, a project to document and investigate the post-Katrina recovery. A former staff writer for The News & Observer in Raleigh, North Carolina, and the Independent Weekly in Durham, North Carolina, Sue directs and writes for the Institute's online magazine, Facing South, with a focus on energy and environmental issues. She was the first journalist to be awarded the North Carolina League of Conservation Voters' Catalyst Award for her commitment to educating the public about important environmental issues.

Sue has authored or co-authored numerous Institute reports, including "Life After BP" (2011), "Faith in the Gulf" (2008), "Hurricane Katrina and the Guiding Principles on Internal Displacement" (2008) and "Blueprint for Gulf Renewal" (2007). Her work has also appeared in other publications including The American Prospect, The Progressive, and Salon. Sue holds a master's degree in journalism from New York University and a bachelor's in social work from Penn State.

Support a voice for change in the South

Facing South, the online magazine of the Institute for Southern Studies, is an essential resource for activists, policy makers, scholars and others working for lasting change in the South. Your support today helps us break important stories about the South and shine a light on injustices in this critical region.

You can also invest in the future of Southern, independent journalism by becoming a Sustainer today.

Thank you for supporting fearless media and a voice for change with your gift today.