Death by Charity: the Dark Side of Decluttering

Charity provides just enough relief to the violence of extreme inequality to make its perpetuation possible. 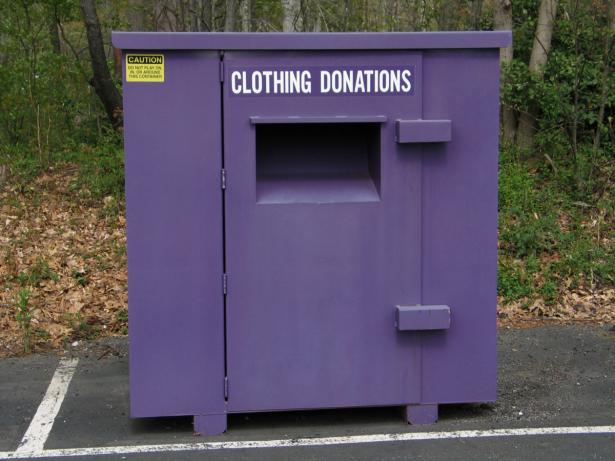 In the newly released Netflix show “Tidying Up with Marie Kondo,” the eponymous host demonstrates the art and joy of conscious decluttering through a series of home makeovers. As illustrated by the widespread media coverage and social media excitement, the show clearly resonates with those of us who simply have too much and would be happier with less.

Amid the #konmari buzz came news of the tragic death of Crystal Papineau — a 35-year old homeless woman in Toronto who died while trapped in the deposit slot of a clothing donation bin. She had likely been searching for the warm clothes that would sustain her during the harsh winter months.

The nuisance of excess and the deadliness of deprivation make for a sharp and devastating outline of the binary reality of life under capitalism.

Indeed, Papineau’s death is devastating. But as housing and shelter activists have noted, it is not surprising. There are over 8,000 homeless people in Toronto, Canada’s largest city. The night Papineau died, Toronto shelters were, like so many other nights, at capacity. Amid these conditions of widespread homelessness and insufficient respite, 145 homeless people died in Toronto between January 1, 2017 and June 30, 2018. This year, Papineau has already been replaced as the latest death of a homeless person in the city.

Papineau’s death is devastating — but it is not unprecedented: at least six others in Canada have died after becoming stuck in donation bins. An incident in West Vancouver led to the closure of all of the city’s receptacles.

Papineau’s death is devastating and it should be ironic: a woman living in poverty was killed by the infrastructure specifically designed to facilitate charitable giving. But it is only ironic if we consider charity to be separate from, and counter to, the cruel and violent logic of capitalism. In reality, charity is not only compatible within capitalism — it is the product of its logic, and makes its perpetuation possible.

A Partner in Crime

Consider one particular “charitable” industry in Canada: food banks. Introduced as a stopgap measure during the recession in the 1980s to mitigate the pressures of unemployment, yet, 30 years later, they are a mainstay of the Canadian landscape. Each month, over 850,000 people in Canada access food banks.

As Canadian food security activists note, food banks fail to address even the immediate needs of those who are food insecure. Only about one in four households experiencing food insecurity actually uses a food bank. And for those who do, the rations are insufficient and unpredictable. In 2016, one in six Canadian households that rely on food banks had members that were currently or recently employed, belying the myth that participation in the capitalist market safeguards against poverty.

That 36 percent of food bank users in Canada are children or youth reflects the sobering reality that our economic situations are largely outside of our control: our lives are governed by whether we were born on the “winning” or “losing” side of the economic divide. As Food Bank Canada notes, “the root cause of hunger in Canada is low income, which consistently affects more than four million of us at any given time.”

But food banks do not actually address the endemic of low income. In Ontario, food banks are serving more and more people even while measures guaranteed to exacerbate inequality and poverty are being implemented: repeal of the planned increase to minimum wage to C$15/hour (itself insufficient, given the cost of living); the cancellation of the basic income pilot project; and cuts to planned increases in social assistance.

Food banks can and do co-exist with the very measures that create food insecurity — indeed, The Daily Bread Food Bank’s CEO, Neil Hetherington, made clear that province-wide cuts to social assistance will drive up food bank use.

Food banks are the economic equivalent of “Febrezing” an overflowing garbage bin: they minimize the stench of inequity, making the rot slightly less putrid, even as it continues to fester.

We don’t need to take the garbage out if we can keep the odor under gag-worthy — never mind that we continue to ingest its noxious fumes.

Charity functions so well within capitalism because it stabilizes the political, social, and affective disequilibrium created by the extreme inequality it engenders. Under capitalism, there is no incongruence between the numerous charitable ventures of the fast food franchise, Tim Hortons — children’s camps, sports leagues, food giveaways and support for coffee farmers in the Global South — and its notorious pouting and petulance about the minimum wage increase in Ontario. Franchisees scrapped workers’ paid breaks and health and dental plans to offset the legislated increase to minimum wage in Ontario.

A corporation that annually sends “20,000 kids from low-income families…to participate in a life-changing camp experience” is making sure that those it employs cannot afford to send their own kids to camp.

Tim Hortons willingly redistributes wealth through its charitable projects. But the forced redistribution of wealth through wages is unappealing. Paying people for their work is an obligation, not an option — a legal duty, not a gift. There is no moral benefit to be extracted from settling your debts to your employees. On the contrary, wages force recognition that the profit interests of corporations are only satisfied by the hard work of wage-labor employees.

Charity distracts us. And, more generally, charity reconciles the immorality of extreme inequality by attributing morality to the people and institutions that benefit from it. While charity redistributes some wealth, it does so through a mechanism that justifies its unequal distribution. It ensures that there are always people sufficiently impoverished to rely on a corporation’s charitable handouts — and that we are sufficiently grateful to not question the need for handouts.

Charity operates as a balm at the individual level as well. Charity abates the guilt of our excess and even makes us feel good about ourselves. A hand reaching out for help can be used to pat ourselves on the back — a perversity that speaks to the all-encompassing power of economic well-being in a capitalist world order: wealth endows us with the capacity to not only take, but also to give; to enjoy not only material comfort, but moral comfort as well.

But charity is dependent upon our ability to give — and not another’s right to receive. Donors choose what to give, how much to give, when to give and to whom. We give because it is convenient — perhaps part of a Kondo-inspired decluttering project. When it is no longer comfortable for us to do so, we stop.

Studies show that donations drop during difficult economic times. That this happens at the precise moment when it is most needed is testament to the fact that, in the charitable relationship, agency is the exclusive privilege of ‘the donor.

The success of capitalism lies in its ability to create “solutions” to problems of its own making. Too much stuff? Buy Marie Kondo’s book and learn how to whittle down your excesses. Exhausted from the nine-to-five workday? Spend the money you earned to buy a spa package or a vacation to unwind. Massive economic inequality? Try charity.

That the very same capitalist entity is often implicated in creating both the problem and its solution — as in Nestlé, which continued production of its fulsome line of chocolates even as it gained ownership of the Jenny Craig weight loss franchise — is evidence of the primacy of the “profit incentive.” It is the logical glue holding together seemingly incompatible activities within the same enterprise.

But relying on the solutions that emanate from the very paradigm that has created the problem means we can never overcome them. Indeed, the weight loss industry has not “solved” our weight “problem” — instead, it has made us hate ourselves, poisoned us with the “lo-cal” versions of the same chemicals that made us “fat”, meanwhile failing to offer us lasting weight loss. Audre Lorde’s famous words ring true: “the master’s tools will never dismantle the master’s house.”

If there is doubt that charity is a “tool” in the “house” of capitalism, then the circumstances of Crystal Papineau’s death should provide clarity. Papineau was killed by the anti-theft feature of the clothing donation bin produced by Rangeview Fabricating Inc.: pinch-point bars intended to prevent removal of the bin’s contents.

The securitization of private property is a capitalist solution to a capitalist problem: enforcement of ownership, that exclusive right to access and to withhold the fruits of our shared habitat from others. Papineau’s death by a mechanism of private property enforcement was shocking, but it is part of a system that consistently takes life in much less spectacular ways.

Canada generates 13 million tonnes of food loss and waste each year — even as 4 million Canadians experience food insecurity. In 2016, there were more than 1.3 million empty or mostly-empty homes in Canada — even as over 200,000 people experience homelessness. Marie Kondo advises us that we have so much stuff it is making us unhappy — even as a young woman is killed trying to access that very stuff, just to survive. Upholding this cruelly absurd system implies no less than a lethal enforcement of private property.

Papineau’s death has not convinced us that we need to overhaul the system that creates obscene excess for some and excruciating dispossession for others. In response to the incident, Rangeview Fabricating Inc. has halted production of the donation bin model that killed her. The company is urging its charity partners to remove its anti-theft bars and is working with university students to design a new prototype. The Toronto mayor announced a review of the city’s donation bin system.

Cathy Crowe — a Toronto street nurse and organizer with the newly-formed group Shelter and Housing Justice Network (SHJN) — captures the inadequacy of this response: “We have a mayor that deals with homeless deaths by fixing the steel metal structure of the clothing donation box.” And, unsurprisingly, as long as the administrators of our system are also its beneficiaries, the solutions offered up will be of the “damage control” variety: those intended not to destruct, but rather, to restore.

A charitable society is incompatible with a just one. The ability to give and the need to receive are equally products of a system that fails to distribute the world’s resources so that everyone has what they need not just to survive, but to thrive. Charity provides just enough relief to the violence of extreme inequality to make its perpetuation possible.

It may be difficult for us to imagine a society in which “decluttering disciples” do not discard of their excess through donation; where we do not depend on deadly pinch-bars to enforce the deadly unequal distribution of goods. But if we’re unimaginative, its not because alternatives do not exist but because we are the products of capitalist philosophy and, ourselves, cognitively limited by its logical borders.

It is within this logic that we seek relief inside the metal walls of a clothing donation box: for some of us, affective relief; for others, political relief. And for Crystal and too many others, physical relief. Yet as surely as this box offers us its protection, it also confines us. For Crystal, it also proved suffocating. Her death is yet another reminder we should not have needed. This box does not need reinforcement — it needs dismantling.

Khadijah Kanji holds a Masters in Social Work. She works in research, programming, and public education on issues of Islamophobia, racism, transphobia/homophobia and other areas of social justice.