In Defense of Ilhan Omar, Again

Did the House pass such a full-throated Resolution about anti-Semitism after Charlottesville, or after the recent Pittsburgh synagogue massacre? 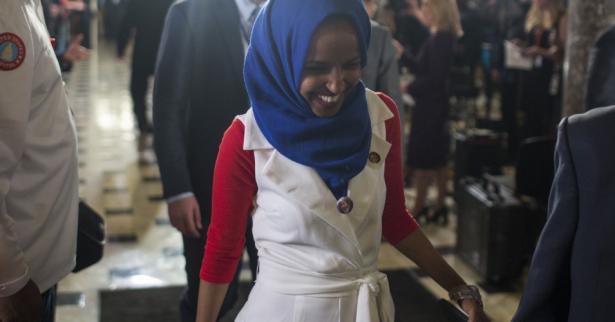 The political denunciations of Omar are defensive, self-righteous, and cynical., Zach Gibson/Getty Images

Ilhan Omar is again at the center of controversy, this time for remarks she made last week at a panel discussion at Busboys and Poets, a Washington, D.C. bookstore and restaurant. Omar’s “offending” comment was a reference to “the political influence in this country that says that it’s ok for people to push for allegiance to a foreign country.” She was immediately accused of feeding centuries-old anti-Semitic tropes about the nefarious influence of a Jewish cabal. A chorus of denunciations have ensued, a number of prominent House Democrats, some of them Jewish but others not, have taken particular offense, and apparently the House Democratic leadership has decided to pass a four-page Resolution denouncing anti-Semitism and especially references to “dual loyalty,” implicitly rebuking Omar (the Washington Post headline declares that “Rep. Omar’s comments force Democrats to act on anti-Semitism measure.” Indeed, House leadership was forced to do nothing; they are choosing to do this). Meanwhile, Republicans call for more drastic action against her, shedding crocodile tears about bigotry, seeking to inoculate their party by absurdly comparing Omar to the viciously racist Steve King, and gleefully sowing division among Democrats.

The political denunciations of Omar are defensive, self-righteous, and cynical. They represent political grandstanding and not a serious response to either her comments or to the real harms caused by anti-Semitism in the U.S., which are not being caused by Omar or her supporters.

The viral video clip in which Omar made the offending comment is nine minutes long. But people have been jumping on twenty of the words she uttered, in approximately ten seconds, taking them out of context, and treating those words as an attack on Jews when they are not an attack, and indeed do not mention Jews.

She is a Muslim whose personal experiences as a refugee make her especially sensitive to the plight of marginal Third World peoples, including Palestinians.

It is true that Omar lacks the sensitivity to Jewish people that comes from a certain experience that she does not have. There are many different ways that people from different parts of the world experience the world. (Is it really necessary for this to even be said in the year 2019?) Omar is a Somali-American who was born in Mogadishu and grew up in Baydhabo, not New York or Los Angeles. And she is a Muslim whose personal experiences as a refugee make her especially sensitive to the plight of marginal Third World peoples, including Palestinians. Her words about the politics of U.S. foreign policy, and about Israeli-Palestinian relations, are sometimes infelicitous. But hers is a perspective shared by many young people. And it is motivated by a passion for equality, and only by lifting her words out of context can they be seen as hateful.

I encourage everyone to watch the nine-minute video in its entirety. Far from a fire-breathing or hateful speech, Omar can be seen very carefully trying to parse her words in order to express her frustration, to defend herself, and to clarify her position on the rights of Palestinians. And while she does not fully succeed, she also tries to be careful to attend to the sensibilities of Jewish people, who she describes both as “constituents” and as “colleagues.”

Here is the video:

The “offending” words occur at 4:08. But to establish the context, I have transcribed the first five minutes of the video. Here are Omar’s words, verbatim:

“I get emotional . . . Because I know that I have a huge Jewish constituency and, you know, every time I meet with them, they share stories of safety and sanctuary that they would love for the people of Israel and, most of the time when we’re having the conversation, you know, there is no actual relative that they speak of, and there is still lots of emotions (sic) that comes through because its family, right? My children still speak of Somalia with passion and compassion even though they don’t have a family member there. But we never really allow space for the stories of Palestinians seeking safety and sanctuary to be uplifted. And to me it is the dehumanization and the silencing of a particular pain and suffering of a people that should not be ok and normal. And you can’t be in the practice of humanizing and uplifting the suffering of one if you’re not willing to do that for everybody. And so for me I know that when I hear, right, my Jewish constituents, or friends or colleagues, speak about Palestinians who don’t want safety or who aren’t deserving, I stay focused on what the actual debate about what that process should look like. I never go in the dark place of saying ‘here’s a Jewish person, they’re talking about Palestinians, Palestinians are Muslim, maybe they’re Islamophobic.’ I’ll never allow myself to go there, because I don’t have to. And what I am fearful of, is that because Rashida (Tlaib) and I are Muslim, that a lot of our Jewish colleagues, a lot of our constituents, a lot of our allies, go to thinking that everything we say about Israel, to be anti-Semitic because we are Muslim. And so, to me, it’s something that becomes designed to end the debate, because you get in this space of, ‘yes, like, I know what intolerance looks like, and I’m sensitive when someone says the words you use are resemblance of intolerance.’ And I am cautious of that, and I feel pained by that. But it’s almost as if every single time we say something, regardless of what it is we say, that is supposed to be about foreign policy or engagement or advocacy about ending oppression, or the freeing of every human life, and wanting dignity, we get to be labeled as something, and that ends the discussion. Because we end up defending that, and nobody ever gets to the have the proper debate of what is happening with Palestine. [Pause, applause.] So I want to talk about the political influence in this country that says that it’s ok for people to push for allegiance to a foreign country, I want to ask, why is it ok for me to talk about the influence of the NRA or fossil fuel industries or Big Pharma, and not talk about a powerful lobbying group that is influencing policy. I want to ask the question of why is it ok for you to push, for you to be, there’s so many people, I mean, most of us are new, but many members of Congress have been there forever, some of them have been there before we were born, so I know many of them were fighting for people to be free, for people to live in dignity in South Africa, I know many of them fight for people around the world, to have dignity, to have self-determination, so I know that they care about these things. But now that you have two Muslims that are saying ‘there’s a group of people that we want to make sure have the same dignity that you want everybody else to have’ we get to be called names and we get to be labeled as hateful. No, we know what that looks like. We experience it every single day. I receive death threats. . . . There are gas stations that have written on their bathrooms ‘assassinate Ilhan Omar. . . .’”

Meanwhile Israel and Palestine descend deeper into despair, and Trump and Jared and Bibi smile. And the world burns.

Omar does not center her discourse on “anti-Semitic tropes.” And the broader context of her “offending” remark was a legitimate question: why are Muslim-Americans like her and Rashida Tlaib under an automatic cloud of suspicion — as they are for many — because they care about Palestinian rights, while it goes without question that Americans can simply love Israel if they choose? Why are many Americans — yes, unfortunately, including many Jews, though surely not all and perhaps not even most — more comfortable treating Bibi Netanyahu as a “partner” than treating American citizens and public officials like Omar and Tlaib as partners? These are real questions, and Omar posed them in the course of defending herself, and also noting the threats to which she is regularly subjected as a Muslim member of Congress (threats which are apparently being investigated by the FBI). That is the context of her words about “foreign allegiance.” The context doesn’t remove the sting that some Jewish people might legitimately feel. But that does not make Omar an anti-Semite.

Indeed, the proposed House Resolution seems almost like a validation of Omar’s question.

Did the House pass such a full-throated Resolution about anti-Semitism after Charlottesville, or after the recent Pittsburgh synagogue massacre? No. But now that one young Muslim-American Congresswoman has uttered ten words about “allegiance to a foreign country” in a nine-minute speech about human rights, it becomes necessary for Congress to make a big statement of denunciation?

Necessary? Such a claim begs credulity.

And so House members will rally around some flag, and join together to rebuke Ilhan Omar.

Meanwhile Israel and Palestine descend deeper into despair, and Trump and Jared and Bibi smile. And the world burns.