For the First Time, the Progressive Caucus Will Have Real Power

New rules will help Rep. Pramila Jayapal (D-Wash.) turn the caucus into a force to be reckoned with. Members of the Congressional Progressive Caucus (CPC) gained members in the new Congress. 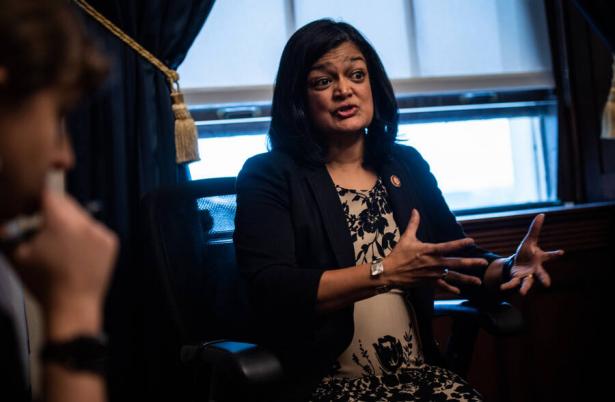 U.S. Rep. Pramila Jayapal (Wash.), the current co-chair of the Congressional Progressive Caucus (CPC) will lead as the sole chair of the CPC for the 117th Congress.,

The Democratic majority in the House is shaping up to be one of the most progressive — and partisan — ever, as members of the 117th Congress assume office January 3. While some moderate Dems lost their House seats, the Congressional Progressive Caucus (CPC) gained members, including Reps. Jamaal Bowman (N.Y.) and Cori Bush (Mo.), both members of the Democratic Socialists of America.

Yes, Beltway pundits will bellyache about the death of cross-party comity. But in Congress, bipartisanship does not serve the interests of the majority of Democrats, especially those who suffer the effects of structural racism and generational poverty. Look no further than three ​“crowning” bipartisan achievements of the 1990s: the 1994 crime bill, the Welfare Reform Act of 1996 and the 1999 repeal of Glass-Steagall bank regulation. The latter came home to roost in 2008, enabling the financial crisis. The George W. Bush administration’s subsequent $700 billion bank bailout rescued Wall Street but did nothing for the 10 million families who lost their homes.

Fast forward 12 years and we are again headed toward economic catastrophe. The Covid-19 pandemic and the expiration of pandemic-related unemployment benefits will move 14 million Americans one step closer to deep poverty and homelessness. This level of economic destitution has not been seen since the 1930s.

One difference between the Covid-19 Recession and the 2008 Great Recession is that progressives in Congress have since gotten their act together. The CPC has restructured itself (starting January 3) into a disciplined, small‑d democratic political operation that will push progressive legislation on the inside while helping raise a ruckus on the outside.

Under new rules approved in November 2020, the CPC will no longer be led by two co-chairs. For the 117th Congress, Rep. Pramila Jayapal (Wash.) will lead. Another change requires members to vote as a bloc on issues supported by two-thirds of the caucus. Should a member fail to adhere to this rule at least 66% of the time, they could face expulsion. In addition, members must attend CPC meetings and respond to requests from the caucus whip (currently Minnesota’s Rep. Ilhan Omar) about where they stand on issues.

If some CPC members find the new rules unacceptable, no sweat. Jayapal made clear she ​“would rather have people who are really committed to the Progressive Caucus in the caucus and participating rather than sort of just having it as a label.”

Bowman greeted news of the reforms with a tweet: ​“Ready to flex our muscle and join the era of collective progressive power.”

The Congressional Progressive Caucus has restructured itself into a disciplined, small-d democratic political operation.

Jayapal, who entered Congress in 2016 (after a 20-year career as a community organizer), admits in an interview with Seattle’s alternative weekly, The Stranger, that it will become all but impossible to pass progressive legislation should Republicans control the Senate. ​“Then we have to use an inside/​outside strategy like the one I was part of when we got Obama to agree to [the Dream Act],” Jayapal says. ​“We may have to be the wind behind the sails that helps Joe Biden and Kamala Harris deliver change through executive action, if we can’t do it legislatively.”

Because the Democratic majority in the House is so slim — just 13 seats — a united CPC could even extract the concessions from House leadership so desperately needed right now: eviction moratoriums, student debt relief, unemployment assistance.

These types of policies are anathema to party centrists, who apparently would rather captain a sinking ship than surrender any control to partisans in steerage. But providing actual economic relief is essential to prevent Democratic losses in the midterms and 2024. Movement-backed Democrats must be disciplined and organized in working with the new president, who inherits a crisis.

Otherwise, a shipwreck is imminent.

[JOEL BLEIFUSS, a former director of the Peace Studies Program at the University of Missouri-Columbia, is the editor & publisher of In These Times, where he has worked since October 1986.]