As the movement for justice in education grows, divesting from prison profiteers is a concrete way educators can join the call to end mass incarceration. 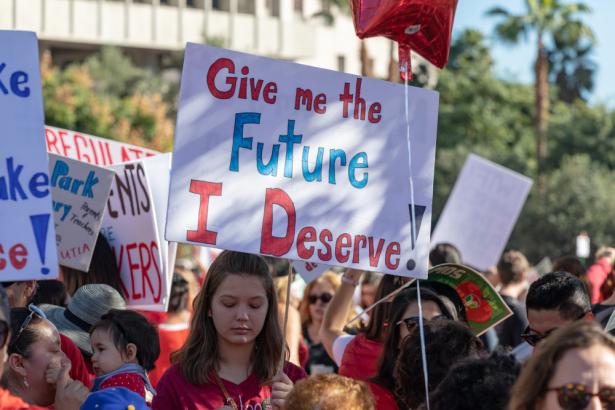 It’s been just over a year since West Virginia teachers began their historic strike, kicking off a new era of education organizing. And educators across the country have spent the last several months building on the public support for protesting teachers and highlighting how dire their working conditions have become without adequate funding.

Striking teachers have shown that they’re concerned about far more than pay and benefits. The #RedForEd movement has brought issues of social justice to the bargaining table, placing their labor fight in the broader struggle for equity in their communities.

Teachers and their unions are expanding the fight for more just communities beyond contract negotiations. A recent two-part report from the American Federation of Teachers (AFT) exposes how public pensions are intertwined with some of the most harmful institutions out there — immigration detention centers and private prisons.

AFT released the first report, which identified managers that invested in immigration detention centers in August, shortly after the Trump administration adopted its family separation policy across the border. The second part, released last month, examined the companies and asset managers that profit off private prisons and mass incarceration. In both reports, the union urges trustees to divest from companies that fuel both industries — whether that be companies like General Dynamics, CoreCivic and GEO Group, which directly own and operate detention centers and private prisons, or the hedge funds and private equity firms that find other ways to profit off incarceration.

Both reports make the human rights case for divesting from prison profiteers. Private prisons and immigrant detention centers both primarily affect communities of color. And both have long been accused of human rights violations. Why should pension funds make their way to industries solely designed to lock humans up?

Those human rights issues affect how teachers work, too. Striking teachers have raised the issue of racial equity in the classroom — immigration and incarceration issues are at the top of the list of problems. AFT cites research from the Economic Policy Institute that shows the intimate connection between criminal policy and education policy. As the AFT report explains, children with incarcerated parents are more likely to develop learning disabilities and drop out of school.

“Children’s cognitive and noncognitive problems, to which parental incarceration contributes, and the concentration of children of incarcerated parents in low-income minority neighborhoods and in segregated schools, create challenges for teachers and schools that are difficult to overcome,” the EPI report says, calling for an end to the war on drugs and the mass incarceration it fuels. “How educators can add their voices to demands for an end to this war is a challenge that we should all begin to confront, if our other educational reform efforts are not to be frustrated by unjustifiable criminal justice policy and practice.”

As the movement for justice in education grows, divesting from prison profiteers is one of the concrete ways educators can join the call to end mass incarceration. A handful of cities and states, including New York, New Jersey, and California, are already leading the way.

“As a parent and the spouse of an educator in New Jersey,” said Byheijja R. Sabree, a member of the Journey for Justice Alliance, which supported the report, in a statement from AFT. “I was surprised to find out that part of my husband’s pension money was being used to fund the prisons we are desperately trying to keep our children out of. The pension fund in our state just voted to get out of these risky investments, and I know other states are following suit. Pension funds can play a powerful role in holding private prison companies accountable.”

Negin Owliaei is a co-editor for Inequality.org and Researcher at the Institute for Policy Studies. Before joining IPS, she worked as a journalist and digital producer at Al Jazeera Media Network, where she covered social movements and the internet for the award-winning program The Stream.