Minnesota has become a hotbed of labor unrest within Amazon’s ranks, where a contingent of workers organized via local East African community group Awood Center first pressured the company’s brass to sit in on negotiations in November. 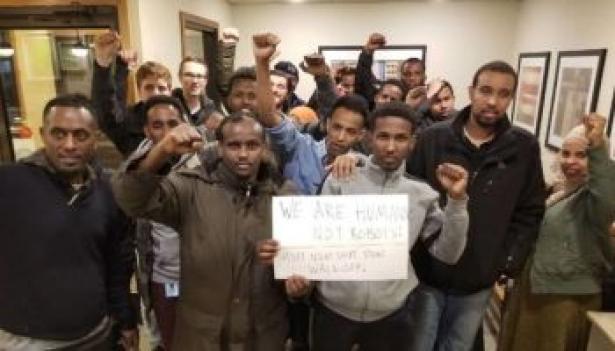 Minnesota has become a hotbed of labor unrest within Amazon’s ranks, where a contingent of workers organized via local East African community group Awood Center first pressured the company’s brass to sit in on negotiations in November and staged a mass protest outside their facility a month later.

Now, Awood is claiming another victory: rallying together a three-hour strike of the “a majority of workers in the stow department” at the MSP1 facility in Shakopee, Minnesota.

The workers’ complaints—written on a legal pad and posted to Facebook this afternoon—remain consistent from last year: over-reliance on temp labor, lack of self-determination, and crucially, a brutal pace of work that they feel does not take into account the need for bathroom and prayer breaks. (Minnesota is home to a considerable population of Somalis, many of whom are devout Muslims.)

At the rally last December, which included a speech from freshman Representative Ilhan Omar, workers described themselves as disposable to Amazon, with one sharing a story of nearly miscarrying while on the job. At the conclusion of those speeches, a number of workers left their shifts early to join the group of protesters. It is, as far as we’re aware, the first protest of its kind at one of the ecommerce company’s gargantuan fulfillment centers. Likewise—although they’re common in Europe—this may be the first strike at an Amazon facility in the U.S.

The number of strikers is estimated at 30, and according to Abdirahman Muse, the executive director of Awood Center, the strike took place from midnight to 3am local time on Friday.

“A small group of associates left during their shift, some of whom went to a nearby restaurant so we disagree on how this activity has been portrayed,” Amazon wrote in a statement to Gizmodo. “There was no impact on our operations as the majority of employees continued to work on behalf of customers.” A spokesperson further claimed that MSP1 “is staffed by 95% full-time employees locally.”

“We are very concerned with the increasing and unsafe workloads. The “rate” they demand from us is dangerous and continues to increase. We’ve seen a lot of people injured or terminated if they can’t keep up. While we are facing these challenging situations, we don’t get any support from our managers. All they will communicate with us about is their concern that we reach our rate goals,” a worker at MSP1, Abdimajid Hassan, told Gizmodo through an Awood representative. “It was time for action to show that we are united in demanding good, safe jobs.”

Updated to include additional comments