As Web Turns 30, Pioneer Tim Berners-Lee Says 'You Should Have Complete Control of Your Data'

"The fight for the web is one of the most important causes of our time." 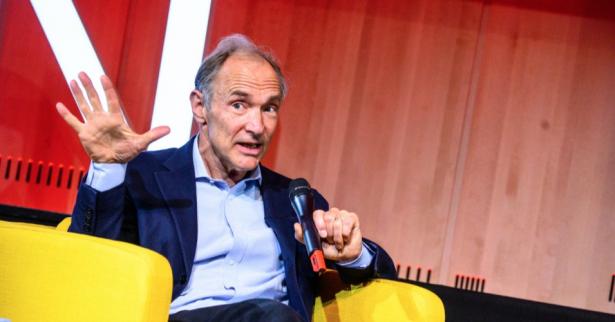 Sir Tim Berners-Lee, founder of the World Wide Web, spoke at the European Organization for Nuclear Research (CERN) on Tuesday,CERN

"You should have complete control of your data. It's not oil. It's not a commodity," Sir Tim Berners-Lee charged ahead of an event celebrating the 30th birthday of the World Wide Web—his invention that created the internet as we know it.

"The web is for everyone and collectively we hold the power to change it. It won't be easy. But if we dream a little and work a lot, we can get the web we want."

Berners-Lee has long advocated for strong digital rights, an open internet, and breaking up corporate tech giants. At the Web@30 conference, hosted by the European Organization for Nuclear Research (CERN) in Switzerland on Tuesday, he shared his ideas for reforming the web on a global scale.

A major aspect of his vision for the future of the web requires rethinking personal data. "You should not be able to sell it for money," Berners-Lee told reporters at CERN, according to Agence France-Presse, "because it's a right."

Personal data essentially has become a form of currency that internet users turn over—sometimes unintentionally—to major tech corporations such as Amazon, Facebook, and Google in exchange for using their services. Through a variety of initiatives, Berners-Lee is working to change that.

The British computer scientist created the web at CERN in 1989. As The Associated Press reports, "Berners-Lee has since become a sort of father figure for the internet community, been knighted by Queen Elizabeth II, and named as one of the 100 most important people of the 20th century by Time magazine."

Today, Berners-Lee is the director of the World Wide Web Consortium (W3C) and founding director of the World Wide Web Foundation, which is working to build a Contract for the Web. The aim of the contract is to bring together governments, companies, and citizens to negotiate rights and responsibilities, with the end goal of ensuring the web is "a human right and built for the public good."

"The Contract for the Web must not be a list of quick fixes but a process that signals a shift in how we understand our relationship with our online community," Berners-Lee wrote in an open letter on Monday. "It must be clear enough to act as a guiding star for the way forward but flexible enough to adapt to the rapid pace of change in technology. It's our journey from digital adolescence to a more mature, responsible, and inclusive future."

30 years on, what's next for the web? Read @timberners_lee’s letter on where we stand as a web community. It is up to us to fight for the web we want #ForTheWeb #Web30https://t.co/c5rketpZFu

Berners-Lee, in the letter, identifies "three sources of dysfunction affecting today's web" that must be addressed:

While, as Berners-Lee notes, no one person, corporation, or government is solely at fault for the web's current problems, resistance to what he and many others see as necessary systemic reforms has come from powerful companies and political actors.

In the United States, for example, the Federal Communication Commission (FCC) repealed net neutrality protections in 2017, serving big cable companies at the expense of the public interest—a move Berners-Lee strongly opposed. The web's 30th birthday comes as U.S. lawmakers are considering The Save the Internet Act, which would overturn the FCC rollback and restore the 2015 Open Internet Order.

A coalition of activist and media groups, including Common Dreams, has re-launched StopTheFCC.net to collect signatures for a petition calling on Congress to restore nationwide net neutrality protections.

"The fight for the web is one of the most important causes of our time. Today, half of the world is online," Berners-Lee concludes in his open letter. "The web is for everyone and collectively we hold the power to change it. It won't be easy. But if we dream a little and work a lot, we can get the web we want."