'A Poll Tax By Any Other Name': Florida GOP Undermines Newly-Restored Voting Rights for 1.4 Million People

"The Constitution can't operate as the supreme law of our nation if it's consistently subverted." 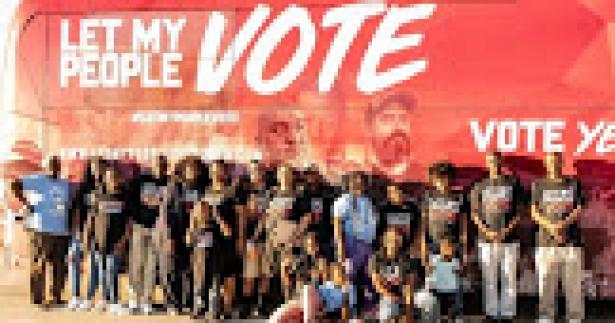 Civil rights advocates Tuesday slammed Republicans in Florida for passing a bill that would severely undermine a law approved by voters last year that restored voting rights to residents with felony convictions.

Four months ago, Florida voters passed Amendment 4 in a state referendum to allow many of the state's former felons to vote. But on Tuesday, the Republican-controlled House Criminal Justice Subcommittee passed CRJ 3 in a party-line vote.

While the passage of Amendment 4 was celebrated by voting rights advocates nationwide, the new GOP measure would undermine the hard won victory by requiring former felons to pay all court fees in order to have their right to vote granted.

More than 64 percent of Florida voters approved Amendment 4 in November, restoring voting rights to about 1.4 million former felons. Convicted murderers and felony sex offenders are excluded under the amendment, and felons must complete all terms of their sentence including parole and probation to be permitted to vote.

The ACLU of Florida said Tuesday that by forcing Floridians with felony convictions to pay courts as well, CRJ 3 "would effectively disenfranchise two categories of returning citizens for life: those with very small financial obligations that they will never be able to pay due to poverty and those with financial obligations for non-violent property crimes."

The group's political director, Kirk Bailey, called the bill "an affront to Florida voters" which "will inevitably prevent individuals from voting based on the size of one's bank account."

"If this bill passes, it will undoubtedly continue to disenfranchise those who have already served their time and paid their debt to society," Bailey said in a statement. "This is exactly what we were worried about from the beginning – legislative attempts to undermine the will of the people who voted for second chances and to rid Florida of the last vestiges of its Jim Crow era past."

"The House bill raises serious constitutional concerns," he added. "We urge lawmakers to uphold the will of Florida voters and withdraw this deficient bill."