The Algerian Army’s Chief of Staff has called upon parliament to declare President Abdelaziz Bouteflika unfit and replace him with a caretaker. But leaders of Algeria’s massive protest movement have rejected the ploy, demanding more systemic change. 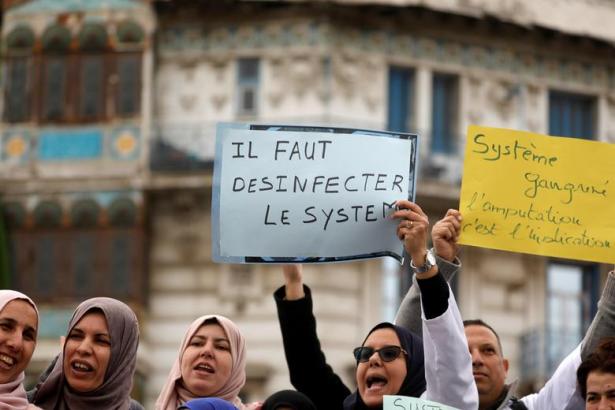 After weeks of mounting protests in Algeria, with hundreds of thousands gathering to call upon ailing 82-year-old President Abdelaziz Bouteflika to relinquish office, there are further signs of the president’s inner circle deserting him.

The army’s chief of staff, Gen. Ahmed Gaed Salah — backed by a key part of the country’s ruling coalition, the National Rally for Democracy, and the General Union of Algerian Workers — has echoed protesters’ demands for the president to step aside, proposing a managed process that would see power ceded to a senior member of the country’s political establishment.

But protesters buoyed by the apparent groundswell of support for their cause have dismissed the compromise measure from the country’s ruling elite as little more than a tactical olive branch intended to maintain power within the close political circle that has formed around the infirm president.

However, protest leaders have been scornful of the move. Opposition leader Sofiane Djilali, president of the Jil Jadid party, dismissed the offer and was quoted as saying, "Neither the opposition nor the people will accept this operation. The whole system has to go."

Djilali’s comments found ready echoes upon the street, as protesters tired of almost 30 years of economic and political stagnation voiced their rejection of the offer. “Of course I will still protest until our demands come true,” a spokesperson for one of the leading protest groups — No to the Fifth Term, No to the Perpetuation of Corruption — told Al-Monitor, adding that any decision on Bouteflika’s fitness for office should have been taken at the time of his devastating stroke in 2013 and not now. For the protest group, the latest call from Salah was not so much a reflection of the popular will as a cynical gambit to retain the army’s influence in government. The army must hand power to the people, they said.

Others seized upon the general’s comments as a de facto admission of the army’s longstanding control on government. His comments were revealing, protester Khalil Che told Al-Monitor, as “now he will be facing his responsibility because now many people will know that Gaid Salah is the real government."

“Since 1962 [the date of Algeria’s independence], the military [has been] the real power that makes the decisions,” Khalil said.

The mood among many of the millions who have flooded Algeria’s streets over the previous five weekends similarly appeared as defiant as ever. “The system must go. There is no point for it [to resist],” Belkacem Abidi, 25, told Reuters as he gathered with around 6,000 others — mostly students — in central Algiers following Salah’s intervention.

If the army maintains its plans to invoke Article 102, it risks setting itself on a collision course with the protesters, whose determination to wrest the system from political insiders who have coalesced around the president appear only matched by their numbers and level of support.

According to the constitution, Article 102 allows for Algeria’s constitutional council to declare the presidency vacant if the incumbent is too sick to exercise the functions of office. The council must then appeal to parliament to also declare him unfit. The leader of the upper house, Abdelkader Bensalah, would then take over in a caretaker capacity for 45 days. However, what power Bensalah would have or what his ability would be to enact genuine reform remains unclear.

“Protests will continue. … Algerians’ demands include a change of the political system,” lawyer and activist Mustapha Bouchachi told Reuters.

“The implementation of Article 102 means that the symbols of the system will oversee the transition period and organize presidential elections,” Bouchachi added.

Recent weeks have seen the defection of many of Algeria’s leading parties and politicians from the side of the government to that of the protesters. On Sunday, the president’s own National Liberation Front backtracked on its support for the incumbent’s suggestion for a "national dialogue conference" intended to oversee major constitutional reform, with spokesman Hocine Khaldoun telling the private Dzair TV network the conference would "not solve the problem."

"Honestly, we are going to revise our position on the conference," Khaldoun added, saying that the "conference will not solve the issue because participants will not be elected."

Algeria’s popular protests have grown in numbers since initial demonstrations against Bouteflika’s proposed fifth run for office broke out in Bordj Bou Arreridj, about 125 miles from the capital, on Feb. 13. Fueled by a series of apparent government climbdowns — including rescinding the president’s fifth bid for power — their numbers have since swollen as Algerians from all strata of society have flooded the country’s cities to demand the departure of the country’s paraplegic leader.

Algeria’s protests have been greeted with some apprehension by neighboring countries that typically look to the North African state as either a partner in counterterrorism or a significant source of hydrocarbons, though thus far exports have remained unaffected.

Within Algeria itself, the pressure from the street appears unrelenting. The No to the Fifth Term protest group said the end was within sight. Victory “is not that far," the group's spokesperson told Al-Monitor, adding, “We must continue our pressure on unconstitutional individuals and the military establishment.”