Out of Patience: NYC Nurses Take On Hospitals For Better Staffing

Consolidation has meant more patients and fewer nurses to treat them. Medical staff are expected to do more than ever and to do it quicker. 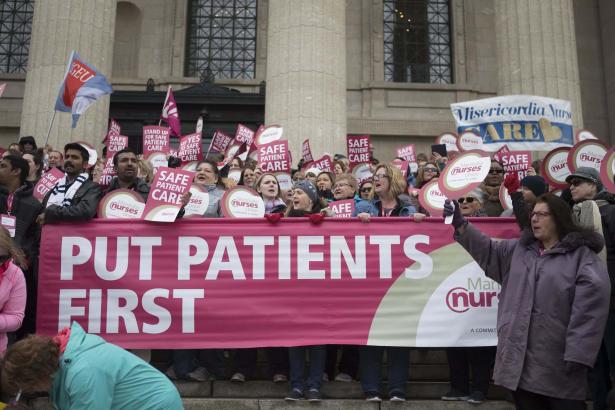 How do you know when your employees are unsatisfied? When they vote by a 97 percent margin to authorize a strike. And if you think these workers are displeased, you should talk to their customers — or rather, their patients.

They complain of waiting in emergency rooms for hours, sometimes days; of lying on stretchers in hallways among surplus medical supplies, their fellow ill and bloody infirm limping and coughing past them; of clicking their attendant button and waiting and wondering when someone will arrive to alleviate their suffering.

“You’re husbanding care between your sickest patients and your most recent patients, who may come in with chest pain or shortness of breath,” said Jonathan Hunter, a 12-year emergency room veteran at Mount Sinai-St. Luke’s Hospital in Morningside Heights. When he arrives for his shift in the morning, he often finds 20 patients who have been in the ER for half a day, sometimes as long as three days, and are still waiting to be transferred to beds upstairs.

“Conditions have never been worse,” he said. “It’s extremely dangerous.”

Hunter is among more than 10,000 members of the New York State Nurses Association (NYSNA) at the city’s three major private hospital systems — New York-Presbyterian, Mount Sinai and Montefiore — who, as The Indypendent goes to press, have been working without a contract since December. On March 6, the union voted overwhelmingly to walk off the job. It was almost unanimous: 8,533–230. Twelve days later, they gave the New York City Hospital Alliance, which represents the three hospital chains at the bargaining table, notice of an impending strike. The walkout, originally slated for April 2, was suspended after the Alliance indicated it was prepared to make concessions on NYSNA’s key demands, which revolve around patient care.

The progress in the contract battle highlights the power nurses have by virtue of where they stand in a medical field that has become increasingly corporatized and consolidated. While the institutions they work for began as humble philanthropic endeavors to meet the needs of the city’s growing population in the 19th century — or, in the case of New York-Presbyterian, in the 18th century — they have evolved into hulking behemoths in a profit-driven medical landscape. They’ve gobbled up smaller, cash-strapped community hospitals and have left vast areas of the city with limited medical options.

Some 20 hospitals have shut their doors in New York over the last two decades, including Cobble Hill’s Long Island College Hospital and St. Vincent’s in the West Village. Both hospitals have since been converted into luxury condominiums. One apartment where St. Vincent’s, a hub for HIV/AIDS care and research, once stood sold for $40 million to an anonymous buyer. There are now only two major medical centers serving the 300,000-plus people who live below 23rd Street in Manhattan: Lower Manhattan Hospital, run by New York-Presbyterian, and Mount Sinai’s Beth Israel, which is downsizing.

The consolidation of care in New York is part of a national trend that has made it easier for large hospital networks to bargain with insurance companies but has reduced quality of care while raising costs for patients.

“We’re just being gouged by hospitals,” said Timothy Faust, author of the forthcoming Health Justice Now: Single Payer and What Comes Next. “They have monopolies. They have pedigrees. And there’s nobody really big enough to begin negotiating against them. The average insurer is too small to bring down prices. There’s no real counterweight to escalating costs, and they rise much faster than the rate of inflation.”

Consolidation has also meant more patients and fewer nurses to treat them. Medical staff are expected to do more than ever and to do it quicker.

The nurses The Indy spoke with don’t want to strike, but they say the Hospital Alliance has refused to meet the demands they say are necessary to ensure the health and safety of their patients.

Last year, NYSNA members filed nearly 3,800 “protests of assignment” (POAs), signed by more than 20,000 nurses. Under state law, nurses are held liable for the treatment they deliver. The POAs are a way of documenting conditions that render it impossible for them to perform their duties to the best of their ability. They describe cramped and overcrowded conditions, dangerously ill patients and a scarcity of colleagues upon whom to rely.

The union wants the hospitals to lower their patient-to-nurse ratios, which it warns are perilously high, to reduce clinic wait times and to open up more beds.

“Inhumane” and “savage” are the words NYSNA President Judy Sheridan-Gonzalez, who has over 30 years ER experience, uses to describe the overcrowding at the hospitals. “We have now eight patients per floor on a stretcher in a hallway for their entire hospital admission, with only a screen separating them from the world, and it doesn’t even cover them,” she said, outlining conditions at Montefiore Hospital in the Bronx, where she works. “There’s no privacy, no bathroom, no toilet.”

The hospitals could open up more beds, but they refuse to do so, she said. When Montefiore acquired the bankrupt Westchester Square Medical Center in 2013, for instance, it turned it into an outpatient facility. There are now three vacant floors there, with dozens of empty beds. “It already exists and they could open it, but they say they won’t,” Sheridan-Gonzalez said. “I can’t tell you why. I suppose it’s because they can’t make money off of it.”

Nurses’ working conditions, and by extension health-care conditions, in the Bronx are among the most rough-and-tumble in the city. Overcrowding was so intense at the onset of flu season in October that City Councilmember Ritchie Torres (D-Bronx) set up a hotline for patients to file complaints with the city Department of Investigation. It was also in the Bronx that a rank-and-file movement to transform the 42,000-member nurses union, led by Sheridan-Gonzalez and other veteran RNs, began. It culminated in the 2011 ouster of NYSNA’s previous leadership, which was heavily bureaucratic and closely aligned with employers.

And employers are firing back. After NYSNA gave notice to strike, the Hospital Alliance warned that despite its offer of “significant wage increases, pension and health benefit funding, and an explicit offer to explore increased staffing, union leadership has called on their nurses to walk away from patients’ bedsides so they can advance their political agenda of mandating rigid, inflexible staffing ratios.”

Asked to respond to the criticism that a strike would only harm patients, Sheridan-Gonzalez thought for a moment: “I guess it is like teachers going on strike,” she said. “Teachers going on strike deprives students of an education and in some cases their lunch, if that’s what they depend on. But the bigger picture is that if you don’t take a stand when all else fails, you end up hurting people in the long run. It’s an excruciating decision.”

Nurse Nichelle Ogiste, several months pregnant, stepped out of the cancer ward where she works at Mount Sinai on the Upper East Side on March 18 to show her solidarity with a temporary picket line that had formed outside. “My co-workers are as supportive as they can be while I’m in this condition,” she said. “It gets tough sometimes, but if we had better ratios, it would be better for the patients, and maybe we can get lunch more often.”

The Hospital Alliance warns that “[r]igid staffing ratios would lower patient care and drastically increase costs for not-for-profit hospitals — resulting in layoffs of other important members of patient-care teams.” Yet the hospitals in question are not hard up. According to the latest publicly available figures, New York-Presbyterian made $404.5 million after expenses in 2017. Mount Sinai took in $205.2 million and Montefiore Health System $55.3 million. Executive compensation at these nonprofits runs in the millions and comes with perks like a housing allowance and, in some cases, personal chauffeurs.

NYSNA is part of a broad coalition that is pushing Albany to pass the Safe Staffing for Quality Care Act, which would mandate that the staffing ratios NYSNA is demanding in its contract dispute be instituted statewide. The mandatory patient-to-nurse ratio in intensive-care units, for instance, would be two to one. There’s no set ratio now, but NYSNA members say it is common for them to balance three or four intensive-care patients at once, along with a regular load of a half-dozen who are recovering from surgery or life-threatening ailments.

California is the only state that sets such ratios. Hospital groups spent millions of dollars to defeat a safe-staffing law on the ballot in Massachusetts last year. A comprehensive 2010 study by the Health Services Research Journal that compared treatment in California to that in New Jersey and Pennsylvania showed that lower ratios improved patient outcomes and lowered mortality rates. California, the study found, also had lower turnover among nurses, which, as it means retaining trained staff, could save hospitals money.

“Our patients are not being treated in a humane manner,” said Sheridan-Gonzalez. “The poorer you are, the less white you are, the less wealthy you are, the less social capital you have, the worse you are treated. We believe every patient has a right to dignity and respect and a right to quality healthcare. Quality healthcare is very much linked to having enough caregivers and providers to appropriately give you the time that you need to listen to you and talk to you and understand you and help you, and that’s not possible in the current situation. Not at all.”

She sees the rank-and-file revolt among nurses as having broader implications for the wider labor movement.

“We’re in a position to take on a corporate structure in a way that many people are frightened to, or feel they could be harmed or replaced or run into trouble,” she said. “I’m hoping that if we go on strike and are successful, that it will motivate labor out of the doldrums and get more unions to take on struggles, rather than spending their time going to Albany or Washington and begging for crumbs.”

NYSNA members working at the city’s public hospitals are also in the midst of contract negotiations. Their contract expires in June.