Lawyers for the Left: In the Courts, In the Streets, and on the Air

Michael Steven Smith’s smart and compelling Lawyers for the Left, and you’ll find yourself plunged into the contradictions and swirling through the vortex where that question—what is the law? — is on everyone’s mind all the time.

April 18, 2019 Bill Ayers Portside
Printer friendly
Lawyers for the Left: In the Courts, In the Streets, and on the Air Published April 18, 2019 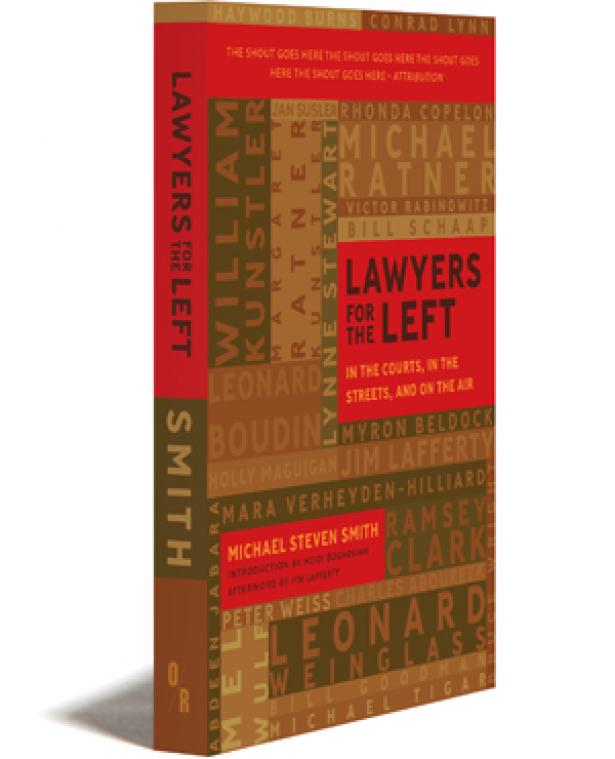 “We were partying hard and having a great evening, and then the law arrived and spoiled everything.”

“She tries to keep the books accurately—squeaky clean, she says—but always just this side of the law.”

“I studied international law at Cambridge.”

“That just proves the law of gravity.”

“I fought the law and the law won.”

What is the law?

Take a minute to think it over.

The law might mean the cops in one context, the legal profession in another, an armed force or an intellectual discipline. It can mean a system of governing rules and regulations, edicts, bills, and decrees, or it can point toward larger principles, testable hypotheses, and universal standards of behavior.

So what is the law?

Marinate on it for another moment.

Now open Michael Steven Smith’s smart and compelling Lawyers for the Left, and you’ll find yourself plunged into the contradictions and swirling through the vortex where that question—what is the law?—is on everyone’s mind all the time. It takes on a unique urgency and a fresh vitality as it’s debated case by case and issue by issue by these committed advocates battling against a system they see as deeply and unfairly stacked against their clients—Black freedom fighters, Puerto Rican independistas, Indigenous and immigrant rights activists, women warriors, anti-war militants, water defenders, dissidents and radicals. None of the lawyers you’ll meet here holds fast to the traditional view that the law is simply a civilized mechanism for resolving disputes in an intelligent and reasoned way. They agree, rather, that any honest analysis of the law begins elsewhere, noting that in all times and in all places, the law is constructed in the service of whatever social/economic system created it. In other words, the law is a mechanism of control that works to protect and perpetuate existing social relations.

But control can come in many forms and multiple guises: crushing repression, the boot and club and prison cell in some instances; in other cases subtler devices including compelling mythologies passed on through generations as well as promises of rights and justice written into charters and bills of rights. Each apparatus offers cracks and contradictions within which to build resistance and expand the scope of human freedom. And this is where movement lawyers, “people’s lawyers,” and Lawyers for the Left spring to life. They not only defend the oppressed and the marginalized and the exploited when they’re under siege, showing up at the jailhouse or the courtroom; they also find the cracks and proactively search out the open spaces in the law where they might drive a wedge or light the fuse of possibility in the cause of more peace, more justice, more participatory democracy.

Their analysis of the law as an instrument serving the status quo becomes a vital and clarifying lens in every case they pursue. Anatole France observed ironically that “The law, in its majestic equality, forbids rich and poor alike to sleep under bridges, to beg in the streets, and to steal their bread.” Exactly: we are equal under the law, and neither Bill Gates nor Jeff Bezos nor the homeless woman outside the coffee shop is allowed to loiter or ask for spare change. Because these advocates recognize that we live under a system of racial capitalism, they fight every case and each battle with an eye to the inherent injustices spawned by that reality.

Frederick Douglass famously said, “If there is no struggle, there is no progress. Those who profess to favor freedom, and yet depreciate agitation, are men who want crops without plowing up the ground. They want rain without thunder and lightning. They want the ocean without the awful roar of its many waters.” These movement lawyers have had those words inscribed on their hearts as they’ve fought for voting rights, Puerto Rican independence, an end to Jim Crow, women’s freedom, LBGTQ plus justice, and more. The country would look dramatically different today if it weren’t for the good work of Arthur Kinoy and Bill Kunster, Lynne Stewart and Haywood Burns, Jan Susler and Bruce Wright.

The portraits, profiles, personal reminiscences and in-depth interviews collected here offer a breath-taking journey through the major popular movements in the US over the past several decades, as well as a detailed picture of the lawyers and legal advocates who stood shoulder-to-shoulder with the activists and extraordinary ordinary people who built those struggles. In their lives and their work they remind us that Nelson Mandela and Fidel Castro were people’s lawyers in their times. And there’s one more common thread that connects these folks across epochs, geographies, and specific issues: a belief that the movements for justice are the true engines of change and must, therefore, take the lead. People’s lawyers stand in solidarity but acknowledge the centrality of the activists in moving the fight for justice forward.

This book is one part inspiration, and an equal part handbook for a life of purpose lived in the law. It should be required reading in any law school that has “justice” in its creed or “rights” and “democracy” in its mission statement. Lawyers for the Left asks an essential question: How can anyone live a life as a lawyer that doesn’t make a mockery of their values? The answer is on every page.

[Bill Ayers is Distinguished Professor of Education (retired) at the University of Illinois at Chicago, and author of Fugitive Days, Public Enemy, and Demand the Impossible!]