labor Another Big Victory for Labor 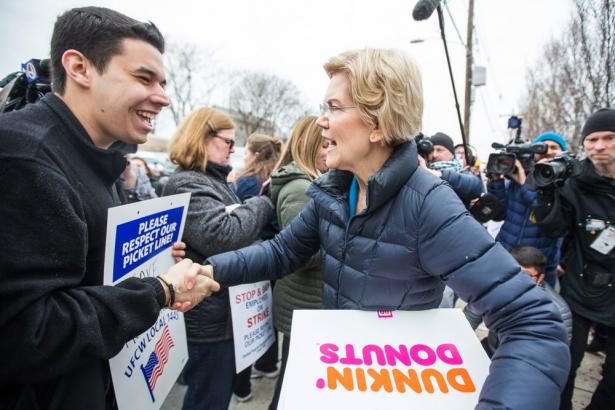 On April 12, Senator Elizabeth Warren pulled into the parking lot of a Stop & Shop in Somerville, Massachusetts. She delivered coffee and a box of Dunkin’ Donuts to striking employees holding signs that read “Don’t Support, Don’t Shop,” and offered them her blessing. The following week, Joe Biden made his own Stop & Shop appearance, telling a crowd of striking employees in south Boston, “What’s happening here is workers are not being treated across the board with dignity. They’re not being treated like they matter.” And last Friday, presidential candidates Pete Buttigieg and Amy Klobuchar also visited the 2020 campaign trail stop-of-the-moment.

In one of the largest private-sector strikes in recent U.S. history, 31,000 workers had walked off the job at 241 Stop & Shop grocery stores across Massachusetts, Rhode Island, and Connecticut, protesting proposed cuts to their health care, pensions, and overtime pay. On Sunday, the workers received news that, pending a vote, New England’s top grocery store chain had conceded defeat.

Thanks to the strike, as well as the support of Warren and other public figures, Stop & Shop lost well over $2 million in sales. The tentative contract agreement contains wage increases for all workers and maintains former health care benefits that Stop & Shop tried to eliminate. It was the latest in a string of recent victories for organized labor, and could very well bode more in the future. “A victory at Stop & Shop emboldens workers across the public and private sector,” said Lane Windham, a labor expert at Georgetown University. “People get energized when they see other people standing up and winning. They can inspire more people to walk out in 2019.”

Politicians have noticed, too. In recent years, it would have been peculiar for multiple presidential candidates, even Democrats, to make public appearances with striking employees at a major retailer like Stop & Shop. After all, national union membership has dipped to record lows. But a seeming sea change has occurred in the labor movement. The United States is in the midst of its largest strike wave since the mid-1980s: In 2018, 485,000 workers went on strike, the highest number since 1986. The strike at Stop & Shop followed a wave of public school teachers’ strikes that began last spring in West Virginia and swept across the country, most recently to Los Angeles. Meanwhile, in early 2019, air traffic controllers, tired of working without pay, coordinated their own work stoppage by calling into work sick, helping end the longest government shutdown in U.S. history.

The Stop & Shop workers were likely emboldened by the public school strikes. “In the mind of most workers, there’s no distinction between the public and private sector,” said Jane McAlevey, a veteran labor organizer and the author of No Shortcuts: Organizing for Power in the New Gilded Age. “Stop & Shop workers saw other workers winning, and thought, ‘Damn it, me and my family have been taking it in the neck for the past 45 years, so why not go on strike?’”

Since Donald Trump entered office in 2017, corporate profits have surged, while workers’ take-home pay, in real terms, has steadily dropped, and employers have skimped on health care, pensions, and other benefits. “Workers are realizing today like they did coming off of the Great Depression that every kind of social good that ever existed in this country is coming under attack,” said McAlevey.

The Stop & Shop strikes, like the recent teacher strikes, were born of desperation. After months of negotiations, the grocery store’s Dutch parent company Ahold Delhaize insisted on slashing Sunday and holiday overtime pay for part-timers (75 percent of Stop & Shop workers are part-time) and increasing out-of-pocket health care expenses from $1,000 to $2,000 for an individual, among other unwelcome changes.

“If we were to have let them do what they wanted to us, it would essentially be as bad as them taking our jobs,” said Adam Virga, a 26-year-old produce clerk at a Stop & Shop in East Lyme, Connecticut. Virga told me that the cuts would have bankrupted families that have multiple generations concurrently working at the grocery store, which is common at Stop & Shop. “We wouldn’t be able to survive with those changes,” he said. Virga began working at Stop & Shop nine years ago as a senior in high school; he earns $15.30 an hour.

On its website, Stop & Shop argued that the cuts were coming at a time of increased competition from non-union competitors like Whole Foods, Walmart, Costco, and Amazon. Allowing workers to keep their current health care arrangement, it argued, would pass on higher prices to consumers. “Today, the landscape has changed,” the company stated. “Now, our biggest New England competitors are large, heavily funded non-union stores that enjoy both much lower labor costs and access to low prices and great locations.”

The United Food and Commercial Workers (UFCW) union representing Stop & Shop workers disagreed, as did labor experts. “This is an immensely profitable company,” Jennifer Klein, a professor of history at Yale, told a New York radio station. “This is really about how we choose to distribute the wealth and profits generated by the company between workers and the company.” Stop & Shop reported $2 billion in profit in 2018 and received $217 million in corporate tax cuts in recent years.

“This is not a company in trouble,” a statement issued by the UFCW said. “At the same time they were demanding workers pay more for health care and lose Sunday and holiday pay, Ahold authorized $880 million in dividend payments to shareholders from 2017 to 2019.”

The workers also had the economy on their side. The low national unemployment rate, at 3.8 percent, gave them leverage over their employers, making it difficult for Stop & Shop to find replacement workers. “People are emboldened by a low unemployment rate,” said Windham, the labor expert from Georgetown. Stop & Shop began scouting for temp workers, otherwise known as “scabs,” months in anticipation of the strike. According to some reports, it posted ads in faraway states for new hires. Yet when workers walked off the job on April 11, many Stop & Shop locations could not find enough replacement workers to stay open. Shelves went unstocked, and produce grew moldy. At the same time, in solidarity with workers, shoppers did not cross picket lines, at a great cost to the company.

Thanks to its history of unionized manufacturing, New England remains one of the few regions favorably disposed toward unions in the United States. Rabbis warned their congregations ahead of Passover that it was “not kosher” to “purchase the products of oppressed labor.” A former NHL player was publicly shamed when he entered a Stop & Shop on April 16. (He later apologized on Twitter.) Stop & Shop parking lots were deserted except for occasional customers delivering sandwiches and pizzas to striking workers.

At the same time, support for strikes can be seen as part of a growing national movement, even in conservative states like Arizona and Oklahoma, where teachers’ strikes have occurred. “When people see social movements that work, they’re more likely to stand up for their own rights,” said Windham. A “victory at Stop & Shop emboldens workers across the public and private sector.”

Still, striking in this country is not easy. Each strike takes a herculean amount of coordination on the part of organizers and bravery on the part of workers. Years in advance of the Stop & Shop strike, union leaders had strategically organized for five Stop & Shop local union contracts to expire at the same time, a tactic known as “contract line-up”—one of the few remaining methods for staging a major private sector strike in 2019.

In the summer of 1981, President Ronald Reagan famously fired 11,000 striking air traffic controllers, an unprecedented move that reshaped how workers in the United States approach striking. Prior to Stop & Shop, the last major supermarket strike in the United States occurred in 2003, when 70,000 workers at 850 Albertson’s, Von’s, and Ralph’s supermarkets across southern California went on strike over cuts to their health care, at the time the longest work stoppage in U.S. history. The epic strike was widely recognized as a defeat for workers.

“Until recently a lot of union leaders have been hesitant to deploy the strike weapon. It takes a lot of risk and work,” said McAlevey. “But that era is coming to a crash ending. Like in the 1930s, workers are saying, ‘We’ve had enough. It’s time to strike again.’”

Lauren Kaori Gurley is a reporter-researcher at The New Republic.