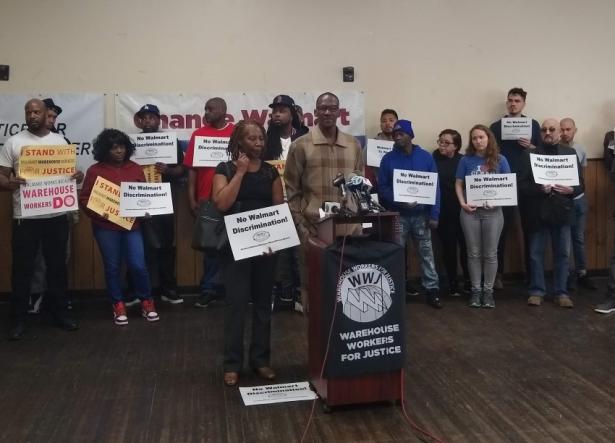 When Walmart announced in January that it was “in-sourcing” its Elwood, Illinois, distribution center, workers were cautiously optimistic.

Since it opened in 2006, the 3.4 million-square-foot warehouse has been operated by Schneider Logistics, a third-party contractor, which in turn hired workers through temp agencies. Walmart’s plan to absorb several of its outsourced warehouses nationwide meant an end to this web of subcontracting, which labor organizers charge is one of the company’s union-busting tactics.

The retail giant also announced that it would rehire as many current warehouse workers as possible, with raises in starting pay and benefits. Mark Balentine, who has performed quality assurance in the Elwood warehouse for three years, says he was offered and accepted the same position as a Walmart employee. It came with a pay bump from $16.35 an hour to $18.65.

“I was absolutely excited,” says Balentine.

But last month, just three weeks before Walmart was set to take over, Balentine says he received an e-mail informing him he was ineligible to work for the company based on the results of a criminal background check. He has a conviction for cocaine possession on his record that dates back to 1999.

Now 52, Balentine says he mentors youth leaving prison and is an ordained deacon at his Baptist church in Auburn-Gresham. He says the conviction hasn’t posed a problem for him in years.

Between 100 and 200 other African American workers may have been affected, according to Chris Williams, an attorney with the National Legal Advocacy Network, which filed the complaint with the Illinois Department of Human Rights and the U.S. Equal Employment Opportunity Commission (EEOC). A class-action suit could follow.

Walmart says its hiring practices exceed state and federal legal requirements and provide candidates with criminal records “a meaningful opportunity to put the record in context.”

“Retaining as many existing employees as possible has always been the goal of our transition at the Elwood distribution center, and we hired hundreds of those workers,” said spokesperson Kory Lundberg in a statement e-mailed to In These Times. “We understand the importance of providing second chances and our background checks include a thoughtful and transparent review process to help ensure everyone is treated fairly.”

But the complaint alleges that the company failed to perform any such individualized review of African American workers’ eligibility, which is part of guidance on employers’ use of criminal background checks issued by the EEOC in 2012.

Instead, according to Balentine, laid-off workers were given “$250 and a slice of pizza” and told they could reapply through the same process in 60 days.

Lundberg said that some candidates with criminal records “were offered a position after a personalized review of their offense,” but did not provide further details by press time.

According to the complaint, “other non-African employees with criminal backgrounds have been permitted to continue working at the Walmart distribution center.”

As many as 100 million Americans have some form of criminal record that can impact their access to jobs, housing and other public services. People with felony convictions, which are most likely to result in exclusion, represent an estimated 8 percent of the overall U.S. population and 33 percent of the African American male population.

A growing number of states and municipalities have attempted to address racially discriminatory hiring through “Ban the Box” laws that bar government employers or contractors from including questions about criminal background on job applications. Twelve states also bar private employers from doing so.

But racial discrimination in the temporary staffing industry is notoriously difficult to address. A series of lawsuits in Illinois and elsewhere have accused staffing agencies of discriminating against Black workers by, among other things, requiring them to submit to criminal background checks to which other workers are not subjected.

Exclusion of workers with a criminal record is “a huge issue in the warehouse industry,” says Roberto Jesus Clack, associate director of Warehouse Workers for Justice. The Illinois-based worker center holds monthly expungement workshops and organized meetings for the group of Elwood workers.

Elwood is located in Will County, which is home to more than 300 warehouses in total and a maze of temp agencies. When workers have raised complaints about wage theft and horrific working conditions—including during a landmark 2012 warehouse strike—a maze of subcontracting has made it difficult to hold either Walmart or Schneider Logistics responsible. While insourcing could represent “a step in the right direction,” says Clack, Walmart introducing new barriers to employment is instead a step backward.

“I'm looking out for the person behind me,” says Balentine. “The 17-year-old that's getting in trouble today and who sees what happens to me and then he decides, 'What's the point in changing? They aren't going to give me a chance anyway.'"

Rebecca Burns is an award-winning investigative reporter whose work has appeared in The Baffler, the Chicago Reader, The Intercept and other outlets. She is a contributing editor at In These Times. Follow her on Twitter @rejburns.