In this new book, Zambian-born economist Dambisa Moyo is concerned with the relationship between democracy and economic growth. Reviewer Donohoe considers whether the author sees any intrinsic value in democracy. 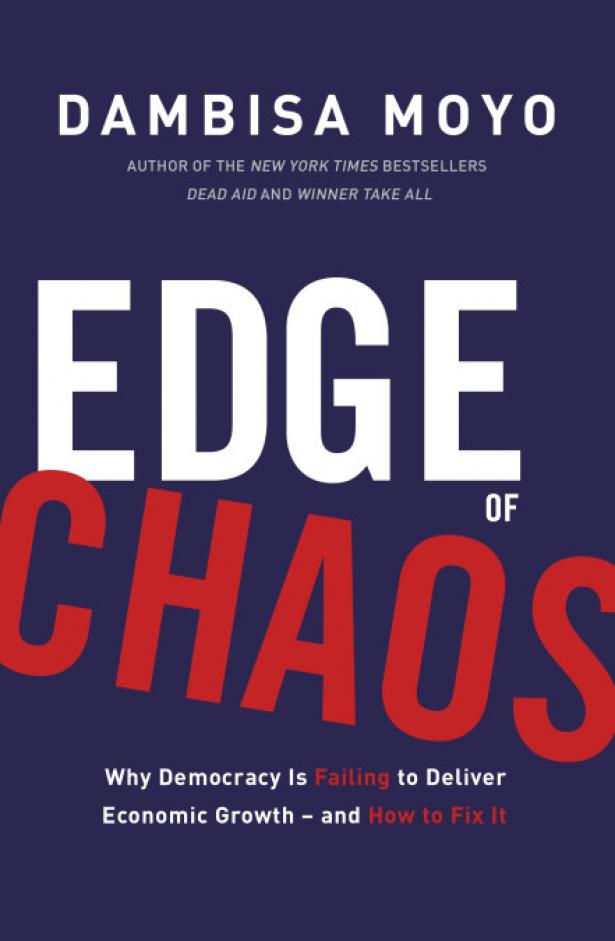 Edge of Chaos
Why Democracy Is Failing to Deliver Economic Growth-and How to Fix It
Dambisa Moyo
Basic Books
ISBN-13: 9780465097470

Who should govern a society? How should governors be selected? What powers should a government have and to what end should they be wielded?

The ancient Greek philosopher Plato was one of the first great thinkers to comprehensively grapple with these questions. His work, The Republic, written in 380BC, asked what political order could secure a just society. Plato warned of the dangers of popular democracy. Unfettered liberty can lead to anarchy. Democracy is vulnerable to demagoguery.

His famous solution was a government of philosophers. These souls of enlightenment would be trained in a variety of disciplines, from gymnastics to military service. Absolved of the potential corruption of private property, their only focus must be the common good.

The exploration of these ancient questions and the potential danger of some of their answers is a central theme of the latest work by the American economist Dambisa Moyo.

If the title of the book, Edge of Chaos, does not inspire cheer, then the subtitle, Why Democracy is Failing to Deliver Economic Growth – and How to Fix it, is even clearer about our discontents.

The opening chapters are bleak. Economies are failing to deliver inclusive and sustained income growth. Moyo is also damning of the state: “No matter what government does, it seems to fail.”

These reinforcing failures leads the author to contend that “the defining challenge of our time is to create solid and sustained economic growth that continues to meaningfully improve people’s lives”.

The barriers to inclusive growth are well described as “hurricane headwinds”. These include the impact of private and public debt, demographic changes, climate change and declining productivity.

The challenges are indeed great. But the author appears oblivious to any recent progress. The latest global economic outlook from the Organisation for Economic Cooperation and Development (OECD) acknowledges that global income per person is 10 per cent lower than it might have been if it had grown at the same pace as the two decades prior to the crisis.

However, growth within developed economies between 2016 and 2019 has matched and even exceeded growth between 1990 and 2007.

Similarly, unemployment in developed economies has now fallen below pre-crisis levels. America, for example, has created nearly 19 million jobs since the crisis.

Moyo would likely retort, if all is so rosy why are established political orders and parties now struggling? The author is correctly focusing on a central political question of our era.

This book is clear where the blames lies, “Political myopia is the central obstacle on the path of growth in advanced economies”. Governments will always “opt for short-term quick fixes that have the tendency to undermine long-term growth”.

The solutions proposed by the author aim to alleviate this myopia. They aim to propose a “blueprint for a new democracy”.

Some of the proposals are conventional. Restricting campaign contributions is an established features of some liberal democracies. But the echoes of Plato reverberate as Moyo maps out further changes. Candidates, for example, should have minimum qualifications for office.

These qualifications are distinctly technocratic, with a call for candidates “more likely to understand the sorts of policies that are needed in a modern economy than those conditioned on a diet of polls and political tactics”. The philosopher queen and king is back.

But if the echoes are familiar, so are the dangers. Critics of The Republic warned of the erosion of democracies and of the threat to civil liberties by the interests of an overly strong state.

The blueprint for change advocates that the impact of a citizens vote “could also be tied to one’s professional qualifications...(and)...employment status..and level of educational attainment, on the assumption that excelling in these domains makes one more likely to make well-informed choices in the voting booth”.

This combined with a proposal to extend electoral cycles and create an unspecified ability for policy makers to “bind their governments and successors more firmly to policies” casts doubt as to whether the author sees any intrinsic value in democracy. Inclusivity appears to be a valuable dimension of economic growth, but not of democracies.

This fear is deepened by a call for private corporations to take a more prominent role in public affairs and lead the implementation of these proposals.

The early chapters offer an incisive analysis of our economic challenges. The political solutions are every bit as dangerous as the chaos the author seeks to avert.

Paschal Donohoe TD is the Minister for Finance and Public Expenditure and Reform.