Barr Lied to Congress. That’s a Crime. No One is Above the Law

The Administration may not dictate the terms of a hearing...Every member of this Committee—Democrat and Republican alike—should understand the consequences when the executive branch tells us that they will simply ignore a lawful subpoena... 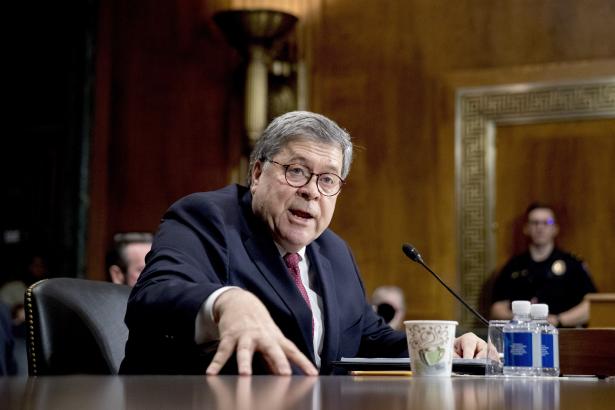 "We didn't choose not to have Mr. Barr come, he chose...We will defend the rights of the American people to know what's going on. We will defend the constitutional scheme of equal and coordinate branches of government. We will make sure that no president becomes a monarch." 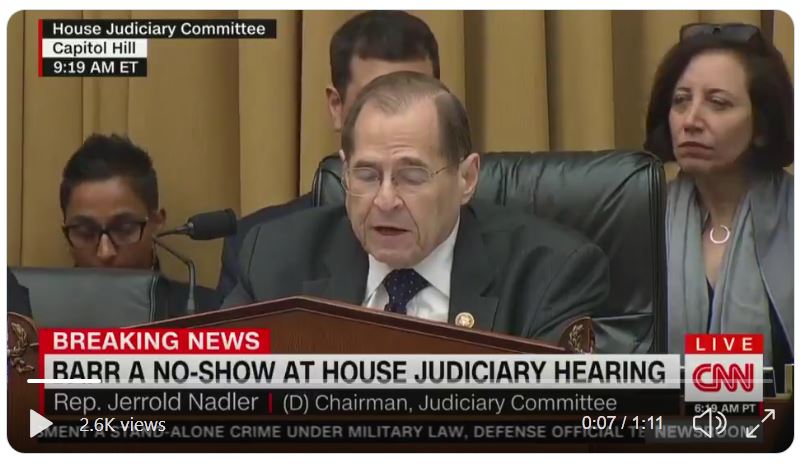 “Attorney General Barr has informed us that he will not appear today.  Although we worked to accommodate his concerns, he objects to the prospect of answering questions by staff counsel and to the possibility that we may go into executive session to discuss certain sensitive topics.

“Given the Attorney General’s lack of candor before other congressional committees, I believe my colleagues and I were right to insist on the extended questioning. To my knowledge, not even the Ranking Member was opposed to the idea of moving into closed session if necessary.

“But even if Democrats and Republicans disagree on the format of this hearing, we must come together to protect the integrity of this chamber.  The Administration may not dictate the terms of a hearing in this hearing room.

“The challenge we face is bigger than a single witness. Late last night, the Department of Justice wrote to inform us that they will ignore our subpoena for the unredacted Mueller report and the underlying evidence.

“They have made no meaningful attempt at accommodating that subpoena.  The letter references the Attorney General’s offer to twelve members of Congress—only twelve out of 535—to look behind some, but not all, of the redactions, provided that we agree not to discuss what we see with our colleagues and that we leave our notes behind at the Department of Justice.

“Every member of this Committee—Democrat and Republican alike—should understand the consequences when the executive branch tells us that they will simply ignore a lawful subpoena. If left unchecked, this act of obstruction will make it that much harder for us to hold the Executive Branch accountable for waste, fraud, and abuse, or to enact legislation to curb that kind of misconduct—no matter which party holds this chamber or the White House at a given moment.

“The challenge we face is also bigger than the Mueller report. If all we knew about President Trump were contained in the four corners of that report, there would be good reason to question his fitness for office.  But the report is not where the story ends.

“In the days since the Department of Justice released a redacted version of the report, President Trump has told Congress that he plans to fight all of our subpoenas.  The average person is not free to ignore a congressional subpoena—and neither is the President.

“His promise to obstruct our work extends far beyond his contacts with the Russian government and allegations of obstruction of justice.  The President has also prevented us from obtaining information about voting rights, ACA litigation, and his cruel family separation policy, among other matters.  The challenge we face is also not limited to this Committee.

“In recent weeks, Administration witnesses have simply failed to show for properly noticed depositions.  The Secretary of the Treasury continues to ignore his clear statutory obligation to produce the President’s tax returns.  The President’s private attorneys sued Chairman Cummings in his personal capacity in an attempt to block the release of certain financial documents.

“Ladies and gentlemen, the challenge we face is that the President of the United States wants desperately to prevent Congress—a coequal branch of government—from providing any check whatsoever to even his most reckless decisions.

“The challenge we face is that if we don’t stand up to him together, today, then we risk forever losing the power to stand up to any President in the future.

“The Attorney General of the United States is sworn to uphold the Constitution as our nation’s chief law enforcement officer.  He has an obligation to do everything in his power to warn the President of the damage he risks and the liability he assumes by directly threatening our system of checks and balances.

“Yes, we will continue to negotiate for access to the full report. And yes, we will have no choice but to move quickly to hold the Attorney General in contempt if he stalls or fails to negotiate in good faith. But the Attorney General must make a choice.  Every one of us must make the same choice.  That choice is now an obligation of our office.  The choice is simple: we can stand up to this President in defense of the country and the Constitution we love, or we can let the moment pass us by.

“History will judge us for how we face this challenge.  We will all be held accountable, one way or the other.  And if he does not provide this Committee with the information it demands and the respect that it deserves, Mr. Barr’s moment of accountability will come soon enough.”