They're scared that trying to remove him would backfire, but they're taking the wrong lessons from the past—and ignoring voters' wishes in the present 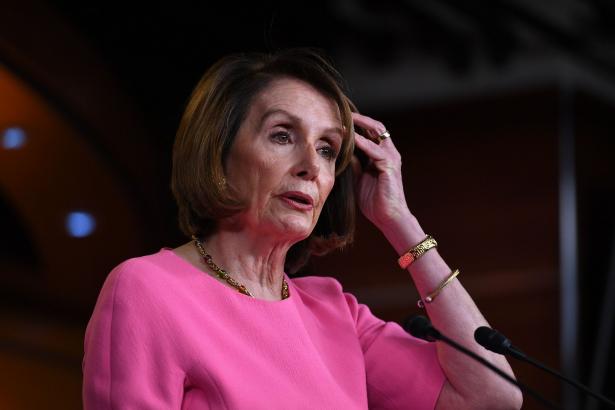 It’s ironic that one of the clearest explanations for why President Donald Trump should be impeached is coming from a member of his own party. Michigan Representative Justin Amash, a devout libertarian Republican, said this week that the Mueller report describes “impeachable crimes” on the president’s part. “Some of the president’s actions were inherently corrupt,” he wrote on Twitter on Thursday. “Other actions were corrupt—and therefore impeachable—because the president took them to serve his own interests.”

Amash is the first Republican lawmaker in either chamber to publicly draw this conclusion. That speaks volumes about his colleagues, who have largely echoed the president’s up-is-down refrain that the report’s damning findings are a “total exoneration” of him. But it says more about Speaker Nancy Pelosi and other top Democrats. Their strategy of describing Trump as a lawless threat to the republic while refusing to begin impeachment proceedings against him has gone from simply untenable to openly laughable.

Anti-impeachment Democrats offer multiple reasons not to begin the process. Some have argued that the American people aren’t yet supportive enough of impeachment to justify it. Others have warned that it could energize Trump’s base and alienate moderate voters, thereby paving the road to his re-election next year. Many of them have argued that impeachment is a futile gesture while Republicans control the Senate, where a two-thirds vote would be needed to remove Trump from office. But none of these excuses are persuasive. And when placed alongside Amash’s honorable stand against his own party’s leader, they smack of political cowardice.

This approach was defensible at first. Impeachment is a weighty process that should not be undertaken lightly, so it’s understandable that Democrats wanted to show some caution before launching it. They also understandably wanted to hold off while Mueller’s investigation was ongoing, in case he uncovered evidence that would be relevant for impeachment proceedings. With Mueller’s findings now public, those arguments for prudence have lost currency.

Pelosi’s opposition is particularly galling since she’s one of the president’s most vocal critics. “The president’s behavior in terms of his obstruction of justice, the things that he is doing, it’s very clear,” she told reporters on Thursday after Trump walked out of a White House meeting. “It’s in plain sight. It cannot be denied. Ignoring subpoenas, obstruction of justice. Yes, these could be impeachable offenses.” At the same time, the speaker is working tirelessly behind the scenes to quell members of her party who want the House to take more decisive action.

This refusal to wield power is symptomatic of a deeper malaise within a certain generation of Democratic leaders, as my colleague Alex Pareene noted last month. “Democratic leadership seemingly believes that the party can’t let its candidates campaign on promises to materially improve the lives of voters while also letting its elected officials carry out the responsibilities of their offices,” he concluded. “They also believe, deep in their bones, that the country is not on their side.”

Must-reads.
5 days a week.
Sign Up
for The New Republic

I’ve been skeptical in the past about the utility of impeaching Trump. Last April, I wrote that Bill Clinton’s impeachment in 1998—and his subsequent acquittal in 1999—showed how it could be a political minefield for a president’s foes. “The failed effort to remove Clinton in the 1990s suggests that to remove Trump today, Democrats would need the following: charges that are sufficiently grave to warrant removal, the clear support of the American public, enough senators willing to carry it out, and historically low presidential approval ratings,” I concluded at the time. “Only one of those factors is in the Democrats’ favor—for now.”

I no longer think the Clinton impeachment saga is as instructive. First, while Clinton’s approval ratings actually went up during his impeachment process, it’s hard to imagine Trump could pull off the same feat in this hyperpartisan age. Polls today generally show strong support for impeachment among Democratic voters, a modest but palpable opposition to it among independent voters, and near-universal opposition from Republicans. But that doesn’t necessarily translate into support for the president. Trump’s unusually stable—and unusually low—approval ratings indicate that most Americans have already formed their opinion of him, and they’re sticking with it.

I also no longer think the Senate’s composition should play a role in the House’s deliberations. In the impeachment process, the House functions like a grand jury. Its responsibility is to indict federal officials for wrongdoing when they believe there is enough evidence to support it. Senators, who act as a trial jury, may then decide that the charges are not justified, that the evidence isn’t sufficient for the official’s conviction, or that removal from office is too heavy a punishment. That is their prerogative. As Quinta Jurecic and Yoni Appelbaum have explained, the Senate’s potential unwillingness to finish the job does not free the House from its duty to begin it.

Other excuses also fall short. Adam Schiff, the normally combative Democratic chairman of the House Intelligence Committee, argued recently that if Trump is acquitted by the Senate, he would take it as “an adjudication that this conduct is not an impeachable offense.” This argument wrongly conflates the House’s power to impeach with the Senate’s power to convict; an impeachable offense, to paraphraseGerald Ford, is whatever the House decides it is. It is also short-sighted. If Trump would take his acquittal by the Senate as vindication of his behavior, what conclusion would he and future presidents draw from the House’s refusal to impeach him for it in the first place?

While Democrats have dwelled heavily on the drawbacks of impeachment, they’ve paid relatively little attention to the benefits of it. Trump is stonewalling their oversight efforts on virtually every front by arguing that the House lacks a “legitimate legislative purpose” for its inquiries. It’s hard to imagine a more legitimate or more legislative purpose for a subpoena than impeachment, and the courts would likely agree. Top Democrats are so obsessed with how Trump’s base would respond to impeachment that they neglect their own. The Democrats swept into power in last year’s midterms on a pledge to hold Trump to task. Will that energy hold if they keep telling liberal voters that accountability is just too hard?

Nothing could make Democrats look weaker than spending the next two years warning that Trump is an existential threat to American democracy, then telling voters that it’s not worth the trouble to impeach him. “I wish him and his family, his administration and staff would have an intervention for the good of the country,” Pelosi remarked on Thursday. The House of Representatives has the constitutional power to stage that intervention as well.

Matt Ford is a staff writer at The New Republic. @fordm