Mueller came as close as possible saying that he would have indicted Trump for obstruction of justice, if Justice Department policy allowed him to do so. "If we had confidence that the president clearly did not commit a crime, we would have said so. 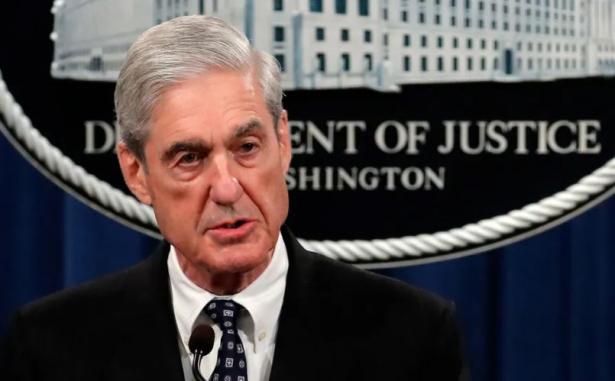 Special counsel Robert Muller speaks at the Department of Justice about the Russia investigation., AP Photo/Carolyn Kaster // The Nation

Robert Mueller Just Told Congress To Do Its Damn Job

Independent counsel Robert Mueller finally faced the cameras Wednesday morning. In his quiet way, Mueller’s message could not be any louder: He couldn’t indict the president, but he suggested Congress should investigate the many instances of likely obstruction of justice by President Trump outlined in his 445-page report—and that Congress has the power to find a president guilty of “wrongdoing.”

Mueller came as close as possible to saying that he would have indicted Trump for obstruction of justice, if Justice Department policy allowed him to do so. “Charging the president with a crime was not an option we could consider,” he said. But then he delivered the most important information in his 10-minute statement: “If we had confidence the president clearly did not commit a crime, we would have said so. We did not.”

Respected intelligence analyst Marcy Wheeler tweeted immediately: “Shorter Mueller: That was an impeachment referral, damnit, now act on it.” Presidential candidates Kamala Harris and Elizabeth Warren both used the same “impeachment referral” language. May all the 2020 Democrats join in, and soon.

Significantly, while Mueller made it clear he’d rather not testify before Congress, he did not say he would refuse to do so, if asked. “Any testimony would not go beyond our report. The work speaks for itself. I would not provide any information that is not in the report.”

While that might sound disappointing, it isn’t. Having Mueller delve into the details of a 445-page report (plus its footnotes) would be must-see TV. Just imagine Mueller being asked by the House Judiciary Committee to narrate the more shocking details of his investigation.

Here’s an example: Let Mueller run down his attempts to confirm whether and how President Trump ordered White House Counsel Don McGahn to fire Mueller, and then to cover up the fact that he ordered McGahn to fire Mueller. I would also enjoy hearing him explain that he didn’t charge, say, Donald Trump Jr. or anyone else involved in that sketchy June 2016 meeting with Russian representatives at Trump Tower—the one where the Russians dangled dirt on Hillary Clinton, and young Don said via e-mail he “loved” the idea—apparently because it wasn’t clear poor dumb Donnie knew he might be breaking the law by taking such a meeting.

Mueller also scorched the notion that his report found “no collusion” between Trump and the Russians trying to help his campaign, as the president and his team repeatedly screech. The independent counsel said there was “insufficient evidence” to charge collusion, which is very different. I would also enjoy hearing Mueller tell Congress part of why they had “insufficient evidence”: that Steve Bannon, Rick Gates, and Erik Prince either erased or somehow “lost” e-mails, texts, Whatsapp conversations and other communications about their interactions with Russian officials during the campaign and the transition period, as his report reveals. #ButHerEmails.

It took me an hour to recognize this possibly interesting point: Mueller said: “When a subject of an investigation obstructs that investigation or lies to investigators, it strikes at the core of the government’s effort to find the truth and hold wrongdoers accountable.” Not “If a subject…” Maybe that doesn’t matter. But… well, the word “if” was certainly available.

Mueller closed by making two very powerful points. For one, he thanked the lawyers and FBI agents who worked on his investigation, praising them for being “fair and independent” and for acting with “the highest integrity.” At a time when Attorney General William Barr—whom Mueller took pains not to criticize—wants to investigate these investigators, Mueller made a strong stand on behalf of their professionalism and decency.

Second, Mueller chose to end his statement with the finding the president apparently will not accept: “There were multiple, systematic attempts to interfere in the 2016 election.” He clearly doesn’t believe American leaders are taking that seriously enough, and I agree with him.

This is a bad day for Donald Trump. But it’s also a tough day for House Speaker Nancy Pelosi, and any other Democratic leader who is trying to slow-walk an impeachment inquiry. In the long relay of justice, Robert Mueller just handed you the baton. Run with it. Today.

[Joan Walsh, The Nation’s national-affairs correspondent, is the author of What’s the Matter With White People? Finding Our Way in the Next America.]

You said that your investigation’s work “speaks for itself.” It doesn’t.

It probably hasn’t escaped your attention (in my mind, nothingescapes your attention) that I play a version of you on “Saturday Night Live.” As “Robert Mueller,” my character is intimidating because he is so honest and upright. I do it for comic effect — that’s the intention anyway — but there’s also a lot of truth to it. To put it another way — it’s good-natured fun, but not entirely good-natured.

There’s a level of satire, directed at the current administration. To be fair, not everyone appreciates the humor. The president has tweetedthat there’s “nothing funny about tired ‘Saturday Night Live’” and that it’s “very unfair and should be looked into,” even “tested in courts,” and “this is the real collusion!” Though what or with whom the show would be colluding is unclear. But then I don’t have to tell you about problems with the term “collusion.” You barely mention the word in your report, and then only to explain why you’re not using it. That could be a punch line on “Saturday Night Live.”

As I prepared for my role on the show, I got to know you a lot better. I read about your lifetime devotion to public service and your respect for the rule of law. I watched how you presided over the special counsel’s office apparently without leaks. And you never wavered, even in the face of regular vicious attacks from the president and his surrogates.

While I and so many Americans have admired your quiet, confident, dignified response in ignoring that assault, it allowed the administration to use its own voice to control the narrative. And those voices are so loud and so persistent that they beat even reasonable people into submission. The loudest, most persistent voice belongs to the president himself, and under most circumstances, we want to believe our president.

There’s a lot of speculation about the president being tone-deaf to facts, but there’s not much disagreement about the tone. Whether you take delight in it as his loyal supporters do or you’re the unfortunate target of his angry rhetoric, the hostile way he expresses himself registers with everyone. Nor is there much credible disagreement that the president treats lies, exaggerations and bullying as everyday weapons in his communication toolbox. These onslaughts of rhetoric aimed at his opposition mostly leave his antagonists sputtering in response, but I don’t think an in-kind response will be very effective either.

Say what you will about the president — and I have — when it comes to that lying, exaggerating, bullying thing, no one can touch him. He has set up a world where it seems as if those disapproving of him can effectively challenge him only by becoming just like him. He’s bringing down the level of the entire playing field.

And here, Mr. Mueller, is where you come in — where you need to come in. In your news conference, you said that your investigation’s work “speaks for itself.” It doesn’t. It may speak for itself to lawyers and lawmakers who have the patience and obligation to read through the more than 400 pages of carefully chosen words and nuanced conclusions (with all due respect, as good a read as it is, you’re no Stephen King).

You’ve characterized the report as your testimony, but you wouldn’t accept that reason from anyone your office interviewed. Additional information and illumination emerge from responses to questions. I know you’re as uncomfortable in the spotlight as the president is out of it. I know you don’t want to become part of the political spectacle surrounding Russia’s crimes and your report on them. I know you will, however reluctantly, testify before Congress if called, because you respect the system and follow the rules, and I understand why you’d want to do it away from the public glare.

But the country needs to hear your voice. Your actual voice. And not just because you don’t want them to think that your actual voice sounds like Robert De Niro reading from cue cards, but because this is the report your country asked you to do, and now you must give it authority and clarity without, if I may use the term, obstruction.

We’ve learned our lesson about what can happen to the perception of your work when interpreted in rabid tweets by the president, dissected by pundits all over the map, trumpeted in bizarre terms by the president’s absurd personal lawyer and distorted by the attorney general.

And if, in fact, you have nothing further to say about the investigation, for your public testimony, you could just read from the report in response to questions from members of Congress. Your life has been a shining example of bravely and selflessly doing things for the good of our country. I urge you to leave your comfort zone and do that again.

You are the voice of the Mueller report. Let the country hear that voice.