Make No Mistake: Trump Is Freaked About Impeachment

As the number of House members calling for impeachment swelled to 50 by some news accounts, Trump began losing it 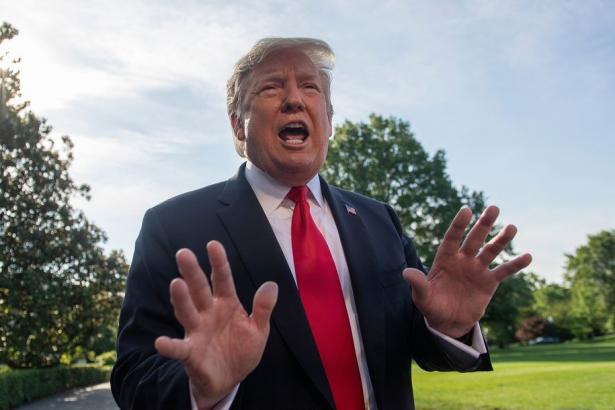 For months, Donald Trump has been practically daring congressional Democrats to impeach him by blocking every single one of their investigatory efforts. At the same time, many journalists have reported that Trump and his White House were all in for impeachment, believing that it would give Trump a political boost in 2020.

Well, that theory was blown to smithereens this week, one day after Robert Mueller's eight-minute resignation statement urging Americans to take a second look at Russia's cyberattack on the U.S. and Trump's obstruction of justice. As the number of House members calling for impeachment swelled to 50 by some news accounts, Trump began losing it. Thursday morning, Trump blasted out a tweet admitting that Russia helped him "get elected," a concession he has rejected at every turn. Minutes later, Trump’s staff sent him out to the TV cameras so he could deny that Russia played any part whatsoever in his election. "You know who got me elected? I got me elected," Trump asserted, rejecting the claim his other half had made on Twitter just moments earlier.

But when President Bone Spurs demonstrated his true courage—his temperamental mettle, so to speak—was when he was asked if he thought he would be impeached. After falsely suggesting "the courts" would never allow it, Trump expressed his outright revulsion at the prospect.

"To me, it's a dirty word, the word 'impeach,'" Trump explained. "It's a dirty, filthy, disgusting word, and it had nothing to do with me." Got that? It's revolting, gross, loathsome. And Trump can't ever imagine being slimed by such a nasty, objectionable, vulgar process.

Mueller gave one eight-minute statement this week. Less than 24 hours later, faced with the growing realization that the impeachment he’s been agitating for just might run him over like a Mack Truck, Trump is demonstrating the epic valor he has exhibited throughout his entire life. Just imagine what a full day of Mueller's testimony could do.

Watch Trump freak out below.

"I don't see how. They can because they're possibly allowed ... I can't imagine the courts allowing it," Trump says when asked if he will be impeached.

"To me, it's a dirty word, the word 'impeach.' It's a dirty, filthy, disgusting word," he adds https://t.co/WOh4gpeHpt pic.twitter.com/9gNJtK9ijN