“The child mortality rate here dropped to 7 percent from 17 percent in five years thanks to Mais Médicos,” said Dr. Dalva. “I told people to think about that before they voted.” 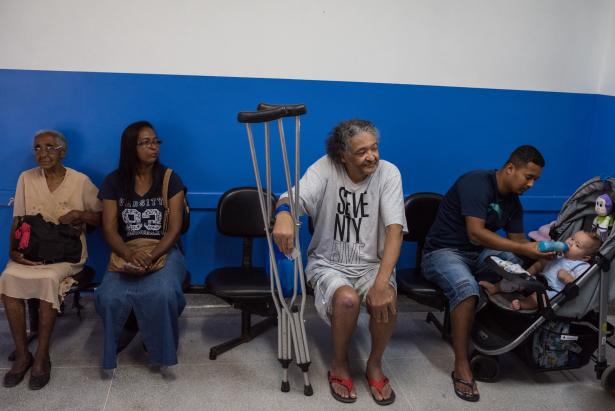 Patients waiting to see a doctor at a clinic in Embu-Guaçu. “Now we end up doing triage all day,” said Erica Toledo, the head nurse at the Jardim Campestre clinic, Maira Erlich for The New York Times

EMBU-GUAÇU, Brazil — The shiny plastic chairs all sat empty in a public health clinic, and the patients who staggered in were told to come back Thursday — the only day of the week now when a doctor is there.

This small Brazilian city, Embu-Guaçu, home to 70,000 people, recently lost eight of its 18 public-sector doctors, a devastating loss for the city’s network of free clinics, forcing hard choices about who gets care and when.

“It’s heartbreaking,” said Fernanda Kimura, a doctor who coordinates the assignment of physicians to the clinics for the local health department. “Like choosing which child to feed.”

The sick and the injured turned away that day in a working-class neighborhood of Embu-Guaçu represent only a tiny fraction of the estimated 28 million people across Brazil whose access to health care has been sharply curtailed, according to the National Confederation of Municipalities, following a confrontation between Brazil’s new president, Jair Bolsonaro, and Cuba.

In November, Cuba announced it was recalling the 8,517 doctors it had deployed to poor and remote regions of Brazil, a response to the tough stance against Cuba that Mr. Bolsonaro had vowed to take when he was elected in October.

The abrupt departure of thousands of doctors has presented Mr. Bolsonaro with one of his first major policy challenges — and has tested his ability to deliver on a promise to find homegrown substitutions quickly.

“We are graduating, I am certain, around 20,000 doctors a year, and the trend is to increase that number,” Mr. Bolsonaro said in November. “We can solve this problem with these doctors.”

But six months into his presidential term, which started in January, Brazil is struggling to replace the departed Cuban doctors with Brazilian ones: 3,847 public-sector medical positions in almost 3,000 municipalities remained unfilled as of April, according to the most recent figures available.

“In several states, health clinics and their patients don’t have doctors,” said Ligia Bahia, a professor at the Federal University of Rio de Janeiro. “It’s a step backward. It impedes early diagnoses, the monitoring of children, pregnancies and the continuation of treatments that were already underway.”

‘Our Cuban brothers will be freed’

During his campaign for the presidency, Mr. Bolsonaro, a right-wing populist, committed to making major changes to the Mais Médicos program, an initiative begun in 2013 when a leftist government was in power. The program sent doctors into Brazil’s small towns, indigenous villages and violent, low-income urban neighborhoods.

About half of the Mais Médicos doctors were from Cuba, and they were deployed to 34 remote indigenous villages and the poorer quarters of more than 4,000 towns and cities, places that established Brazilian physicians largely shun.

“The willingness of Cuban doctors to work in difficult conditions became a cornerstone of the public health system,” said Ms. Bahia, the professor.

Brazil paid millions of dollars a month to Cuba for the doctors, making them a vital export for the island’s coffers. But most of the money went directly to Cuba’s Communist government, an arrangement Mr. Bolsonaro warned he would change. 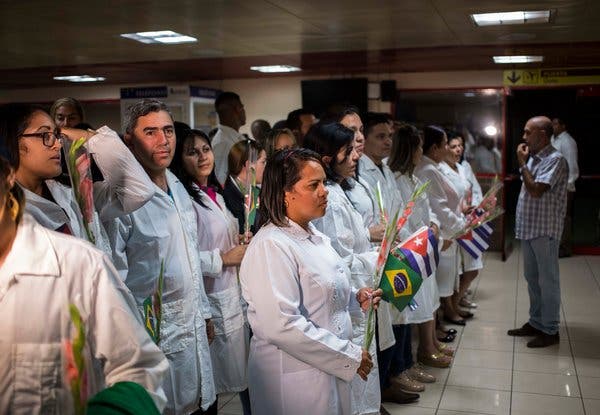 A group of Cuban doctors who returned to Cuba in November waiting to meet the island’s president, Miguel Diaz-Canel. CreditDesmond Boylan/Associated Press

Cuban doctors have long complained about getting only a small cutof the money for their work, and Mr. Bolsonaro said they would have to be allowed to keep their entire salaries and to bring their families with them to Brazil. They would also have to pass equivalency exams to prove their qualifications.

“Our Cuban brothers will be freed,” Mr. Bolsonaro said in an official campaign proposal presented to electoral authorities. “Their families will be allowed to migrate to Brazil. And, if they pass the revalidation, they will begin to receive the entire amount that was being robbed by the Cuban dictators!”

Two weeks after Mr. Bolsonaro won the presidency in October, Cuba ordered all its doctors out.

Access to free health care is a right under Brazilian law, and Mais Médicos was enacted in 2013 by President Dilma Rousseff in a bid to provide medical care to communities that were not being served by the public health system. Through a network of free clinics, the program provided 60 million Brazilians with access to a family doctor in their community for the first time.

In the first four years of Mais Médicos, the percentage of Brazilians receiving primary care rose to 70 percent from 59.6 percent, according to a report by the Pan-American Health Organization, which coordinated Cuba’s participation in the program.

The withdrawal of Cuban doctors could reverse that trend, with the consequences especially severe for those under 5, potentially leading to the deaths of up to 37,000 young children by 2030, warned Dr. Gabriel Vivas, an official with the Pan-American Health Organization.

In February, it looked as if Mr. Bolsonaro would fulfill his promise: the national Health Ministry announced that all of the positions left vacant by Cuba’s withdrawal had been filled with Brazilian doctors. But by April, thousands of the new recruits had either quit or failed to show up for work in the first place.

More than 2,000 Cuban doctors have chosen to remain in Brazil, defying the call to return home. But with the special arrangement with Cuba terminated, they are now ineligible to practice medicine until they pass an exam — which the Brazilian government has not offered since 2017 and for which the Health Ministry has set no date.

Luiz Henrique Mandetta, Brazil’s health minister, said the new government was working on a bill to ensure the goals of Mais Médicos were achieved and the doctors replaced.

“Even if the program has various problems, it has a positive side, which is, precisely, diminishing the inequality in health care neglect,” he said.

But Mr. Mandetta initially said the bill would be sent to Congress between April and May. Now, the ministry says it will be introduced by the end of June.

Karel Sánchez was one of four Cuban doctors sent to the remote region of Cachoeira do Arari in the Brazilian Amazon. He waited there for five months after his government ordered the withdrawal of all Cuban doctors, with the expectation that Mr. Bolsonaro would respect his campaign pledge to provide an exam so he could continue to work and receive his full salary. 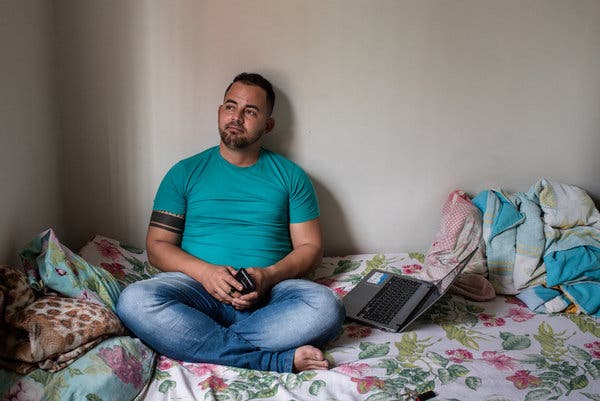 Dr. Karel Sánchez decided not to return to Cuba, expecting to be able to keep working in Brazil after taking a revalidation exam. That has not been the case.CreditMaira Erlich for The New York Times

“I was happy when Bolsonaro said he wouldn’t support a dictatorship,” Dr. Sánchez said.

In April, Dr. Sánchez gave up and moved to São Paulo, where he scrapes together money by selling homemade sweets and working as a baggage handler at an airport.

“Now he doesn’t talk about us at all, just silence,” Dr. Sánchez said.

‘I told people to think about that before they voted’

In Embu-Guaçu, Dr. Santa Cobas, the Cuban doctor who had been serving residents at the clinic now only open on Thursdays, was still nearby and eager to work.

But Dr. Cobas is unemployed, and the 4,000 people she once cared for don’t have access to a local doctor six days a week.

“Now we end up doing triage all day — deciding who needs to rush to another hospital, who gets to see the visiting doctor on Thursday and who will just have to wait,” said Erica Toledo, the head nurse at the clinic, Jardim Campestre, which was opened in 2015.

“Dr. Santa was here from the first day, and it was the first time people felt taken care of by their ‘own’ doctor,” Ms. Toledo said. “They really love her.”

The health secretary of Embu-Guaçu, Dr. Maria Dalva, said she was frustrated that 63 percent of the city had voted for Mr. Bolsonaro, despite his overt antipathy for Mais Médicos.

“The child mortality rate here dropped to 7 percent from 17 percent in five years thanks to Mais Médicos,” said Dr. Dalva. “I told people to think about that before they voted.”

A version of this article appears in print on June 12, 2019, on Page A1 of the New York edition with the headline: Now That Cuban Doctors Have Left, Brazil Turns Away Patients. Order Reprints | Today’s Paper | Subscribe