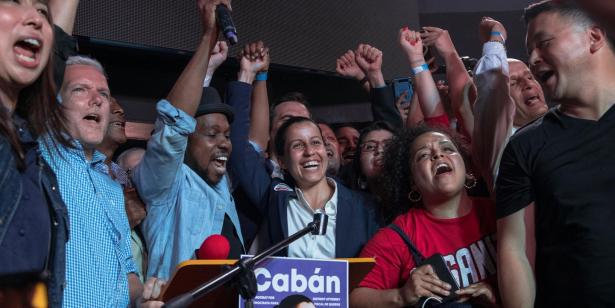 Tiffany Cabán seems poised to win in Tuesday’s Democratic primary in the Queens district attorney race — potentially giving a big victory to criminal justice reformers who want to end the war on drugs and mass incarceration.

The Queens race may seem like a small local news story. But it’s not — Queens has more people than 15 states and Washington, DC, so the race is a huge deal to a lot of people. And this is the kind of story that really matters for criminal justice reform, because district attorneys and other prosecutors hold tremendous power over the systems that oversee all incarceration in the US.

The race was too close to call as of early Wednesday afternoon. But Cabán declared victory late Tuesday night, telling the crowd at her watch party, “We did it, y’all.” New York Working Families Party Director Bill Lipton described the likely victory in sweeping terms: “Queens is turned upside down. Giants fall and empires crumble.”

With 99 percent of precincts reporting, Cabán, a 31-year-old public defender, led Melinda Katz, Queens borough president, by nearly 1,100 votes, or around 1.3 percentage points, in a field of six candidates (although seven remain on the ballot). About 3,400 absentee ballots remain to be counted. The final results may not be known until July 3, according to the New York Times.

A victory in the primary is expected to be a win in the overall district attorney race in Democrat-heavy Queens, which will be decided in November.

Cabán ran on a very progressive platform, focused on racial justice and criminal justice reform. She promised to end cash bail; decriminalize drugs, sex work, subway turnstile jumping, and other crimes of poverty; and set up an internal unit to review wrongful convictions. When I spoke to Cabán in May, she also talked about taking violent crimes seriously — speaking to the duality that minority communities face in that they often feel law enforcement simultaneously over-polices them for minor crimes but under-polices them for serious ones.

Katz advocated for some reforms, but generally didn’t go as far as the other candidates in the race. She only vowed to end prosecutions for marijuana possession and sex work — in contrast to the broader list from Cabán — and only took a stronger stance against cash bail toward the end of the campaign.

Prosecutor races don’t typically draw much media attention, but it’s exactly these types of elections that will help decide the future of mass incarceration. The great majority of incarceration occurs at the local and state level: The latest data by the US Bureau of Justice Statistics shows that nearly 88 percent of US inmates are held in state prisons.

Local prosecutors are very powerful in these systems. They effectively decide who goes to prison and who doesn’t, and how long someone will go to prison for — by unilaterally choosing what charges to bring against anyone.

Yet even as the movement for criminal justice reform has built up and continued around the nation, prosecutors have largely avoided the spotlight as some of the main drivers of mass incarceration. Cabán’s possible win, along with elections like Larry Krasner’s in Philadelphiaand Rachael Rollins’s in Boston, show that may be changing.

Typically, discussions of the criminal justice system focus on lawmakers, prisons, the police, and maybe judges. Rarely, however, is the most powerful actor in this system mentioned: the prosecutor.

Prosecutors are enormously powerful in the US criminal justice system, in large part because they are given so much discretion to prosecute however they see fit. For example, former Brooklyn District Attorney Kenneth Thompson in 2014 announced that he would no longer enforce low-level marijuana arrests.

Think about how this works: Pot was still illegal in New York state, but Brooklyn’s district attorney flat-out said that he would ignore an aspect of the law — and it was completely within his discretion to do so.

Courts and juries do, in theory, act as checks on prosecutors. But in practice, they don’t: More than 90 percent of criminal convictions are resolved through a plea agreement, so by and large prosecutors and defendants — not judges and juries — have almost all the say in the great majority of cases that result in incarceration or some other punishment.

John Pfaff, a criminal justice expert at Fordham University, has found evidence that prosecutors have been the key drivers of mass incarceration in the past couple of decades. Analyzing data from state judiciaries, he compared the number of crimes, arrests, and prosecutions from 1994 to 2008. He found that reported violent and property crime fell, and arrests for almost all crimes also fell. But one thing went up: the number of felony cases filed in court.

Pfaff provided a real-world example of this kind of dynamic in his book, Locked In: The True Causes of Mass Incarceration and How to Achieve Real Reform: “Take South Dakota, which in 2013 passed a reform bill that aimed to reduce prison populations. The law did lead to prison declines in 2014 and 2015, yet at the same time prosecutors responded by charging more people with generally low-level felonies, and over these two years total felony convictions rose by 25 percent.” In the long term, this could lead to even larger prison populations.

Now apply this story on a national scale. There is less crime compared to the 1990s. Police are making fewer arrests. Lawmakers are slowly reducing the length of prison sentences. Yet until 2010, incarceration rates had continued climbing nationwide — and, as Pfaff pointed out, the recent drop in incarceration would be much less pronounced if it wasn’t for court-ordered drops in California’s prison population. Prosecutors have been abetting more and more incarceration while other actors in the system have been pulling back.

Reformers are now grappling with the role of prosecutors

Despite the role of prosecutors in driving up mass incarceration, these actors have been mostly ignored in recent years. Pfaff noted: “No major piece of state-level reform legislation has directly challenged prosecutorial power (although some reforms do in fact impede it), and other than a few, generally local exceptions, their power is rarely a topic in the national debate over criminal justice reform.”

The elections of Cabán, Krasner, and others show this may be finally turning around, as criminal justice reformers like George Soros and the American Civil Liberties Union put more resources toward these local races.

“If we’re ever going to genuinely transform our nation’s criminal justice system, then we have to overhaul prosecutorial practices,” Udi Ofer of the ACLU previously told Politico. “If there’s one person in the system that can end mass incarceration tomorrow if they wanted to, it’s prosecutors.”

Reform, however, will take time. Cabán herself acknowledged this on Tuesday night, saying, “Transforming the system will not be easy. It will not happen overnight.” Reformers in other places have faced resistance from other actors in the system — from lawmakers to judges to police to lower-level prosecutors under them.

But it’s a start — not just because prosecutors are so powerful, but also because it’s at the local and state level where the real action in criminal justice happens.

In criminal justice, it’s local and state systems that matter

Most incarceration is done at the local and state level — giving reformers a reliable avenue to pursue reform even as President Donald Trump, who ran on a “tough on crime” platform (but contradicted himself and signed a criminal justice reform law), remains in office.

Consider the statistics: In the US, federal prisons house about 12 percent of the overall prison population. That is, to be sure, a significant number in such a big system. But it’s relatively small in the grand scheme of things, as this chart from the Prison Policy Initiative shows: 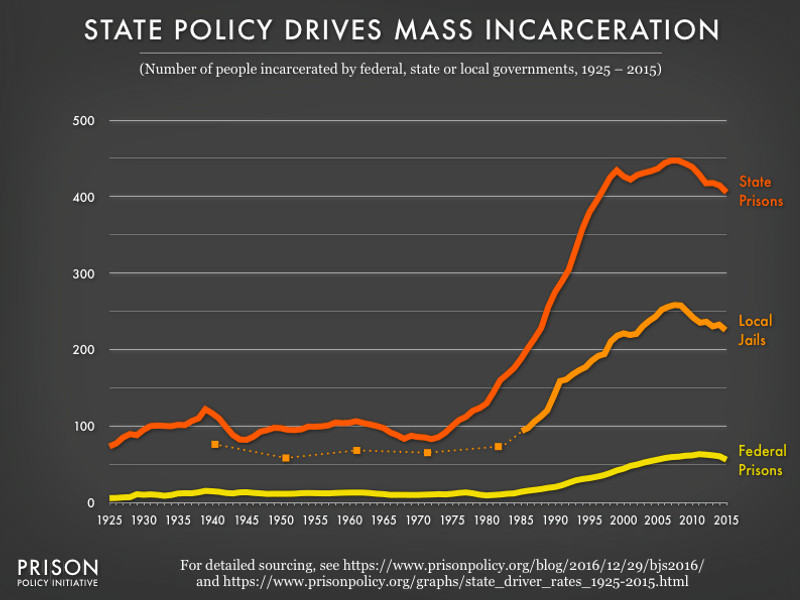 One way to think about this is what would happen if Trump used his pardon powers to their maximum potential — meaning he pardoned every single person in federal prison right now. That would push down America’s overall incarcerated population from about 2.1 million to about 1.9 million.

That would be a hefty reduction. But it also wouldn’t undo mass incarceration, as the US would still lead all but one country in incarceration: With an incarceration rate of around 600 per 100,000 people, only the small country of El Salvador would come ahead.

Similarly, almost all police work is done at the local and state level. There are about 18,000 law enforcement agencies in America — only a dozen or so of which are federal agencies.

While the federal government can incentivize states to adopt specific criminal justice policies, studies show that previous efforts, such as the 1994 federal crime law, had little impact. By and large, cities and states embrace federal incentives on criminal justice issues only if they actually want to adopt the policies being encouraged.

German Lopez is a senior correspondent with Vox and has written for Vox since it launched in 2014, with a focus on criminal justice, guns, and drugs. Lopez previously worked at CityBeat, a local newspaper in Cincinnati, covering politics and policy at the local and state level.