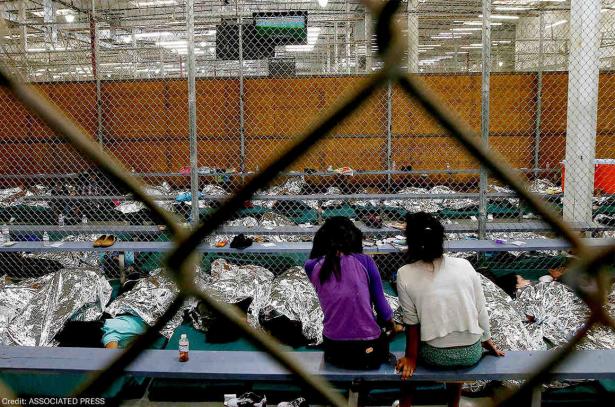 Two young girls watch a World Cup soccer match on a television from their holding area where hundreds of mostly Central American immigrant children are being processed and held , Associated Press

A year ago, America awoke to the shocking images of children being held in cages – children who had been stolen from their asylum-seeking parents at the border by an administration that had no plan to reunite them.

Now, on the anniversary of that nightmare, the Trump administration is demonstrating again what seems to be a deliberate strategy of unmitigated, unrelenting cruelty toward people of color who dare to seek asylum in our country.

Once again, children are at the center of this real-life horror show.

The New Yorker wrote on Saturday: “The conditions the lawyers found were shocking: flu and lice outbreaks were going untreated, and children were filthy, sleeping on cold floors, and taking care of one another because of the lack of attention from guards. Some of them had been in the facility for weeks.”

In one case, guards punished children – for losing a comb – by taking away their blankets and mats, forcing them to sleep directly on the concrete floor.

There were also teen mothers with infants at the facility, along with several toddlers who were being cared for by other children, some as young as 8. The Associated Press wrote: “Three girls told attorneys they were trying to take care of the 2-year-old boy, who had wet his pants and had no diaper and was wearing a mucus-smeared shirt when the legal team encountered him.”

A 14-year-old Guatemalan girl was found tending to two small girls. “I need comfort, too,” she said, according to the AP. “I am bigger than they are, but I am a child, too.”

Some children told the lawyers they weren’t getting enough food and had not bathed until shortly before the legal team arrived.

Two babies at the facility had to be rushed to the hospital, according to The Washington Post.

Many of these children have been held at the facility for weeks, long past the 72 hours allowed under a court agreement known as Flores. Most are from Central America and were separated from their parents or adult relatives at the border. Most have relatives in the United States, according to the lawyers who interviewed them.

It’s important to remember that the Clint facility is just one of many such detention facilities. Thousands of children are currently in Border Patrol custody – a direct result of Trump’s family separation policy.

A recent inspection of a facility in McAllen, Texas, found four incredibly sick toddlers. One girl was unresponsive with her eyes rolled into the back of her head. The children were hospitalized only after a group inspecting the facility forced Border Patrol officials to act.

This is the same facility where advocates found a teenage girl tending to a premature baby, USA Today reported. “You look at this baby and there is no question that this baby should be in a tube with a heart monitor,” the newspaper quoted an advocate. Instead, it was wrapped in a sweatshirt and tended to by a teenager in pigtails.

At least six migrant children have died since September after being taken into custody.

Vice President Mike Pence may have lamented the conditions as “totally unacceptable” during an appearance on “Face the Nation,” but he also quickly – and falsely – blamed Congress. Last week, a government lawyer argued in court that it was acceptable to deny children soap and toothbrushes.

What’s more, a week ago the president threatened to deport “millions” of migrants, starting within a week, if he didn’t get what he wants from Congress. Imagine the agony of families torn apart, children left without parents.

Trump has since backed off his threat, which apparently was a tactic to get Congress to enact new asylum restrictions.

What we’ve seen in the past week suggests that there is no limit to the pain that Trump and his top immigration henchman, Stephen Miller (who has ties to several anti-immigrant hate groups), are willing to inflict on the most helpless of people.

This depraved treatment of children must be stopped – or we may soon witness atrocities by this administration that we cannot yet imagine.