ULTRA-TOP-SECRET: For POTUS (DJT), Ivanka and Jared (JK) only 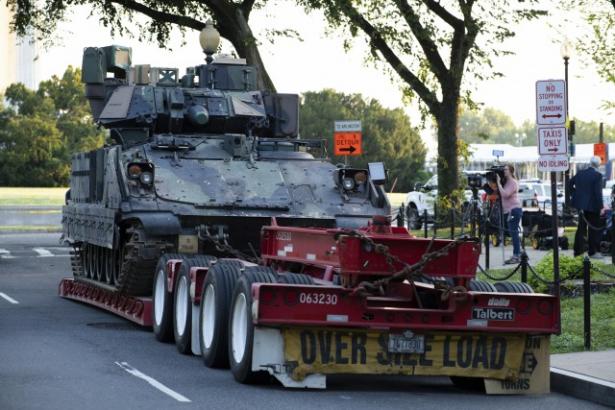 An M2 Bradley Infantry Fighting Vehicle near the Lincoln Memorial on the morning of July 3, 2019., Graeme Sloan/Sipa USA/AP Images

6:30 p.m. – President Trump walks down red carpet to address the crowd assembled before Lincoln Memorial. Choral accompaniment: “Battle Hymn of the Republic.” (Note: Opening line, “Mine eyes have seen the glory of the coming of the Lord,”  should be sung and then substituted for lines two and three as well; the lines have roughly the same number of syllables.)

6:35 – President welcomes crowd and promises attendees and those watching at home “a very good time—very good,” urges them to stay tuned for upcoming retail bargain. He voices special welcome to those in the designated VIP section, quotes line from the Declaration of Independence, “We hold these truths to be self-evident that all men are created equal,” and shakes head ruefully to laughter, applause from VIPs.

6:38 – President quotes line from Martin Luther King Jr.’s Lincoln Memorial speech—that people should be judged “not by the color of their skin,” with rest of line altered to conclude, “but by the color of their money.” More laughter. (Note: Do we need electronic sign flashing words “Laughter” and “Applause” visible only to VIP Section?) (Note: If we’ve screened them right, they’ll get it! – DJT.)

6:40 – Tanks begin crossing the Potomac on the Memorial Bridge, just behind the Lincoln Memorial. (Note: Army Corps of Engineers estimates 55 percent chance of bridge buckling. If bridge buckles under their weight, switch to Plan B, tanks moving from Dupont Circle.)

6:45 – President introduces surprise guest, Kim Jong-un as “no-nonsense leader.” Kim hails Trump, quotes line from the Declaration that governments derive “their just powers from the consent of the governed,” to additional laughter.

6:47 – President annexes West Bank. (Note: Can I do this? Shouldn’t Bibi be the one? - DJT.) (Note: Pompeo says you can; eliminates the middle man; fulfills some Biblical prophecy – JK.)

7:08 – President announces price reductions on Trump steaks as a way to increase sales and farmers’ incomes—the retail bargain promised above. (Note: Brief fireworks display should accompany this.) (Note: This actually helps ranchers, not farmers, but no one should notice the difference.)

7:15 – President introduces Chinese President Xi Jinping, acknowledging national differences on trade but praising Xi’s anti-terrorist campaign against his nation’s Muslim population. Xi reads First Amendment section affirming freedom of religion; President and Xi burn First Amendment (brought to the Lincoln Memorial by tank from Smithsonian). [Note: Constitution is at National Archive, not Smithsonian – must relocate!] [Note: If entire Constitution catches fire during this segment, does that negate Constitution? ((Check with Attorney General Barr.)) If so, President switches to substitute speech, “We Start Anew,” hailing new Constitution’s omission of legislative and judicial branches. (Justice C. Thomas tells us this poses no legal problem.)] [On further consideration, President should simply assert burning of Constitution operationalizes new one, immediately after which Angels train tank muzzles on crowd.] [Note: Tank muzzles must be elevated so as not to threaten VIP section.]