The Hidden History of the Arnautoff Mural

...painting over the mural doesn’t redress the historical crime that the mural shows – if anything, it covers up the critique of it, a goal the McCarthyites and their committees were never able to achieve. 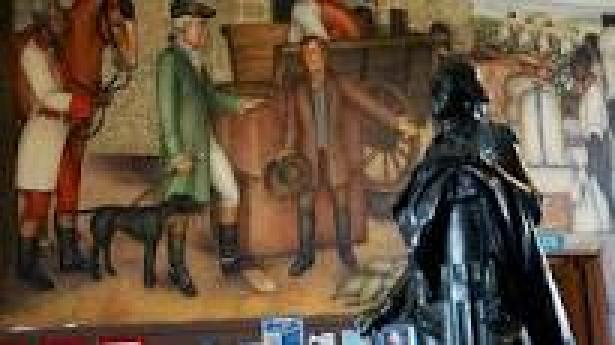 A statue of George Washington stands near a Washington High mural depicting historical racism that is to be painted over., Yalonda M. James/The Chronicle

I respect the feelings of the students who testified at the San Francisco Board of Education meeting about the mural at George Washington High School, and their desire to have their communities and histories treated in a respectful way. They deserve, not just respect, but solidarity in fighting the pervasive racism and exploitation in our society. The mural was painted in solidarity with that fight. I think it is a mistake, therefore, to interpret it as a symbol of colonialism, white supremacy and oppression.

The mural was created in 1936 by Victor Arnautoff, a Russian immigrant and a Communist, who painted it as a critique of the racist boosterism that was the way high school history was taught in that era (even when I was in high school in the early 60s). The 1930s were the years when the left and the Communist movement were strong in San Francisco. These were the years of the General Strike of 1934, which broke the color line on the docks – the reason the longshore union created in that strike, Local 10 of the ILWU, is a majority-African American union today. These were the years of the organization of the Chinese Workers Mutual Aid Association in San Francisco, many of whose members belonged to the Communist Party.

Arnautoff belonged to the Communist Party as well. In that party African American and white longshore and Chinese laundry and garment workers and red painters like Arnautoff would have undoubtedly known each other and talked about the politics they shared. Fighting racism and class exploitation, and supporting revolutionary movements against imperialism, was the common ground among those radicals – the basis of their politics. For an artist like Arnautoff, painting was therefore a political act, a responsibility to oppose racism and class exploitation in the art he produced.

The mural he painted in the high school was a critique of earlier murals produced for the Pan American Exposition, an imperialist celebration and world’s fair on Treasure Island, paid for by San Francisco’s wealthy elite. That “official” artwork showed California history as the advance of “civilization” triumphing over “savagery.”  The Admiral Dewey statue in Union Square, celebrating the colonization of the Philippines, was the same kind of art produced in that earlier era. An even uglier example is the art shown in the Forbidden Book, a book and exhibition of racist and imperialist cartoons collected by Abraham Ignacio and published a few years ago. This is what Arnautoff was reacting against. When the WPA, that is, the New Deal, began paying unemployed artists, it meant that artwork could be created that didn’t have to please the Crockers and other elite San Francisco families, and could therefore tell the truth about U.S. history. Arnautoff’s murals were a product of that short-lived political space.

“… when artists believed that art had to take sides with workers and oppressed people, and tell social truth.”

When the mural shows the grey hordes of settlers advancing past the body of a dead Native American, it was a powerful truth for that time, especially because these settlers are being urged onward by George Washington. The school was named for Washington, so Arnautoff’s message to students was to take a hard look at who he was.  Showing that the wealth is being produced by Black slaves, for the rich white colonial merchants who owned them, is telling the truth again. It doesn’t glorify slavery – it attacks it, and even more important, it shows who got rich from it. Washington was a plantation slave-owner.

The mural shows Native Americans with arms, which is also a historical truth – that many Native people fought against the American Revolution because they had suffered massacres by the settlers. In this depiction, Arnautoff goes beyond the radical murals of Anton Refregier in the Rincon Annex post office. Refregier shows native people doing the work for a California mission, with the Spanish padre who enslaved them in the background. That in itself contradicted the stereotype of the missions as happy places that brought European religion and culture to native people (for which Father Junipero Serra was recently beatified, when he should have been condemned).

But Arnautoff goes further. He shows native people as active resisters to colonization, in their war-dress, ready to battle the settlers. Such resistance was the key to survival. Indigenous historian Roxanne Dunbar Ortiz, speaking of this resistance in California, says, “Without this resistance, there would be no descendants of the California Native peoples of the area colonized by the Spanish.”

Exposing the resistance by both slaves and native people to the rebelling colonists in the American Revolutionary War is not just correcting history, but helps understand the present. Marxist historian Gerald Horne, in “The Counter Revolution of 1776”, charges, “Despite the alleged revolutionary and progressive impulse of 1776, the victors went on from there to crush indigenous polities, then moved overseas to do something similar in Hawaii, Cuba, and the Philippines, then unleashed its counter-revolutionary force in 20th-century Guatemala, Vietnam, Laos, Cambodia, Indonesia, Angola, South Africa, Iran, Grenada, Nicaragua, and other tortured sites too numerous to mention.”

Arnautoff painted a critique of George Washington because of that history of slavery and genocide, so you can imagine how much opposition there was to it. It was the art of social realism, the same approach to art by artists in China and the Soviet Union after those revolutions, when artists believed that art had to take sides with workers and oppressed people, and tell social truth. Many artists who created socially committed art in the U.S. were later blacklisted in the 1950s for what was then called “subversive” art. That kind of art was suppressed – you won’t find it in the San Francisco Museum of Modern Art.

Arnautoff belonged to the American Artists Congress, which was put on the Attorney General’s list of banned Communist/subversive organizations, and the San Francisco Artists and Writers Union. At the height of the Cold War in the 1950s he was called before the House Un-American Activities Committee. This was not long after the Committee sent ten screenwriters to prison for their radical politics, and the Hollywood blacklist denied work to many more. Arnautoff had a job teaching art at Stanford University and rightwing politicians tried to get him fired, which Stanford refused to do.  At the end of his life Arnautoff returned to the Soviet Union, where he continued his work as an artist, and died in Leningrad.

The school district, which is responsible for the mural, should have taught students about its politics – who it was defending and who it was attacking. If the students weren’t aware of this history, it’s in part because the school district didn’t do its job. Maybe it was afraid of the work’s radicalism, or simply didn’t know or understand the mural itself. The left in the Bay Area should also be self-critical for not having talked more about the mural and its message, helping to make students and their communities feel like they were being defended, rather than being alienated by the work, as so many said in their comments to the school board.

But painting over the mural doesn’t redress the historical crime that the mural shows – if anything, it covers up the critique of it, a goal the McCarthyites and their committees were never able to achieve.  Painting it over robs the students themselves – of the chance to discover and evaluate for themselves this history of struggle in the arts, of the chance to appreciate progressive art that tells the truth about our history, and of the chance to respond by making art and critiques of their own. If students are critical of Arnautoff himself, and point out blind spots he had, I’m sure he would have liked the idea.  He certainly didn’t consider his work some untouchable sacred object, but a tool to move forward the fight against racism and class exploitation, a fight in which he stood up for justice.

David Bacon is a Bay Area writer and photographer, and former union organizer. His latest book is In the Fields of the North / En los campos del norte (Colegio de la Frontera Norte/University of California Press, 2018).

Moderator Note:  Go to The Stansbury Forum original source https://stansburyforum.com/2019/06/28/the-hidden-history-of-the-arnauto… to read comments which continue this debate and discussion.