This World Cup has demonstrated on the largest possible stage the competing forms of patriotism that exist in the United States. This is also a team that openly, unapologetically, and joyfully projected its LGBTQ inclusivity and identity. 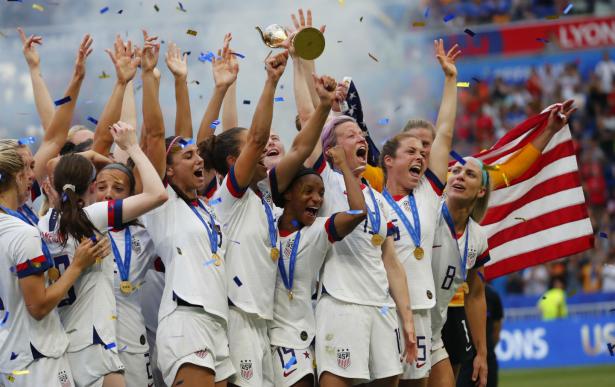 It was a victory that felt more like the encore following an already achieved standing ovation. After grueling World Cup quarter and semifinal matches against France and England, the United States women’s national soccer team defeated an overmatched Netherlands squad 2-0. A series of brilliant saves by Netherlands keeper Sari van Veenendaal kept the score from being even more lopsided.

It’s been a wild ride. Throughout the last month we have seen this become more than a team. Led by Most Valuable Player and Golden Boot winner Megan Rapinoe, they are more of a social movement that happens to play soccer—a fact that did not escape the watchful eye of Nike in its post–World Cup commercial. Having to do more than “just play soccer” and win the World Cup seems like an unfair burden to ask of any individual or team, but this rollicking group seemed to thrive on the pressure, on matching their words with deeds, on inspiring others to “talk and win.”

Throughout the tournament, team members were outspoken on and off the pitch—in goal celebrations and post-match press conferences alike. This was especially the case on the question of pay equity with the men’s team. In the immediate aftermath of the finals, a spokeswoman for the players issued the following statement: “These athletes generate more revenue and garner higher TV ratings but get paid less simply because they are women. It is time for the Federation to correct this disparity once and for all.”

This is undoubtedly true. Although given the fact that a recent study shows that the US women actually generate more revenue than the men, maybe they shouldn’t stop at mere equity.

This cause was so animated by their voices and play that after their finals victory, the crowd in the Stade de Lyon chanted, “Equal Pay! Equal Pay!”

After the final, Rapinoe said:

This is also a team that openly, unapologetically, and joyfully projected its LGBTQ inclusivity and identity. Five of the players are openly gay. Two—Ali Krieger and Ashlyn Harris—are engaged. When Rapinoe scored two goals in the victory over France, she said, “Go gays! You can’t win a championship without gays on your team—it’s never been done before, ever. That’s science, right there!”

This team also accomplished the impossible: they shut Donald Trump’s mouth. The Twitterer/predator in chief—a man who, in the words of defender Ali Krieger, doesn’t like any woman he cannot “control or grope”—was conspicuously silent about the USA’s supremacy on the global stage, summoning a single tweet hours after the conclusion of the match. He tried to challenge them early on for saying that they wouldn’t go to the White House and they—not to mention their partners—owned him time and again. He closed his mouth and sat in the corner.

If anything, this World Cup has demonstrated on the largest possible stage that we now have competing patriotisms existing in this country. There is the patriotism of the privileged Donald Trump; a patriotism that sits on the toilet at 3 am nursing petty grievances, all the jailed children in the world unable to make him happy. Then you have Megan “I’m not going to the fucking White House” Rapinoe, who has lived a hard-knock life and said,

I’m particularly and uniquely and very deeply American. If we want to talk about the ideals we stand for, the song and the anthem and what we are founded on, I think I am extremely American. For the detractors, I would have them look hard into what I am actually saying, the actions I am doing. Maybe you don’t agree with every single way I do it, and that can be discussed. I know I am not perfect. This country was founded on a lot of good ideals, but it was also founded on slavery. We just need to be really honest about that and be really open about talking about that…so we can reconcile that and hopefully move forward and make this country better for everyone.

One person thinks America was great in the old days, before there was such a thing as a US women’s national team, pining for a time when people like Megan Rapinoe had to live their lives in secret. The other is looking toward the future while being conscious of the sins of the past. One is surely miserable tonight in the wake of this remarkable victory. The other is smiling ear to ear, confident in the truth that she and her teammates not only talked the talk. They walked it, for all the world to see.

see related post:  Equal Pay in Sports - US Women’s Soccer and the Fight for Pay Equity
by Dave Zirin