Even with Acosta gone, Epstein remains a living reminder of the depraved milieu from which the president sprang, and of the corruption and misogyny that continue to swirl around him. 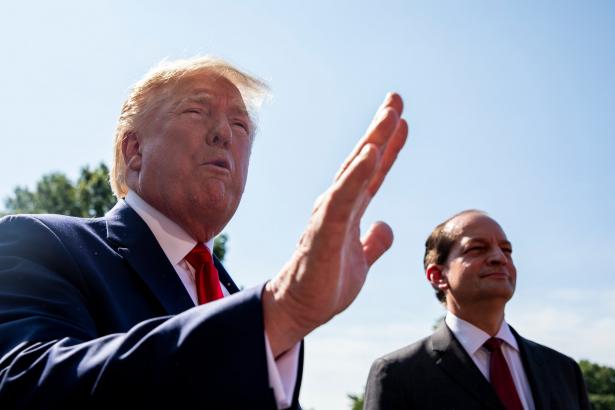 President Trump on Friday with Labor Secretary Alexander Acosta, who announced that he was resigning,Samuel Corum for The New York Times

On Monday, Donald Trump disinvited the then-British ambassador, Kim Darroch, from an official administration dinner with the emir of Qatar, because he was mad about leaked cables in which Darroch assessed the president as “insecure” and “incompetent.”

There was room at the dinner, however, for Trump’s friend Robert Kraft, owner of the New England Patriots, who was charged in a prostitution sting this year. Kraft was allegedly serviced at a massage parlor that had once been owned by Li Yang, known as Cindy, a regular at Trump’s club Mar-a-Lago. Yang is now the target of an F.B.I. inquiry into whether she funneled Chinese money into Trump’s political operation.

An ordinary president would not want to remind the world of the Kraft and Yang scandals at a time when Jeffrey Epstein’s arrest has hurled Trump’s other shady associations back into the limelight. Epstein, indicted on charges of abusing and trafficking underage girls, was a friend of Trump’s until the two had a falling out, reportedly over a failed business deal. The New York Times reported on a party Trump threw at Mar-a-Lago whose only guests were him, Epstein and around two dozen women “flown in to provide the entertainment.”

Epstein, of course, was also linked to the administration in another way. The president’s labor secretary, Alexander Acosta, was the United States attorney who oversaw a secret, obscenely lenient deal that let Epstein escape federal charges for sex crimes over a decade ago. On Friday, two days after a tendentious, self-serving news conference defending his handling of the Epstein case, Acosta finally resigned.

Even with Acosta gone, however, Epstein remains a living reminder of the depraved milieu from which the president sprang, and of the corruption and misogyny that continue to swirl around him. Trump has been only intermittently interested in distancing himself from that milieu. More often he has sought, whether through strategy or instinct, to normalize it.

[Listen to “The Argument” podcast every Thursday morning, with Ross Douthat, Michelle Goldberg and David Leonhardt.]

This weekend, Trump National Doral, one of the president’s Florida clubs, planned to host a fund-raiser allowing golfers to bid on strippers to serve as their caddies. Though the event was canceled when it attracted too much attention, it’s at once astounding and not surprising at all that it was approved in the first place.

In truth, a stripper auction is tame by the standard of gross Trump stories, since at least the women were willing. Your eyes would glaze over if I tried to list every Trump associate implicated in the beating or sexual coercion of women. Still, it’s worth reviewing a few lowlights, because it’s astonishing how quickly the most lurid misdeeds fade from memory, supplanted by new degradations.

Acosta, you’ll remember, got his job because Trump’s previous pick, Andrew Puzder, withdrew following the revelation that his ex-wife, pseudonymous and in disguise, had appeared on an Oprah episode about “High Class Battered Women.” (She later retracted her accusations.)

Steve Bannon, Trump’s former chief strategist, was once charged with domestic violence, battery and dissuading a witness. (The case was dropped when his former wife failed to appear in court.) After Bill Shine, a former co-president of Fox News, was forced from his job for his involvement in Fox’s sprawling sexual harassment scandals, Trump hired him.

The White House staff secretary Rob Porter resigned last year after it was revealed that both of his ex-wives had accused him of abuse. The White House speechwriter David Sorensen resigned after his ex-wife came forward with stories of his violence toward her.

Elliott Broidy, a major Trump fund-raiser who became the Republican National Committee deputy finance chairman, resigned last year amid news that he’d paid $1.6 million as hush money to a former playboy model, Shera Bechard, who said she’d had an abortion after he got her pregnant. (In a lawsuit, Bechard said Broidy had been violent.) The casino mogul Steve Wynn, whom Trump installed as the R.N.C.’s finance chairman, resigned amid accusations that he’d pressured his employees for sex. He remains a major Republican donor.

In 2017, Trump tapped the former chief executive of AccuWeather, Barry Myers, to head the National Oceanic and Atmospheric Administration. Then The Washington Post discovered a report from a Department of Labor investigation into Myers’s company, which found a culture of “widespread sexual harassment” that was “severe and pervasive.” The Senate hasn’t yet voted on Myers’s nomination, but the administration hasn’t withdrawn it.

And just this week, a senior military officer came forward to accuse Gen. John Hyten, Trump’s nominee to be the next vice chairman of the Joint Chiefs of Staff, of derailing her career when she turned down his sexual advances. “My life was ruined by this,” she told The Associated Press. (The Air Force reportedly cleared him of misconduct.)

Trump will sometimes jettison men accused of abuse when they become a public relations liability. But his first instinct is empathy, a sentiment he seems otherwise unfamiliar with. In May, he urged Roy Moore, the theocratic Alabama Senate candidate accused of preying on teenage girls, not to run again because he would lose, but added, “I have NOTHING against Roy Moore, and unlike many other Republican leaders, wanted him to win.” The president has expressed no sympathy for victims in the Epstein case, but has said he felt bad for Acosta.

Trump seems to understand, at least on a limbic level, that the effect of this cavalcade of scandal isn’t cumulative. Instead, each one eclipses the last, creating a sense of weary cynicism that makes shock impossible to sustain.

It was just three weeks ago that E. Jean Carroll, a well-known writer, accused Trump of what amounted to a violent rape in the mid-1990s, and two friends of hers confirmed that she’d told them about it at the time. In response, Trump essentially said she was too unattractive to rape — “No. 1, she’s not my type” — and claimed that he’d never met her. That was a provable lie; there’s a photograph of them together. It didn’t matter. The story drifted from the headlines within a few days.

Since Epstein’s arrest, many people have wondered how he was able to get away with his alleged crimes for so long, given all that’s publicly known about him. But we also know that the president boasts about sexually assaulting women, that over a dozen have accused him of various sorts of sexual misconduct, and one of them has accused him of rape. We know it, and we know we can’t do anything about it, so we live with it and grow numb. Maybe someday justice will come and a new generation will wonder how we tolerated behavior that was always right out in the open.

Michelle Goldberg has been an Opinion columnist since 2017. She is the author of several books about politics, religion and women’s rights, and was part of a team that won a Pulitzer Prize for public service in 2018 for reporting on workplace sexual harassment issues. @michelleinbklyn
Subscribe to Portside