Employers must never forget that it’s the workers who truly hold the fate of their businesses in their hands. If not treated properly, it’s entirely within their means to halt production or otherwise interrupt regular operations. 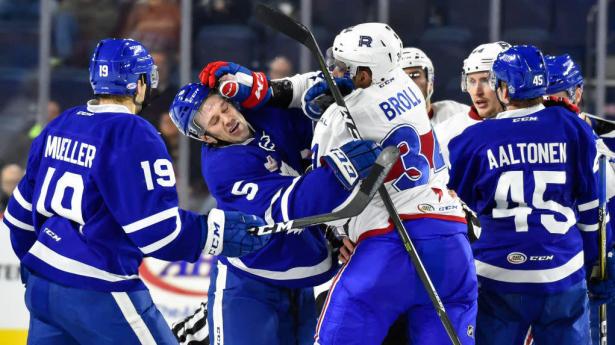 Employers must never forget that it’s the workers who truly hold the fate of their businesses in their hands. If not treated properly, it’s entirely within their means to halt production or otherwise interrupt regular operations. We’ve known this forever, but too often we forget to exercise our power when it’s necessary.

Here to serve you a reminder is someone working on the American Hockey League (AHL) app—a true labor hero who decided to hold the program hostage yesterday by composing push notifications about their workplace grievances.

Sports writer Sean Shapiro noticed the messages being sent out and, thankfully for all of us who have no professional obligation to have the AHL app installed, shared them on Twitter. Push notifications informed users that someone named Stewart Zimmel owed the writer $6,000 and that, “since I have no way to contact you,” blowing up Zimmel’s spot through the app was the best way to resolve the situation. Oh, and there was also a part about having a “workplace report [filed] against you for threatening to punch me in the throat nemours [sic] times.” Later messages retreading and reiterating these points make it very likely that all of this was sent by an Ian Bowman.

Later, the app began to show a screenshot of messages between Zimmel and Bowman. True to the original story, the prick boss warns his employee to “stay focused on what I ask you to stay focused on” and to “smarten up - or I will come out there and ‘punch you in the throat.’” He adds a smiley emoji for good measure.

Before long, the AHL’s Twitter manager wrote that “We’re aware of the issue and are working to resolve it quickly,” which suggests a behind-the-scenes panic that’s wonderful to imagine.

Curious onlookers quickly discovered that Stewart Zimmel—he of the withheld payment and good-natured threats to punch employees in the throat—is Chief Operating Officer of the development company behind the AHL app.

Before long, with that information hanging in the air, the AHL sent out a new, far less intriguing notification saying it had “worked with our app host to resolve today’s issue” and apologizing for the whole thing.

The AHL would probably like the story to end there, but the rest of us need to know whether Bowman’s gambit worked. Did he get paid his $6,000? Did he get to keep his job after all of this? Can anyone stop Stewart Zimmel from threatening to punch his employees in the goddamn throat?

Contributor, The A.V. Club. Reid's a writer and editor who has appeared at GQ, Playboy, and Paste. He also co-created and writes for videogame sites Bullet Points Monthly and Digital Love Child.