Viewing energy as a common-held resource, rather than a privately-owned commodity, directly links production to consumption and re-engages our liability as energy users. 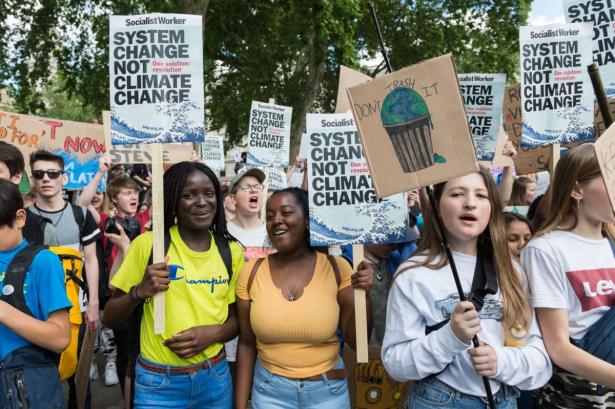 Viewing energy as a common-held resource, rather than a privately-owned commodity, directly links production to consumption and re-engages our liability as energy users., Wiktor Szymanowicz/NurPhoto via Getty Images

In 2019, only oil lobbyists and shabby orange politicians persist in denying the influence of human activities on the Earth’s climate. Scientific evidence is piling up and we know that we must change our ways. The concept of energy transition has become mainstream.

However, governments have remained remarkably motionless. They are so inactive that kids have started school strikes and demand climate justice in front of the United Nations’ Conference of Parties. They are so immobile that citizen groups actually sue their governments for their lack of climate action. And when governments attempt to do something, it is so unjust that people take to the streets even during the coldest months of the year, screaming, filled with rage and frustration.

Our leaders have forgotten that the poorer half of our societies should not have to clean up the mess produced by the richest half. That it should not be our kids cleaning up our mess.

Facing a lack of political will, an interesting and vivid grassroots movement has taken shape to reclaim our energy systems. From households to city politics, and even at the European level, there has been an unprecedented involvement from the public into energy and electricity matters. For example, in the shape of energy cooperatives.

According to the European Federation of renewable energy cooperatives, RESCOOP, there are at present some 1,250 energy communities in which a million people throughout Europe are involved. Through the RESCOOP federation, these groups actively lobby at a European level to bend the legislation towards promoting and supporting energy cooperatives.

This model of energy cooperativism originated in Germany in the late 1990s and was enabled by a set of disruptive laws supporting the production of renewable energy. This bill kick-started the German energy transition (dubbed “Energiewende”), which has become a landmark and is being widely copied.

The two main pillars were defined in the Feed-In Act of 2000: the priority of renewable sources to the grid and feed-in tariffs (fixed prices paid for renewable energy).

The particularity of this framework is that it has enabled small players to enter the game. Citizen cooperatives and households have especially benefited, because a fixed price for each kilowatt hour (KWH) could be sold back to the grid, which gave them more space to invest in new technologies.

From the late 1990s onwards, the number of cooperatives in Germany has grown exponentially, reaching 900 in 2019, representing the majority of energy cooperatives in Europe. It is a model that comes with many advantages. Let’s virtually visit one of these cooperatives together.

It is raining softly and the landscape is dissolved in the mist when we enter Feldheim after a one-hour drive from Berlin. Apart from a large blue sign at the entrance of the village, nothing distinguishes the Energieautarker Ortsteil Feldheim (“Self-Sustainable Village Feldheim”) from the other villages in Brandenburg: all have similar houses with their neat little front-gardens along a similar straight road.

There is a bit of wind, it is cold and nobody ventures outside, except for our guide, Herr Kappert, his hat pulled all the way down, who comes to greet us. He leads us to the brand-new visitor’s center. It is big and clean, and somehow reminds me of the over-dimensioned churches in small villages along the Camino de Santiago in France, designed to host the pilgrims on their journey.

Indeed, I feel like a pilgrim reaching a Mecca for community-based off-grid energy projects. Once pointed in the right direction, we see the big giants peering through the fog, all turned in the same direction and rotating out of phase.

Contrary to its bland appearance, Feldheim is very special. Its uniqueness does not lie in the fact that there is about one wind turbine for every three people here (47 wind turbines for 148 inhabitants) — that is actually quite common in Germany nowadays, especially in the former DDR. The special thing here is that the inhabitants are largely involved in the project.

At the turn of the century, Feldheim was just another post-communist village in Brandenburg: people were leaving, the school had closed down and unemployment was affecting more than 25 percent of the population. But in 1995, a joint venture between the villagers and a small local energy developer, EnergieQuelle GmbH, installed a first batch of four wind turbines.

The success of that operation soon led to the installation of another 40 wind turbines, a biogas factory, a solar park, a giant battery and a parallel electricity and heating grid. This meant that the village has since become self-sufficient in its energy needs. There are several other spill-over effects from these energy developments in Feldheim.

As we strolled through the village to go to the wind farm, I approached Mr. Kappert and asked him whether the price of the real-estate in the village has suffered from the installation of so many wind turbines. He looked at me a little puzzled, laughed and said: “No, not at all, why?” So I explained that people in the media often talk about the opposition from local populations to wind farms and the recurring argument of plummeted prices of real-estate next to large projects. Mr. Kappert said that the project is an asset to the village and that it has probably increased the value of houses. And there is a major difference: external, imposed projects versus internal, self-managed and self-designed projects.

In Feldheim, the project was developed in collaboration with the population over a period of more than 20 years and has been designed to fit the needs and specificities of the village. For instance, the fact that the local industry is mostly relying on agriculture rendered the installation of a biogas production unit (which enables the conversion of animals’ manure and land-crop waste into natural gas) desirable and efficient. This shows how important it is to determine the appropriate technology for a community.

As we chatted, Mr. Kappert told me that the success of the project had a snowball effect on the life in the village. The income generated by the wind farm could be reinvested in other local ventures, such as a company designing arrays for solar parks. This, together with the maintenance of the wind farm and the biogas unit, created jobs so that the employment rate is now virtually 100 percent in Feldheim.

How can such a model spill over to neighboring villages? What happens with families who do not have the financial means to get involved in the project, in which a sum of 1500 euros was required to enter the cooperative? These important questions regarding inclusiveness and reproducibility are not fully answered by the cooperative model and we must turn our sight to re-municipalization of electricity utilities.

Municipal Utilities and the Energy Commons

According to a recent report from the Right to Energy Coalition, poorer households in many European countries face moderate to extreme levels of fuel poverty. This means that these families can hardly access energy to cook and heat their houses. The report also shows that households spend an increasing proportion of their income on energy expenditure (which can reach up to 33 percent). Although affecting most strongly southern and eastern European countries, this problem is also seen in cities like London, where the government has issued a plan to tackle fuel poverty.

All over Europe, a movement to reclaim public services from the private sector is gaining traction. Municipal utilities are seen as a tool to control tariffs, steward the energy transition and fight energy poverty. And indeed, cities have a crucial role to play as they are accountable to all citizens and are thus by definition more inclusive than cooperatives. The re-municipalization movement is complex and involves a large range of interactions between local initiatives and governments, intrinsic motivations and level of achievement (i.e., from full purchase to public-private-partnerships).

An aspect of the energy transition which is often overlooked is the need to drastically reduce our consumption of energy (a decrease by 50 percent is planned in the German “Energiewende” plan). The cheapest and cleanest energy is the one which is not produced and not used: all power plants, even those harvesting renewable sources of energy, have large impacts on the environment (e.g., by using rare minerals for wind turbines).

Energy efficiency and conservation measures cannot be undertaken by for-profit energy providers, because they have an incentive to sell as much energy as possible. Municipal utilities, by effectively shifting energy from the commodities market to the commons, can help to manage the resource more efficiently and have a decisive role to play.

An example for this is provided by the Sustainable Energy Utility (SEU) in the American state of Delaware, which is a community-based institution aiming at designing and financing local energy projects. The idea is to consider the energy consumption of a community globally, with the primary aim being to save it: when energy is needed, the SEU should implement an appropriate renewable technology, and incorporate heat and transport systems in the design.

Although municipal energy utilities have a great potential in achieving a just transition towards cleaner energy, the question of governance is not always adequately tackled. In Hamburg for instance, a successful citizen campaign and referendum in 2013 compelled the city government to buy the energy (electricity, gas and heating) networks back from private operators.

Two publicly-owned companies are now operating the grids, but citizens are still seen as clients and have no decisionmaking power. The next step is therefore to combine the governance model of cooperatives with the inclusiveness of municipal utilities in order to implement a fully democratic and just energy transition.

In many places, privatization of the energy market led to the appropriation of productive land by large multinationals (think of solar farms in the Sahara to feed the European grid), with very little or no spillover for the local economy. This could be described as cases of enclosure of the commons and energy colonialism. Furthermore, the present “over-grazing” of our finite energy resources, which results from our “energy obesity”, questions the inter-generational liability: our right to access energy should be limited by the legacy that we will leave to our kids.

Relocating energy in the commons (by de-privatizing or re-municipalizing) would be a powerful way to address these questions, by linking production to consumption and re-engaging our liability as energy users. Finally, considering energy as a commons would allow to benefit from the creative power and experience of commoners to manage and share the resource.

The new book Our Commons: Political Ideas for a New Europe edited by Sophie Bloemen and Thomas de Groot of the Commons Network can be downloaded for free.

This is an excerpt of “Our Commons: Political Ideas for a New Europe” edited by Sophie Bloemen and Thomas de Groot.