We Are Here Because You Were There:*

Refugees at the US-Mexican Border

July 20, 2019 H Patricia Hynes Berkshire Eagle
Printer friendly
We Are Here Because You Were There:* Published July 20, 2019 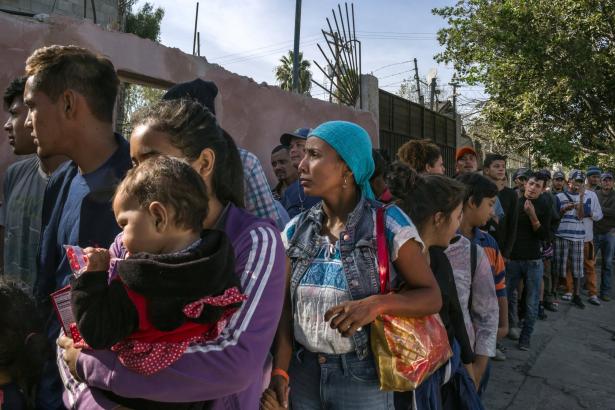 Melissa Guzmán, 33, center, from Copán in Honduras, waiting in line for food with other migrants outside a recently arranged shelter in Tijuana, Mexico, on Saturday., Mauricio Lima for The New York Times

Why would so many Guatemalans make the arduous journey to the US-Mexican border seeking refuge, knowing the hatred heaped on them by the Trump Administration? A short list of our long history of corporate exploitation and military aggression in that country might explain. In 1928 the American United Fruit Company (present-day Chiquita Banana International) instigated a massacre of thousands of Guatemalan workers who struck for better working conditions. Brigadier General Smedley Butler, who gained the highest rank and a host of medals for leading military interventions in Central America and the Caribbean in the 1920s (popularly known as the Banana Wars), put it bluntly. He confessed, in his iconoclastic book, “War Is a Racket,” to having been “a bully boy for American corporations,” making countries safe for U.S. capitalism.

In 1954 President Eisenhower ordered the overthrow of democratically elected President Jacobo Arbenz who had issued the Agrarian Reform Law, which redistributed land to some 500,000 landless indigenous peasants. Ten years of democracy in that country (1944-54) was gutted, and the US installed an authoritarian government to roll back agrarian and worker reforms and, thus, protect United Fruit’s land interests. Throughout the 1960s, 70s, and 80s Cold War era, the US backed coups and aided right-wing leaders with troops and weapons to repress left-leaning social movements, resulting in the deaths of hundreds of thousands of Guatemalans. One president we championed, Efrain Rios Montt, was convicted of genocide in 2013 for trying to eliminate Mayan peasants. The inequality and violence that we have fostered and aided forced those Guatemalans under attack, rendered landless and impoverished to leave and migrate north. They are here because we were there.

In 2009 reform-minded President Manuel Zelaya, who had raised minimum wage, built new schools, instituted school lunch programs and provided pensions for the elderly, was kidnapped by the Honduran military and flown out of the country to Costa Rica. (The general who led the coup was trained by the US Army at its School of the Americas, popularly known as the School of Assassins for the generous number of Latin American graduates who have instigated coups and tortured and murdered political opponents). The Obama Administration tacitly supported the 2009 coup and had an assisting role in preventing Zelaya’s return to Honduras. The US administration has continued to approve subsequent illegal presidents who have intimidated and violently suppressed rural and indigenous farmers’ land rights in favor of large agro-corporate land grabs. Over the past 10 years, police, military and hired militias have murdered thousands of indigenous activists, peasant leaders, journalists, human rights and union activists, opposition candidates and judges. By 2016, Honduras had the highest murder rate in the world.

Drug traffickers infiltrate the Honduran government “from top to bottom,” including the police and military according to historian, activist and author of The Long Honduran Night, Dana Frank. The brother of the current president, whom we back and support with US aid, was recently charged with trafficking multi-tons of cocaine headed to the US. He was assisted by national police (also funded by the US) and drug traffickers.

Meanwhile US Border Patrol agents have tear-gassed Honduran asylum seekers fleeing police, drug gang violence and the loss of their land. They have separated thousands Central American children from their families and dumped them into cold, crowded detention centers with filthy toilets and insufficient running water. They are here because we were there.

Over the last eight decades, US military support for right-wing coups and authoritarian candidates has strangled social movements for self-determination, worker rights and economic development in El Salvador. In 1932 the US and Britain, owners of large export-oriented coffee plantations, sent naval support to quell a peasant rebellion led by the communist Farabundo. What follows is a short list of our interventions in this country that have driven the displaced, impoverished and endangered to travel a trail of tears to our border.

In 1960 President Eisenhower, fearing a leftist government, facilitated a right-wing coup and openly opposed the holding of free elections. The same Cold War ideology drove President Reagan to provide generous military assistance and training in 1983 to the repressive military-led government in its civil war against a leftist front. Eighty thousand Salvadorans were killed in the 1980-1992 civil war, with the majority of civilian deaths caused by Salvadoran military and death squads. In the early 1990s some 200,000 Salvadorans were given Temporary Protected Status (TPS). However, their TPS was revoked in 2018 by President Trump, emblematic of his hostile and hate-mongering history toward the poor, displaced and endangered who arrive here because we were there.

Since 1890, the United States has intervened in Latin American elections, civil wars and revolutions at least 56 times according to historian and author Mark Becker, to bolster US corporations’ interests and eliminate democratically elected governments and leftist movements. In synch with this historical legacy, the Trump administration has enacted crippling economic sanctions, supported an attempted coup and threatened military action against the socialist government in Venezuela. (Imagine the same being done to us during our revolution for independence from Britain, our civil war, and any of our presidential elections). Adding fuel to his scorched earth policy, Trump’s proposed 2020 budget increases the military budget by 5% and decreases the State Department by 31% - a signal of our increasingly belligerent, non-negotiating role in the world.

Perhaps the only way to attract the well financed, educated and presumably white immigrants Trump seeks is to declare war on a Nordic country, hoping they will come because we are there.

Pat Hynes, a retired Professor of Environmental Health and environmental engineer, directs the Traprock Center for Peace and Justice in western Massachusetts.