Mueller Has Provided Congress With Everything It Needs to Impeach Trump

Now, Congress must act. Answers were in response to basic questions about attempts by the president and his aides to undermine his inquiry. This corrected the ongoing disinformation campaign conducted by Trump and his attorney general, William Barr.

July 25, 2019 John Nichols The Nation
Printer friendly
Mueller Has Provided Congress With Everything It Needs to Impeach Trump Published July 25, 2019 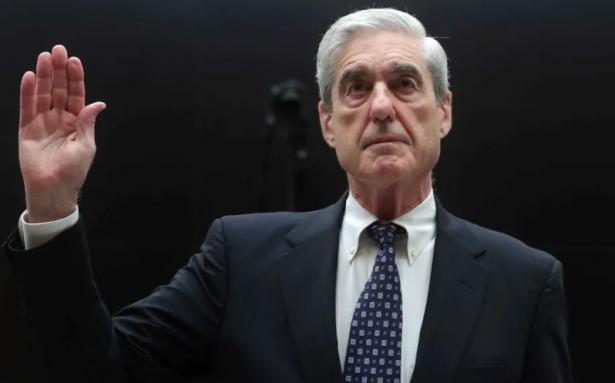 Special counsel Robert Mueller today delivered restrained, responsible, and yet damning testimony to the House Judiciary Committee regarding wrongdoing, lies, and obstruction of justice by the sitting president of the United States.

What was damning was not the evidence that Mueller described, most of which simply confirmed details contained in his report on a two-year investigation into allegations of Russian interference in the 2016 presidential election and obstruction of justice. It was the clarity that the veteran lawman provided in response to basic questions about attempts by the president and his aides to undermine his inquiry. This corrected the ongoing disinformation campaign conducted by President Trump and his attorney general, William Barr.

The critical exchange came at the beginning of the long-anticipated Judiciary Committee hearing on the morning of a day that was later to see Mueller testify before the House Permanent Select Committee on Intelligence. Judiciary Committee chairman Jerry Nadler took Mueller through a series of essential questions regarding evidence contained in part two of the report produced by the special counsel and his team of top lawyers and investigators.

For the purposes of a congressional inquiry that might lead to the impeachment of the president, the questioning with regard to attempts by Trump and his associates to obstruct an inquiry into allegations of political wrongdoing was vital. It got to the heart of the matter of whether the president must be held to account for abuses of power that have historically been understood as impeachable. And, in this regard, Mueller’s testimony was powerful and important. The question is whether the Judiciary Committee and the Congress will treat it as such.

So far, it has not. And that frustrates accountability activists.

“Robert Mueller did his job—and it’s far past time for lawmakers in Congress to do theirs. Today’s testimony is the clearest indication yet that the only path forward is for Congress to immediately begin an impeachment inquiry,” said Sean Eldridge, the president of Stand Up America. “If any other American had committed the crimes detailed in the Mueller report, they would be indicted and sent to prison. Delaying an impeachment inquiry any further does an injustice to the American people—and we implore Speaker Pelosi to stop slow-walking the process.”

Arguing that “we have exhausted other avenues to achieve executive accountability,” Noah Bookbinder, the executive director of Citizens for Responsibility and Ethics in Washington, called for an impeachment inquiry after hearing Mueller’s testimony. “If Congress does not act,” said Bookbinder, “it sends a message to all future presidents that they can violate the Constitution with impunity.”

Eldridge and Bookbinder are right to respond with a sense of urgency regarding the need to initiate a constitutional response to abuses of power.

Nadler elicited responses from the special counsel that can and should figure in articles of impeachment that would target Trump’s lawless acts but that would echo those approved by a previous Judiciary Committee that targeted former President Richard Nixon. To wit:

NADLER: Director Mueller, the president has repeatedly claimed your report found there was no obstruction and completely and totally exonerated him. That is not what your report said, is it?

MUELLER: Correct, not what the report said.

NADLER: You wrote: “If we had confidence after a thorough investigation of the facts that the president clearly did not commit obstruction of justice, we would so state. Based on the facts and the applicable legal standards, we are not able to reach that judgment.” Does that say there was no obstruction?

Nadler pursued the matter further, asking, “Can you explain what that finding means so the American people can understand?” Mueller replied, “The finding indicates that the president was not exonerated for the act he allegedly committed.”

That may not have been a revelation for Americans who read the Mueller report. But it was a conclusion that was so jarring, when stated by a veteran investigator and prosecutor, that Nadler sought a final confirmation of the special counsel’s determination. “In fact,” said Nadler, “you were talking about incidents in which the president sought to use this official power outside of usual channels to exert undue influence over your investigations. Is that right?”

Nadler’s Democratic colleagues on the committee dug into the matter and garnered confirmation after confirmation of the obstruction conclusion. Congressman Hakeem Jeffries took the witness through the elements of obstruction of justice, establishing a shared understanding of the issue. Congresswoman Pramila Jayapal focused on “classic” evidence of witness tampering as part of a devastating line of questioning in this regard. So it was consequential when Congressman Ted Deutch got to the key question. “You found evidence, as you lay out in your report, that the president wanted to fire you because you were investigating him for obstruction of justice,” said Deutch. “Isn’t that correct?” Mueller replied, “That’s what it says in the report. Yes. And I stand by the report.”

Mueller described consequential examples of obstruction. Yet, he also described a United States Department of Justice Office of Legal Counsel memo that limits the options for indicting a sitting president.

So Mueller was constrained. But the US House of Representatives is not so constrained, as Nadler noted. “Although department policy barred you from indicting the president for this conduct, you made clear that he is not exonerated. Any other person who acted this way would have been charged with a crime. And in this nation, not even the president is above the law. Which brings me to this committee’s work. Responsibility, integrity, and accountability: these are the marks by which we who serve on this committee will be measured as well,” said the chairman.

“Director Mueller,” Nadler said, “we have a responsibility to address the evidence you have uncovered. You recognized as much when you said ‘the Constitution requires a process other than the criminal justice system to formally accuse a sitting president of wrongdoing.’ That process begins with the work of this committee.”

And so it must.

There will be endless assessments of the Mueller hearings. But what Mueller said will never matter as much as what the committee does. This is where we find ourselves after years of investigation, months of debate about the report from that investigation, and a day of high-stakes testimony. At this point, we need to think a lot less about Robert Mueller and a lot more about what comes next.

It took too long for Mueller to testify before Congress. He should have appeared before the Judiciary Committee immediately after the report was delivered. Delays allowed Trump and his allies to spin a lie. Some of that lie has now been undone, and several House members, such as Massachusetts Democrat Lori Trahan and New York Democrat Sean Maloney, spoke up for impeachment on Wednesday afternoon.

But whatever momentum may exist at this point will only be expanded and extended if the Judiciary Committee puts a dramatically sharper focus on accountability. The committee’s work must be guided by a faith in the Constitution that, as Nadler suggests, “requires a process other than the criminal justice system to formally accuse a sitting president of wrongdoing.” That is the process of impeachment. And it needs to begin. Now.

Congresswoman Gwen Moore is wise when she observes that Mueller “clearly punted this to Congress and said that we should use our separation-of-powers authority.” The congresswoman, a savvy legislator who does not mince words, recognizes that the special counsel’s report and statements may not specifically outline a path regarding congressional action. But, she says, they provide a clear signal with regard to President Trump, and that is that “It’s our responsibility to impeach him.”

“I don’t think it would serve us well to just continue to place the burden of our constitutional responsibilities on the back of Bob Mueller,” says Moore, who concludes, correctly, that, “Mueller gave us all the evidence necessary to hold the President accountable. Now it’s up to Congress to act.”