The Rise and Fall of Red Vienna

100 years since the Social Democratic Workers’ Party was elected by a restive, war-weary working class, the working class remains restive, but while the SDAP’s flagship Karl Marx-Hof still stands, the bricks no longer seem to be speaking to them. 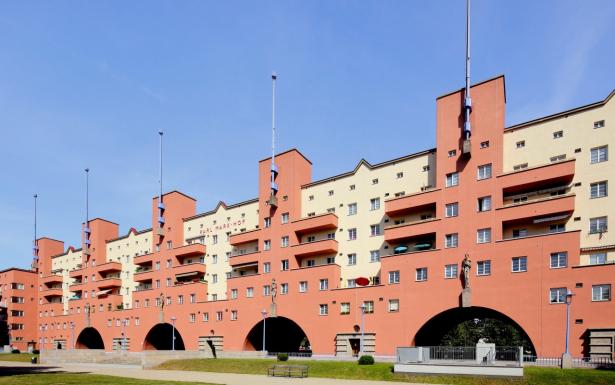 Karl Marx-Hof, a kilometre-long municipal apartment block in Vienna’s wealthy 19th district, was first named after the father of the communist movement by Austria’s Social Democratic Workers’ Party (SDAP) in 1927. Its imposing structure borrows from an eclectic mix of modernist, Bauhaus, art deco, neoclassical and baroque architectural styles. In the mould of early soviet experiments, the building, nicknamed The Palace of the Proletariat, housed shared childcare services, gardens and washrooms.

The building is Vienna’s most prominent physical reminder of a period known as Red Vienna, when left-wing radicals found themselves at the helm of the Hapsburg’s former imperial capital during the aftermath of the First World War.

After the collapse of the Austro-Hungarian dual monarchy in 1918, the SDAP won the fledgeling republic’s first elections held under universal suffrage and commenced an ambitious programme of social and economic reform. Leading intellectual lights of the party sought to unite the two great strands of the 20th-century labour movement, reconciling parliamentary socialism and revolutionary communism under their new current of non-Bolshevik “Austro-Marxism”. Karl Marx-Hof epitomised their radical ambitions. “When we are no longer here”, Mayor Karl Seitz told an assembled crowd of workers at the building’s opening in 1930, “these bricks will speak for us."

When I visited Karl Marx-Hof on a sunny day in June, Monica and George, two of its residents, were walking their two Chihuahuas around the estate’s leafy, quiet courtyards. “We moved here last year,” Monica tells me. “It’s really nice because you’ve got a lot of green space in the middle of the city.”

The young couple are the beneficiaries of a generous system of public housing provision. Vienna has a relative abundance of high-quality municipal flats compared with most large capitals. “We weren’t waiting long for the flat – moving in here was really fast”, Monica says. Currently, 60 per cent of Vienna’s residents live in either municipally owned, subsidised housing, or in social homes run by not-for-profit cooperatives. The remaining portion of private homes is subject to strict rent controls and regulations.

The social democrats and their less radical successors have remained the dominant party in Vienna since the city’s first election, save for an 11-year hiatus of fascist dictatorship from 1934, followed by Anschluss and Nazi occupation from 1938. The city remains a red statelet in an otherwise conservative country. Indeed, Austria is now more associated with the far right than the radical left. But even Vienna is no longer immune to the trend of waning support for centre-left parties that has gripped European countries since 2008, and cracks are beginning to appear in its social democratic project.

Two exhibitions in the city – one in the former communal wash house of Karl Marx-Hof, the other in the grand Wien Museum MUSA – note the achievements of Red Vienna’s experiment in local socialism: the introduction of pensions and unemployment support; the establishment of a nascent public healthcare system; the opening of kindergartens, schools run on Montessori principles, public baths, open-air swimming pools, libraries, parks, leisure facilities, arts centres; and, of course, a programme of mass council house building, all paid for by a system of progressive income taxation coupled with duties on luxury goods, including servants, champagne, private cars and riding horses.

Unlike the Bolsheviks, (and partly because, as a provincial government, it lacked the powers to do so), the SDAP did not expropriate or nationalise factories or private industry without compensation, but instead paid former owners whenever buildings or land passed from private to public hands. The party built what it perceived to be the chrysalis of a new egalitarian society, while leaving the market and private ownership of the means of production largely intact. In many ways, its policies palliated the worst effects of early 20th century industrial capitalism like slum housing, mass unemployment and extreme poverty. Red Vienna laid the ground for the modern European welfare state, inspiring other social democratic governments across the continent to implement similar policies after the Second World War.

“Back then the social democrats were good,” Monica tells me, attempting to calm her excitable dogs by pulling on their leads. Does she intend to vote for the social democrats in the upcoming national elections in September? “We vote for the blue ones,” she answers. Monica and George will cast their vote for the Freheitliche Partei Osterreichs (FPO), the Freedom Party, an organisation founded after the Second World War by a former Nazi minister of agriculture and high-ranking SS officer. “It’s because of all the refugees and all the violence that’s going on here,” she claims. “Shootings are more frequent in Vienna.”

Austria has one of the lowest murder rates in the world, almost half that of England and Wales, and Vienna itself is known for its relative safety compared to other European capitals. But hundreds of thousands of refugees have travelled through Austria over the last four years. Many have made the city their home, but most have transited towards Germany, at Angela Merkel’s invitation. The mass movement of people from across the Mediterranean to central and northern Europe has ruptured the country’s social-democratic pact. In 2016, Norbert Hofer of the Freedom Party narrowly missed out on victory in the presidential election, receiving 46 per cent of the vote.

“Lots of people say they’re just racists,” Monica continues, visibly uncomfortable with the idea that people would attribute malice or prejudice to voters like herself. But she hastens to add that her views, and those of her partner George, aren’t necessarily typical of Vienna’s affluent 19th district. “There are very rich people here, so they vote for the party who protects their interests… You’ll see a lot of big houses, so I think the OVP, the People’s Party, would do well.”

The OVP is the more traditional centre-right party of Austrian politics, and wins the most seats in the 19th district. Yet the city’s voting patterns are diverse. This is partly a result of the policies of successive social democratic administrations placing the integration of social classes and income levels at the heart of their municipal agenda. Subsidised housing can be found alongside wealthy private apartments in the city centre designed by Renzo Piano, and at the foot of the city’s vineyards near up-market wine taverns. Kurt Puchinger, chair of wohnfonds_wien, the city’s land and housing fund, tells me that the council “do not want to have a situation where you can identify the social status of a person by their home address."

Despite the SDAP’s century-long efforts to promote social cohesion, recent years have seen the rise the FPO’s vote share at the expense of the left. Favoriten is a more solidly working class area of Vienna in the 10th district. There, according to Monica, “most vote for the Freedom Party because they are for stopping migration.” She pauses to consider her words. “Not stopping. Trying to find a way to filter them and control them. Every country has a problem like this.”

Monica’s feeling for the electoral preferences of each of the various Viennese districts proves accurate. After the war, Favoriten elected communists as their local representatives. The district’s loyalties quickly switched to the social democrats, and until 2005 the party could comfortably expect to receive over half the votes there, consistently getting more than double the votes of both the far-right Freedom Party and the centre-right People’s Party. But in the most recent 2015 election, the Freedom Party won 24 seats and 38 per cent of the vote, only two points and one seat behind the social democrats. In Austria nationally, the People’s Party, headed by a 32-year-old leader, Sebastian Kurz, with Patrick Bateman overtones, has formed a government with the Freedom Party – but their coalition collapsed ignominiously in May.

Neither Austria as a whole, nor Favoriten in particular, are outliers. In France, Le Pen’s National Rally polls well in the Communist Party’s former “ceinture rouge” outside Paris. In Britain, Labour’s post-industrial heartlands are turning towards the Brexit Party, while blue collar workers in America’s rust belt have backed Donald Trump. And in Vienna, neither the impressive legacy of the SDAP nor the continually high standard of living (the city was rated as the world’s most liveable for the 10th time in 2018 by Mercer, the consultancy giant) is enough to stem the tide of right-wing populism.

Until he was unseated as leader following a corruption scandal in May, Heinz-Christian Strache positioned the FPO as the party of the working class, a guarantor of Austrian identity, and the protector of a generous welfare system now threatened by an influx of migrants. “We believe in our youth,” ran one of his slogans, “the [social democrats] in immigration.”

Sofia is a masseuse who has lived in Karl Marx-Hof for 19 years with her partner and his son. “People are angry with the social democrats now because of refugees,” she told me. “They should change this... They should say ‘we are on the left but we can’t accept everybody here.’” The view that the party have abandoned their traditional voters is widespread, but Sofia isn’t fond of the alternatives. “The FPO – the Nazis – you can’t vote for the Nazis… anyone who votes FPO isn’t my friend… But I won’t vote for the People’s Party because they do everything for rich people, not normal people.”

Sofia reserves her strongest criticism for the youthful Sebastian Kurz, who is likely to become head of another People’s Party-led coalition after elections in September. “I’m scared of him,” she says. “I think he’s a psychopath. I think he’s not a normal person.”

Like many Viennese, Sofia admires the legacy of Red Vienna: “The socialists did a lot of really good things. We are the only city in the world that has so much state housing. And they brought in pensions, health insurance, a lot of things.” But she’s not sure they will get her vote in 2019. In an era of polarisation and anti-establishment rhetoric, the most fertile yet unoccupied political ground seems to be for a radical, redistributive economic programme, coupled with a more conservative vision of shared responsibilities and values, national sovereignty, and sociocultural issues.

“Even in the working class areas of the city,” sighs Kurt Puchinger, the city’s housing fund chair, “less people are voting social democrat. And this is a pity.” 100 years since the old radical Social Democratic Workers’ Party was first elected by a restive, war-weary working class, the working class remains restive, but while the SDAP’s flagship Karl Marx-Hof still stands, the bricks no longer seem to be speaking for them.