This article is from a corporate law firm, but it offers a concise summary of last weeks decision by the NLRB to roll back the rights of workers to engage in protected concerted activity. 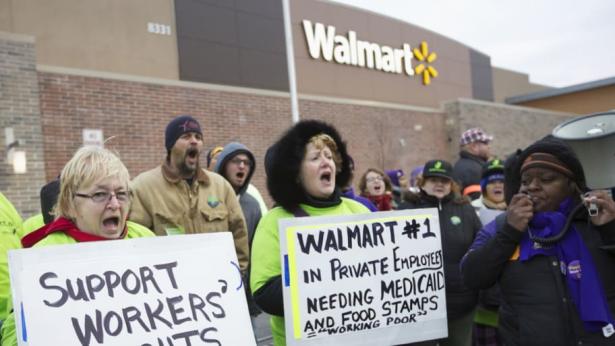 The National Labor Relations Act’s (NLRA or Act) Section 7 grants to all employees — regardless of whether they are unionized or not — the right to engage in protected concerted activity (PCA).  Accordingly, an employer may not punish or take any adverse action against a worker because they engage in PCA. Such adverse action is an unfair labor practice in violation of Section 8(a)(1) of the NLRA.

A strike by more than one employee qualifies as concerted conduct that may also qualify for the protections of the Act. But not all strikes are protected under the law. A strike that violates a contact’s no strike clause is unprotected. Likewise, strikes that are carried out for an improper purpose or in an improper way are unprotected, their concertedness notwithstanding. For instance, partial or slowdown strikes where employees withhold some portion or aspect of their labor, while purporting to be working are unprotected because the law does not sanction an employee’s receipt of pay for time he or she is actually on strike. Likewise, intermittent or repetitive strikes where employees strike for what is typically a short time with the intention of returning to work and then of striking again later may fall outside the law’s protection because such “hit and run” guerilla tactics are not genuine strikes and, thus, are not protected by the Act.

Employees who engage in an unprotected strike or who withhold their services in furtherance of an unprotected strike fall outside Section 7’s protections and are, thus, subject to discipline for their unprotected conduct. Unfortunately, not all strikes are conventional and the line that separates protected from unprotected unconventional strike conduct is often blurred until after an employer takes adverse action based on that strike and resulting litigation is concluded, placing both employees and employers alike at risk if they have incorrectly guessed as to the protected or unprotected nature of a given strike. The National Labor Relations Board’s (NLRB or Board) recent decision in Walmart Stores, 368 NLRB No. 24, dated July 25, 2019, demonstrates this point and may offer a brighter line as to whether and when repetitive work stoppages will qualify as intermittent strikes falling outside the protections of the law.

The Facts in the Walmart Decision

In Walmart, a group of non-union workers banded together to form an organization calling itself OUR Walmart.  Though not officially union represented, these employees received substantial organizational and financial assistance from the United Food and Commercial Workers Union who, at the time, claimed an interest in affecting Walmart’s working conditions and in representing Walmart’s employees and who was actively engaged in a corporate organizing campaign against the company. Beginning in 2011, OUR Walmart’s stated goal was to improve the working conditions of all Walmart employees.  To that end, the group engaged in various tactics for the purposes of publicizing its cause and enlisting the public’s support.  When these measures proved ineffectual, the group changed its tactics and resorted to a highly coordinated and centrally controlled series of concerted work stoppages — all admittedly in furtherance of its mission of improving employee working conditions.  Thus, in October 2012, Walmart workers went out on strikes lasting one to three days in duration. First, in October 2012, approximately 60 employees in certain locations in Los Angeles went on strike. Second, on Black Friday in November 2012, the group called a nationwide strike lasting one or two days in which about 100 employees participated. Seven months later, in late May and early June 2013, 130 employees staged a third strike lasting five to six days so they could travel on UFCW-provided buses to Walmart’s annual shareholders’ meeting in Arkansas to demonstrate. Fourth, on Black Friday in November 2013, there was a nationwide strike involving an unspecified number of employees. The third strike, hereinafter referred to as the “Ride for Respect” or “R4R strike” resulted in 54 employees being disciplined or discharged for violating Walmart’s attendance policy.  It is that discipline which spawned the Board’s recent decision.

Intermittent Strikes — What They Are, Why They Are Unprotected and Why the Law in the Area Requires Greater Clarity

An intermittent strike occurs when employees repeatedly stop work, typically for periods of short duration. From the union/employee standpoint, such “on again/off again” tactics are superior to conventional strikes because it is far more difficult for an employer to anticipate and effectively respond to sporadic work stoppages. Indeed, even if an employer is able to quickly mobilize to address a sudden strike, by the time the employer may have successfully geared up to operate, the work stoppage is over, requiring the employer to either lockout the returning strikers, thereby prolonging the stoppage, or to return strikers to work and to restore the workplace to its pre-strike status quo, leaving the employer vulnerable to yet another quickie stoppage. Moreover, as a practical matter, quickie economic strikers lose less pay due to the shorter duration of their strikes and the shorter duration of their strike means that they are at less risk of being permanently replaced.

Further, even though the Supreme Court declared long ago that the use of recurrent or intermittent work stoppages is unprotected by the Act, Auto Workers Local 232 v. Wis. Emp. Relations Board (Briggs-Stratton) 336 U.S. 245 (1949), whether a series of work stoppages qualify as unprotected intermittent strikes has been unclear under Board precedent. Among the considerations are: 1) whether employees have engaged in a pattern of recurring work stoppages and/or demonstrated an intent to engage in a future pattern of recurring work stoppages; 2) whether the work stoppages occurred over a short period of time and were short in duration; 3) whether the stoppages were part of a common plan aimed at addressing the same goal or dispute; 4) whether the stoppages arose from a union strategy to exert additional economic pressure on an employer; 5) whether the stoppages were part of a scheme to harass the employer into a state of confusion and chaos; and 6) whether the work stoppages arose from a union strategy to exert additional economic pressure on the employer during collective bargaining negotiations. Yet, by placing the burden of proving the unprotected nature of a strike on the employer and by basing its decisions on a case specific weighing and balancing of such factors, the Board has created a confused jurisprudence where factually similar cases that seemingly should have been similarly decided often come down on opposite sides of the protected/unprotected coin. Such unpredictable ad hoc decision-making chills employer’s disciplinary response to intermittent strikes. It also does a disservice to workers who engage in quickie strikes incorrectly believing them to be protected conduct.

Unions, employees and the community action groups who act as their surrogates have all recognized the advantages of intermittent strikes over conventional strikes and are now making increased use of repetitive short term work stoppages instead of conventional strikes as a way of bringing maximum coercive pressure to bear on employers.

Reversing the Administrative Law Judge (ALJ) who refused to consider the R4R strike an intermittent strike and declared it protected because it was neither brief, i.e. five to six days in duration, nor scheduled close in time to a group’s other strikes of short duration, i.e. coming seven months after the group’s Black Friday 2012 quickie strike, the Board found that “the judge [had] failed to recognize that the ultimate [and essential] inquiry in every Board case on the subject . . . has been whether the work stoppage was pursuant to a strategy to use a series of strikes in support of the same goal. Indeed, the proof and the parties’ stipulations showed (and the ALJ found) that OUR Walmart’s members had engaged in a pattern of recurring strikes and demonstrated their intent to engage in such repeat strikes in the future, that many of its strikes were of short duration and that there was nothing indicating that the R4R strike arose from concerns other than those that motivated the group’s other quickie work stoppages – a desire to compel change in Walmart’s employment terms. In the Board’s view, these facts mandated a finding that the R4R strike was an unprotected intermittent strike and that Walmart’s discipline of R4R strikers for violation of the Company’s attendance policy did not violate the Act. It is for that reason, and that reason alone, the R4R strike was found unprotected and Walmart’s R4R strikers were lawfully disciplined.

Walmart stands for the proposition that where a union or employees engage in a series of quickie economic strikes in furtherance of an unchanging goal, those strikes are likely to be declared unprotected, notwithstanding a given strike’s suddenness or its duration and regardless of whether it occurs in close temporal proximity to other related quickie work stoppages. Such strikes are intermittent, meaning that they are unprotected even though concerted and that employees who participate in them are subject to lawful discipline.

While employers never want to be struck, much less the target of intermittent strikes, those who are and who have reason to believe that repeated strikes are aimed at the same goal may abate strike risks by educating potential strikers about Walmart and the risks of unprotected strikes.

Walmart gives employers a far clearer roadmap for determining whether and when repeated strikes are “intermittent” and unprotected under the law. Though no guarantee of lawfulness, discipline of quickie or repeat strike participants is less of a “crap shoot”, meaning that intermittently struck employers may make more educated decisions as to whether and when to discipline employees for engaging in unprotected intermittent strike activity.